All India Medical Service is a laudable effort, but will it help fill the huge gap of doctors particularly in the rural areas The union government is keen to create an All India Medical Service, just like the IAS and IPS.
A letter has been sent to all chief secretaries of the states and union territories to “offer your views on this issue so as to enable the ministry to firm up its proposal”, reported Times of India.
But, the moot question is that whether this will meet the crisis in the healthcare sector where there are a few doctors compared to the number of patients.
A parliamentary standing committee on health and family welfare said that despite having the most number of medical colleges in the world, and currently having approximately 9.29 lakhs doctors enrolled on the Indian Medical Register, India is way behind in achieving the targeted doctor population ratio of 1:1000 as per WHO norms. Shortage of doctors, who are the most important cog in the health care delivery system, has derailed both access to and quality of health care, especially to the vulnerable and poorer sections of the country.
“Though there have been substantial improvements in health outcomes over the years, there are still large gaps in health care accessibility in many parts of the country and Universal Health Care still remains a distant dream,” said the committee in its report tabled in the Rajya Sabha in March 2016.
In India, there are 0.73 physicians per 1000 people.
According to the WHO, in 2001, there were 20,69,540 health workers of which 8,19,475 (or 39.6%) were doctors, 6,30,406 (or 30.5%) were nurses and midwives, and 24,403 (or 1.2%) were dentists. Of all doctors, 77.2% were allopathic and 22.8% were ayurvedic, homeopathic or unani. Other categories of health workers were pharmacists, ancillary health professionals, and traditional and faith healers, who comprised 28.8% of the total health workforce.
The national density of doctors was 79.7 per lakh population, of nurses and midwives 61.3 per lakh, and of dentists just 2.4 per lakh, said the WHO report.
The WHO report also highlighted the urban–rural disparities.
“There were 12,25,381 health workers in urban areas and 8,44,159 in rural areas, an urban–rural ratio of 1.45.”
The crisis in healthcare sector is not a new development. 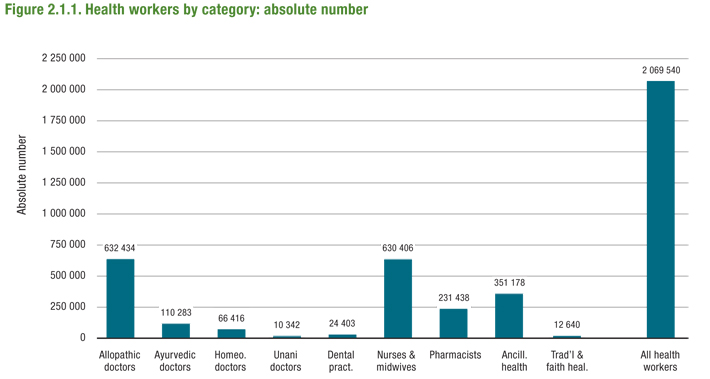 The second five year plan 1956-61 observed that the number of medical colleges has increased from 30 in 1950-51 to 34 in 1954-55 and 42 in 1955-56.
“Annual admissions have increased from about 2,500 in 1950-51 to about 3,500 by 1955. The present training facilities provide for an annual out-turn of about 2,500 doctors during the second plan. There are at present 70,000 qualified doctors in India and about 12,500 doctors will qualify during the second plan. As against this, the number of doctors needed will be about 90,000. It is considered essential that more training facilities should be provided during the second plan so that this gap may be filled.”
Decades later, the situation continued to be grim. The plan panel in 2008 said that India needs 600,000 more doctors.
The situation is particularly bad in the public healthcare sector, the commission said.
The public healthcare has been on a serious decline during the last two or three decades because of non- availability of medical and paramedical staff, diagnostic services and medicines. The situation in availability of specialist manpower in Community Health Centres is particularly bad as against the sanctioned posts. About 59.4 percent surgeons, 45 percent obstetricians and gynaecologists, 61 percent physicians and 53 percent paediatricians were not in position, reported rediff.com citing the report.
A Lancet report drove home the point, when it said that the number of doctors registered by different state councils stood at 6,68,131 during the year 2006 giving a doctor to population ratio of 60:100000.
The state wide distribution of doctors was also highly skewed with certain states like Karnataka and Union Territories such as Delhi and Goa having a favourable ratio and other states like Haryana, Bihar and Uttar Pradesh being under-served. If the targeted doctor population norm is taken as 1:1000, there is a requirement of at least 600,000 doctors, said Lancet.
These shortages exist despite India having one of the largest medical education systems in the world, with more than 410 government and private medical schools having an annual intake of 50,000 students for MBBS courses. City-bred and educated doctors are not willing to serve in rural areas, many of which still lack electricity and roads.
Union health minister JP Nadda admitted on September 6, 2016: “India’s large and diverse population is a formidable challenge. We know that many countries of this region including India, as well as of the world, are grappling with challenge of shortage of health workforce.”
“India is at the crossroads of rising costs of healthcare and growing expectations of the people. We are facing a rise in non-communicable diseases. In India, high rates of tobacco use and hypertension prevalence in adults are risk factors contributing to this growing problem,” he was quoted as saying in The Indian Express.