The score improves across most pillars of competitiveness, particularly infrastructure, higher education and training, and technological readiness India ranked 40th in the World Economic Forum’s Global Competitiveness Index 2017–2018, slipping one position from last year.
India (40th) stabilizes this year after its big leap forward of the previous two years. The score improves across most pillars of competitiveness, particularly infrastructure (66th, up two), higher education and training (75th, up six), and technological readiness (107th, up three), reflecting recent public investments in these areas, said the Global Competitiveness Report 2017–2018.

The quality of institutions has increased further, especially in terms of efficiency of public spending  (20th), but the private sector still considers corruption to be the most problematic factor for doing business in India, it said.

The Global Competitiveness Index (GCI), which tracks the performance of close to 140 countries on 12 pillars of competitiveness, said that Asian economies were less exposed to the global financial crisis, but they are facing new problems of their own. 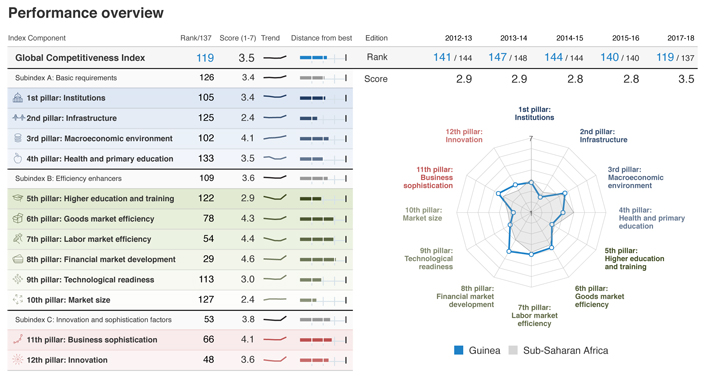 “Amid a private-sector credit boom in India, the proportion of loans classed as non-performing went from 4 percent to 9 percent in two years; in China, business credit is building up similarly to the United States precrisis, and could be a new source of vulnerability. African banks, although not hit severely 10 years ago, have recently been affected by the weaker global financial system and lower commodity prices—a factor also impacting the solidity of banks in Latin America.”

Among the emerging markets seen as having great potential in the early 2000s, Brazil and Turkey have now lost much of the ground they gained before 2013, but China, India, and Indonesia continue to improve, noted the insight report.

Other sources confirm the growing importance of China and India as centers of innovation. “Three Indian locations appear in the top 100 of the cluster study: Bengaluru at 43rd (with patent activity focused on computer technology), Mumbai at 95th, and Pune at 96th (both registering among the most patents in organic fine chemistry).”

The report goes on to say that as we approach the 10th anniversary of the global financial crisis, the world economy is showing encouraging signs of recovery, with GDP growth accelerating to 3.5 percent in 2017.

“Despite this positive development, leaders are facing major predicaments when it comes to economic policy. Uneven distribution of the benefits of economic progress, generational divides, rising income inequality in advanced economies, and increasing environmental degradation have heightened the sense that the economic policies of past years have not served citizens or society well. Coupled with growth rates that remain below historical levels, these quandaries put many prevalent models of economic growth and related policies into question. Major technological disruption and the new fault lines emerging in the global economic and political order add further uncertainty about the types of policies that will make economies future-proof. Taken together, all of these factors are challenging decision makers to find new approaches and policies to advance economic progress.”

The emerging consensus, the report said, is that economic growth once again needs to focus more on human well-being. Such human-centric economic progress is multidimensional by nature—it is broad based by benefitting the vast majority of people, environmentally sustainable, and equitable in terms of creating opportunities for all and not disadvantaging future generations. In this new context, competitiveness remains an important contribution to the broader goal of human-centric economic progress by creating the resources needed for increased well-being, including better education, health, and security, and higher per capita income.