From Dependence to Self-Reliance: Mapping India’s Rise as a Global Superpower

Bimal Jalan, a former governor of the Reserve Bank of India (RBI), has been one of our finest commentators on economy, known for lucid and reader-friendly analysis. In recent years, he has authored three books that give a broad-brush outline of India’s contemporary economic history: ‘India After Liberalisation: An Overview’ (2021), ‘India Reckoning: Rewards and Discontents of Democracy’ (2021), and ‘India Then and Now: An Insider’s Account’ (2020). His latest work, ‘From Dependence to Self-Reliance: Mapping India’s Rise as a Global Superpower’, “continues the strand of thought of” those three works, as he writes in the preface. 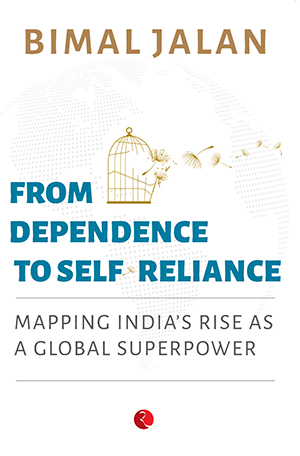 In particular, the new book aims to add to “the ongoing debate about India’s approach to future economic growth, as well as governance and political issues in the twenty-first century”.

With the BJP government in the second term with an unprecedented popularity across the country and majority in Parliament, the political profile of the government has undergone a major change. The government, with an unambiguous mandate, is now in a position to launch political reforms on its own without relying on the discretionary powers of members belonging to other parties. ‘From Dependence to Self-Reliance’ sheds light on some of the priorities that the government can implement at present, as well as in the future, in light of past experience.

Based on extensive research and data, this book provides a way forward to developing India as an economic stronghold. Its ten chapters are divided into three sections: Economy, Governance and Politics, covering a gamut of changes that have taken place since India gained independence and how these changes have had a ground-breaking impact on the development of the nation. It is a must-read to gain an in-depth understanding of India’s rise to power in the realm of economy, politics and technology.