John Maynard Keynes and the difficulty of escaping old ideas

In his new book, ‘The Power of Thoughts’, Swami Mukundananda shares secrets of creative thinking – and also of harnessing one’s thoughts for greater success, clarity, and peace of mind The Power of Thoughts

World-renowned spiritual teacher and bestselling author Swami Mukundananda is publishing his new book, ‘The Power of Thoughts’ (Penguin Random House India) this month. Coming after the bestselling ‘The Science of Mind Management’, the new work shares secrets of harnessing one’s thoughts for greater success, clarity, and peace of mind.

A guide to mastering one’s thoughts for self-discovery and for fulfilling the purpose of life, revelation, and a true ‘marg darshan’ for this generation and many more to come, ‘The Power of Thoughts’ has received some fantastic early praise.

“The book has two parts to it. In the first half, I have dealt with thoughts that harm us and techniques for eradicating or sublimating them. In the second half, I have explained strategies to unleash your thinking to live life to the fullest. I hope you have a magnificent enlightening journey as we proceed together through the pages of the book,” says Swami Mukundananda. 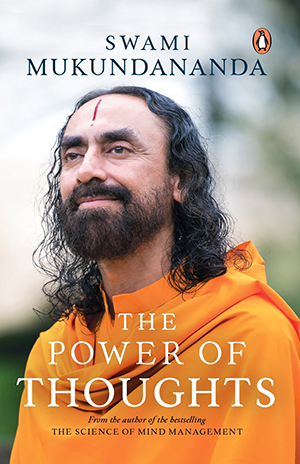 The ‘Power of Thoughts’ is written with the sincere aspiration of explaining the ancient science of the mind and intellect in a modern context—with present-day scientific research. It takes you on a thrilling journey with real-life examples, humorous stories, sound logic, and verses from sacred texts. In the process, you learn to utilize the immense energy of your emotions to make your life happier and more successful.

Incredibly, the ingredients of a hugely successful life cost nothing at all. In fact, we mass-produce 60,000 of them every day. These are the thoughts that our mind creates. They are responsible for the happiness and distress we experience. They are the precursors of all we do. We grapple with improving our actions, only to find our attempts undone by impure thinking. If we focus on transforming our thoughts instead, incredible results will accrue from a fraction of the efforts. Since all aspects of our life are so strongly linked to our thoughts, we have much to gain by deepening our understanding of them.

Swami Mukundananda earned his degrees from the prestigious IIT Delhi and IIM Calcutta but chose to renounce a promising corporate career and embrace monkhood. He studied Vedic scriptures at the feet of Jagadguru Kripaluji Maharaj. For almost four decades now, Swami Mukundananda has been sharing his vast knowledge through his books, lectures, and life-transformation programmes. Swamiji meets hundreds, even thousands, of people every day from all walks of life. His steadfast positivity exudes hope, clarity, and a sense of purpose for those who connect with him. He has deeply affected the lives of millions of people who have been drawn to his profound integrity, charismatic personality, and passion to serve. Those who meet him experience his genuine care, and compassionate personality, and also feel deeply touched by him.

Swamiji’s lectures are humorous, his arguments logical and well-laid-out, and, most of all, his advice is practical. His lectures on social media platforms are loved and followed by millions. Swamiji divides his time between India and the US.

Here is an excerpt from the new work:

People search the world for treasures without realizing the biggest gold mine exists within.
Veritably, the ability to think well is the single biggest asset you can possess in life, if only you
learn to manifest its potential by becoming a better thinker. Banks can fail, share markets can collapse and economies can regress, but in our thoughts, we possess a treasure chest that will never bottom out.

No matter how dire the circumstances, this personal gold mine can provide us solutions and remedies, ideas and prospects.

Hence, our biggest and most reliable investment is the ability to think effectively. This treasure chest of thoughts is, in fact, the most accessible because it exists right between our ears. Yet, the paradox is that so few people discover and utilize it.

Why isn’t every other person a thought leader, a creative writer or a visionary? Why are only a few people enriching themselves with their thoughts? The reason is that purposeful thinking is difficult. One of the best businessmen in Western history, Henry Ford, put it very well: ‘Thinking is the hardest work there is, which is the probable reason why so few engage in it.’

Ralph Waldo Emerson, the Age of Enlightenment philosopher from USA, posed a question and then answered it, ‘What is the hardest task in the world? To think.’

If anyone ever told you thinking is easy, do not believe them. They feel that way because they are reactive thinkers. However, focused creative thinking requires tremendous intellectual effort. So, let us learn how to think better.

When we deliberately pause, we provide ourselves the leisure to reflect, learn and grow. Such deliberate pausing with intention enriches our thinking. Learning catches up with us and understanding dawns.

Most people put purposeful thinking on the back seat, while daily chores take precedence. However, without sufficient thought, they hurt themselves. A Sanskrit aphorism states: avivekaḥ paramāpadām padam ‘When you act without thinking, you set yourself up for disaster.’

So, punctuate your day with pockets for thought and reflection. Before you rush into a meeting, schedule ten minutes to ponder about the implications and strategies. If you are a busy person, a great strategy is to block out time every day for just thinking. This is your ‘sacred space’ in terms of time.

Mass thinking is easy; it is what the sheep do. I remember a riddle about sheep from childhood. This is how it goes:

Ten sheep were grazing by a railway track in the countryside. Five of them jumped on to the track and crossed over to the other side. How many were left behind?

That is simple. If five went to the other side, then five remained.

Wrong! The remaining sheep copied the others and also crossed over.

This is how sheep behave. While walking, they push their nose into the tail of the one ahead and walk. It is rare to see a sheep by itself. When it comes to thoughts, we tend to behave in a similar fashion.

We have no qualms about adopting others’ thoughts because it saves us from the mental exertion of thinking ourselves. If we were requested to wear our neighbour’s undergarments, how outraged we would be! But, in our head, we do not hesitate to blindly wear the ideas and perspectives of others. This paradigm of popular thinking prevents us from mining the gold mine of our own thought processes.

Most people adopt this option of majority thinking because it feels secure and safe. ‘If the masses are doing it, then it must be right.’

A story is told of the British House of Commons. For seventy years, for a reason nobody seemed to know, an attendant would stand by the stairway. Everyone assumed that if he was standing there, it must be for a good reason. Finally, someone decided to check on it. He discovered the job had been in the attendant’s family for three generations. It had begun when the current attendant’s grandfather was assigned the task of manning the spot. The stairway had just been painted and his job was to warn people about it. The paint had subsequently dried up, but not the job!

Galileo came soon after Copernicus. He too did not subscribe to conventional thinking. Two thousand years before him, Aristotle had said that heavier objects fall faster towards the earth. Hence, if two objects were taken to a great height and dropped, the heavier one would reach the earth first.

Aristotle’s theory was incorrect, but everyone accepted it as an infallible truth. It only required one original thinker to try it practically. But two millennia went by after Aristotle, and nobody ever thought of questioning his statement until Galileo challenged it!

His intention was to prove Copernicus’ heliocentric theory of the universe. For that, he asserted thattheir fall (provided the air drag was negligible). Galileo gathered a crowd of scholars at the base of the Leaning Tower of Pisa. Then he went to the top and dropped two unequal weights; both landed at the same time.

The scholars saw the evidence with their own eyes, yet they refused to believe it. They continued to assert that Aristotle could not be wrong. They were stuck in the trap of popular thinking. Fortunately for modern science, Copernicus and Galileo did not subscribe to the dictum, ‘everyone thinks like this, so it must be right’. In fact, any scientist who made new discoveries could do so only by challenging the prevailing beliefs.

John Maynard Keynes, the economist whose ideas revolutionized how governments handled their economies, expressed it aptly. He said: ‘The difficulty lies not so much in developing new ideas as in escaping from the old ones.’