Not in the darshans or the shastras but in the living bhakti of a devotee’s soul, in this excerpt from Adi Varuni’s new book From a manuscript of Mundaka Upanisad (Image: Courtesy Sarah Welch/WikiCommons)

Somewhere Among the Stars: Reflections of a Mystic 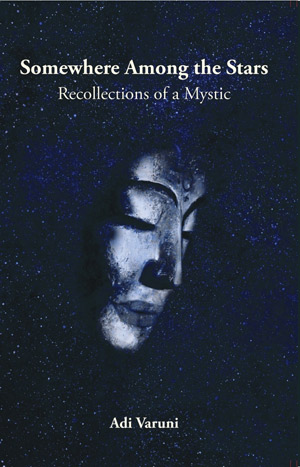 Decades ago, when an unknown Norwegian teacher wove nuggets of philosophy into a mystery, it gave birth to the all-time bestseller, ‘Sophie's World’, in which Sophie, all of 14, returns from school one day to find two letters, each with a question—'Who am I?' and 'Where does the earth come from?' Sophie felt her brain stirring as she contemplated philosophy.

In ‘Somewhere Among the Stars: Reflections of a Mystic’, Adi feels his soul stirring as he contemplates Vedanta. Falling in love with the elderly and serene Ahana, a voice in his head compels him to write Ahana's story, bringing alive fascinating dimensions of Vedantic mysticism. When she recounts her meetings with Krishna, 'my Krishna', across epochs and universes, Adi is spellbound, and restless to understand Krishna's answers to Ahana's questions.

When it suddenly falls into place for Adi that it was Ahana who had brought him to Almora and to Vedanta, and that he has veiled memories with her in past lives, he knows he has to go back and ask her one last time.

As Ahana gradually absorbs into silence, this Sophie's World meets Vedanta mesmerizes you with its depth. If there ever was a beautiful, simple story to introduce Vedanta and explain our existence, then this is the one.

Here is a book that delves into the concept of consciousness, reality, space and time from a Vendantic perspective, chronicles a woman's journey for love and truth. As the story unfolds, it takes the reader on the journey of self-exploration, discovery and self development.

‘Somewhere Among the Stars’ was released last year and is being formally launched at the Jaipur Literary Festival (JLF) this week.

It was a sunny winter’s day in Almora, the sky a clear blue. Ahana and I were walking leisurely up a small road leading from the Kutir towards the outskirts of the town. It was lovely to be outdoor that day in the cool bracing mountain air. I had my portable recorder with me, ready to use in case Ahana got into the mood for a conversation. She usually preferred quiet walks, but, with her, you never knew. You only had to strike the right chord.

We walked about a kilometer till we came to a small rest house along the road where Swami Vivekananda had once fainted from hunger and exhaustion during his journey through the Himalayas. There was a faint breeze carrying a strong fragrance of dry pines. Ahana sat down on a small boulder and closed her eyes. She breathed in the air deeply and then opened her eyes, smiling at me.

“I can sense a question in your head, Adi!” she said.

I smiled back, knowing full well she would catch on to my question sooner or later. This was the opportunity I was waiting for. “I do have a question, Ahana, and it has been going on in my head for a couple of days now. May I ask?”

“Go ahead!” she said, her smile widening. “And thank you for allowing me my quiet walk.”
“I was listening to a visiting swamiji at the Kutir the other day, and he was talking of Vivekananda’s Vedanta, and he said it was different from the Vedanta of Ramana Maharshi. How’s that? How can the Vedanta be different?”

“But what is Vedanta?” Ahana counter-questioned. “Let’s start with that.”

“Advaita Vedanta,” I answered, “Ekam evadvitiyam Brahman? The Divine is the one sole reality without a second: non-duality.”

“That is the philosophy, and the mind understands it well; but the mind can never really grasp non-duality because it functions in duality. To grasp anything real of non-duality, one has to go above the mind.”

“Or above the self, at any rate. You see, as long as there is a knower, there will be duality. The knower is the duality.”

“But how can anything be known or experienced without a knower, an experiencer?”

“As long as there is the mechanism of knowledge and experience, there is a duality — do you see that? Brahman becomes the object of experience or knowledge and a so-called self, other than Brahman, becomes the knower or experiencer. If it’s ekam evadvitiyam, how do you explain the duality?”

I shrugged. “Does it mean that Brahman, the supreme Self, can never be known, experienced?”

“By whom is the question, Adi. Who is there to know Brahman outside of Brahman?”

“Yes, that I can see. Logically, it is true — there can be none outside of Brahman.” The matter clearly seemed outside the scope of reasoning. Ahana was looking intently at me, trying perhaps to fathom the mind, glimpse its inner workings. But then the confusion seemed to clear up. It seemed that someone was adjusting the lens of my buddhi and bringing things to a sharper focus.

“Brahman cannot be known or experienced as the other, and therefore cannot be described or explained,” Ahana added. “This is why the sages have said that he who tries to describe Brahman is a fool, and he who tries to understand Brahman, through another’s description, is a greater fool.”

“So why do the shastras go on about Brahman?”

Ahana smiled. “The knowers of Brahman have sung of him, not philosophized. When you come to know love, you break into poetry, not philosophy. And the poetry too is not to be taken too literally. Always remember, each comes to Brahman according to his or her swabhava. So, none knows that absolute Brahman!”

“You never really studied Vedanta, did you?”

“My Vedanta came from Krishna. I never needed to study it. I made no attempt at philosophy. The path Krishna opened for me was through love and silence.”

“I don’t like labeling these things, Adi. In labeling, one loses the essence.”

“But still, Ahana, you have mentioned bhakti several times in your notes and conversations. Bhakti does have more meaning for you than jnana or even karma!”

“If you insist,” Ahana said in an amused tone. “Bhakti is love, just another name for love. When you love Krishna, it is bhakti. Simple, isn’t it?”

“Isn’t there a difference between love and bhakti?”

“What is the difference? Love, when it seeks something in return, is kama, desire; and when love seeks no return, when it becomes an entire self-giving, it is bhakti. That is all!”

“When you give yourself entirely to Krishna, Krishna too gives something of himself to you, and then you know him in your soul, more intimate than your inmost thoughts. That knowing in your soul is the true jnana.”

“So, jnana is the flowering of bhakti?”

“That’s a poetic way of saying it,” she smiled at me. “You can put it down in your book!”
I smiled back. “And what is karma for you, then?”

“Serving the one you love is karma. What else can it ever be?”

“Yes, I understand that perfectly,” I said. “Serving the one you love without any demand or expectation of return. Nishkama karma?”
“You will make a good acharya, Adi!” she laughed again. “But yes, what you say is true.”

“I don’t get it. I thought you were an advaitin?”

“Advaitin?” She cocked up her eyes. “Just because advaita realizations have come to me doesn’t make me an advaitin. This blessed universe, down to the smallest possible atom, was made for Krishna’s love...and how in heaven’s name are you to love if you were to cease in some eternity of non-duality?”

I sat up. It was rare to hear Ahana speak with such passion. It made her look enchanting, almost like a goddess.

“This is quite a different understanding of Vedanta!” — was all I could say in response. And perhaps, no response was needed.

She quieted down almost immediately and smiled at me, serene as ever. “Adi, Vedanta is not a fixed thing...actually, there is no Vedanta, there is only the one that seeks the truth of things, the truth of being...lest you misunderstand, I have found my truth in my love for Krishna, and so my Vedanta, if you must call it that, is my coming to Krishna. But for another, that may not be Vedanta at all. And I have no quarrel with that. To each his own.”

And I understood then that the true sadhana of Vedanta is not found in the darshans or the shastras but in the living bhakti of a devotee’s soul, the intense intimacies of her heart, and in the flaming inspirations of her mind. I understood, too, that Vedanta is not the system, not the darshan, but the devotee herself. Suddenly, it made a lot of sense. I smiled to myself; I had found the rasa of Vedanta.

[The excerpt reproduced with permission of the publishers.]