Who will win UP polls, why: This book can help you figure it out 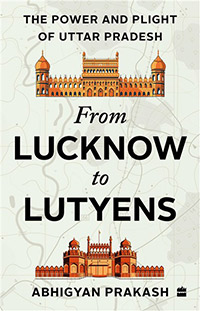 From Lucknow to Lutyens: The Power and Plight of Uttar Pradesh
By Abhigyan Prakash
HarperCollins, 272 pages, Rs 599


With the final phase of voting on Monday, UP elections conclude and with it – in the parlance of journalism – the most important event since 2019 and before 2024. Actually, every assembly election in Uttar Pradesh is considered the most important political event between two Lok Sabha elections.

A disproportionate number of India’s prime minister have come from that state, though the influence it wields on national political discourse is certainly not disproportionate to the number of MPs it sends to the Lok Sabha.  In any case, with a population that would make it the fifth most populated in the world if it were a country, UP elections should seen as an event of global importance.

But deciphering the undercurrents, who is winning where why, is a complicated exercise. It might be somewhat obvious for the people of the state, who must have been tirelessly discussing the fate of this or that party for months now. It is not obvious for outsiders. Understanding UP could be very much rocket science. There are castes and communities and their implicit party preferences. The numbers might be static but their political leanings can never be the same – otherwise every poll would throw up broadly the same results.

And caste cannot be the sole factor. There are roti-kapada-makan issues, not to mention the BSP – bijli, sadak, pani. This time, law and order is as much an issue as the role of religion in public sphere. The public health infrastructure might be point on the mind of the voter, amid the pandemic.

More importantly, an issue cannot be seen in the present light alone; there is always a back story. Abhigyan Prakash, a veteran TV journalist, in his ‘From Lucknow to Lutyens’ narrates that overarching back story of the state. His question is less related to the immediateness of elections, and more to the long-term conundrum: How come a state with so much political heft has consistently failed, right since independence, to achieve its potential in economic and developmental terms?

Still, when we all sit before the TV sets and computer screens on March 10, this book could be a very helpful resource in making sense of it all.