Caring for the elderly Seven metallic beds line along a narrow lane in Nihal Vihar slums in west Delhi. A van turned into an ambulance and a flex banner indicate that these belong to Sai Vridh Ashram (old age home). The building opposite the beds is home to more than 45 elderly men and women, most of whom do not remember who they are or where they come from.

Tarkeshwar Singh, 53, and his wife Pratima Devi have made it their mission to give these elderly the best care they can. Years of deprivation and neglect have reduced many men and women, who take shelter here, to skeletal frames. When they defecate on the bed, Singh cleans them himself.

“It is not hunger that kills them, it is lack of care,” Singh says, remembering the days when he met with an accident on a railway track in Delhi and had to spend a whole night and day on a road, injured. “People threw food at me. But no one bothered to stop and ask me why I was on the pavement,” he recalls. He was finally taken to a hospital by a hospital staff who then contacted his wife and children in Bihar.

After the accident that left him partially handicapped, he devoted his life to the need of the poor, elderly, handicapped and the orphaned. He cannot lift his right arm and left leg without support. Yet, he single-handedly carries, cleans, and feeds the elderly in his ashram. Sometimes families who can no longer take care of their elderly leave them at his doorsteps. Police send here the missing persons whose homes they cannot trace.

Living in a slum himself, Singh’s tireless efforts since 2006 don’t wane even if the donations dry up. He has given up hope for any institutional funding and no longer believes what local political leaders promise him. He suppresses his anger, if at all these leaders visit the ashram, but his doors are always open to the destitute, homeless and abandoned persons whose pain and suffering he can relate to. 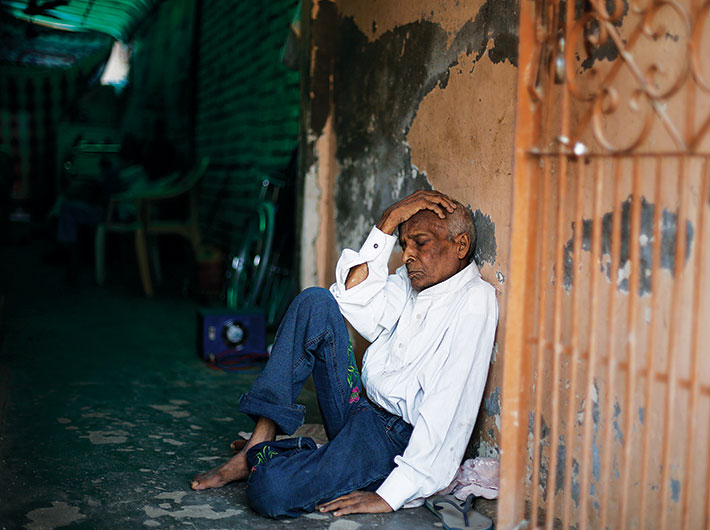 Vijay Kumar has lived a life of extremes. He has spent nights on footpaths and in five-star hotels. On January 26 he will turn 72. With a masters in psychology and English and diplomas in French, Italian and German, Kumar worked with the tourism department in Agra. It’s not clear how he landed at the ashram a couple of months ago, because of his faulting memory. An avid traveller and reader in his youth, Kumar has just one wish now: he wants someone to give him space in their house where he can store his invaluable collection of books on medical sciences, philosophy, psychology and foreign languages. 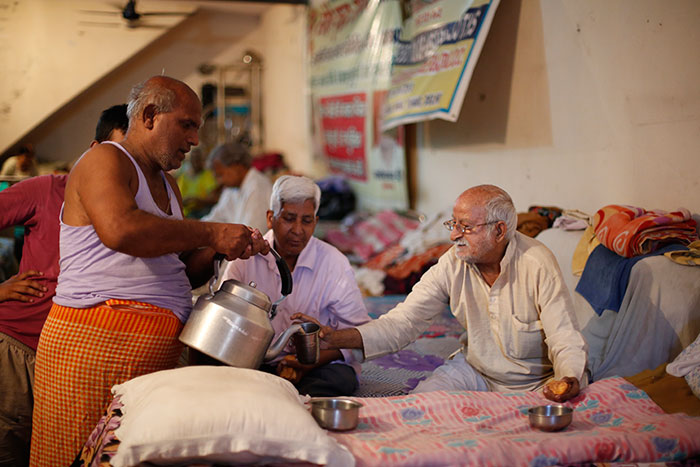 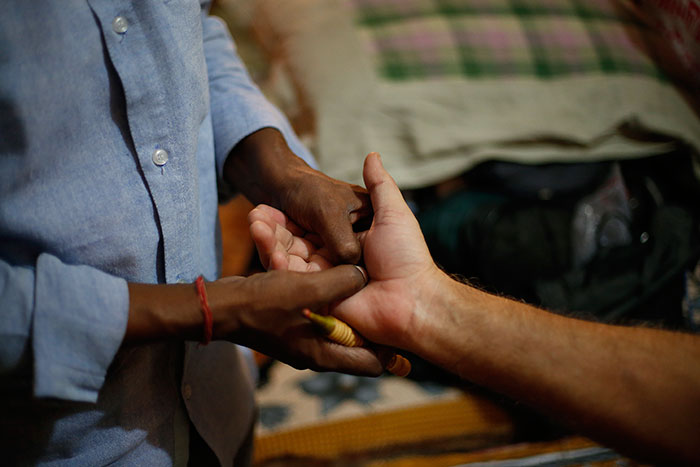 Accupunture therapy to the elderly at the ashram is routine. 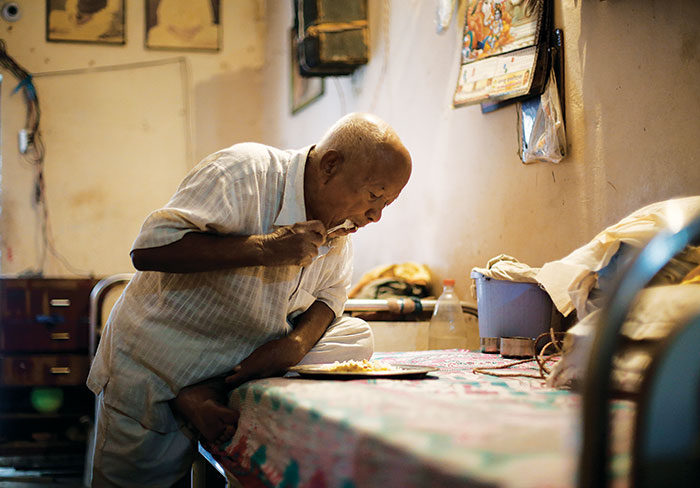 Kalu Singh, 74, likes to keep his surroundings clean. A native of Nepal, he moved here from Mumbai three years ago after a relative guided him. He is hard of hearing but that did not keep him from making friends at the ashram in no time. 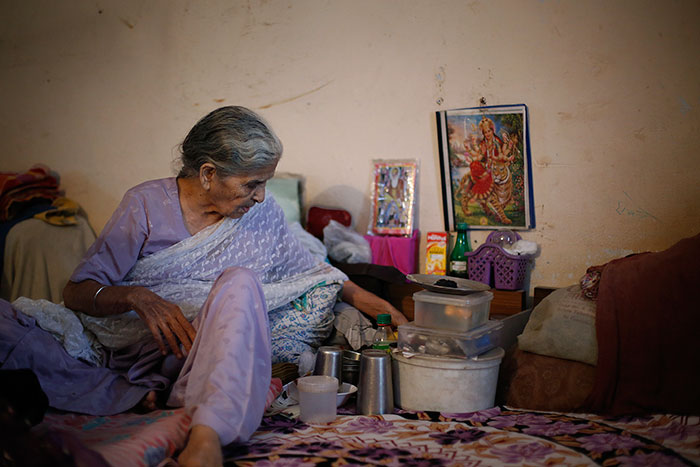 86-year-old Ravinder Kaur’s seven daughters and two sons have never visited her in three years since she moved to the ashram from Meerut. The ashram’s care and her late husband’s military pension are the only things she survives on. 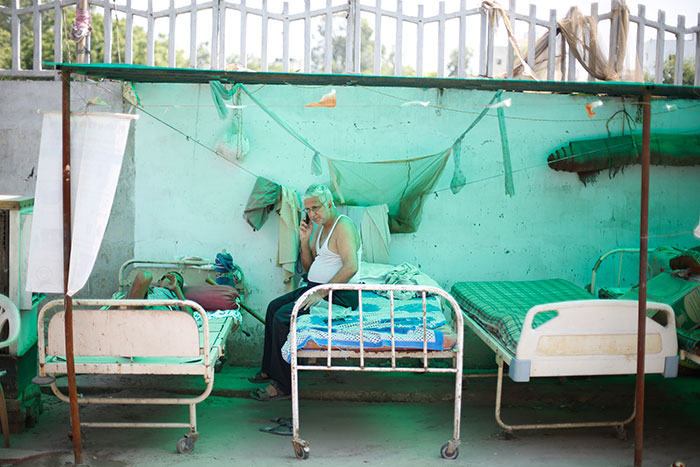 The only open space the ashram occupies is this small section on the road where the elderly spend time in the evenings. This space also occupies the extra beds the ashram has and little belongings the elderly bring with them. 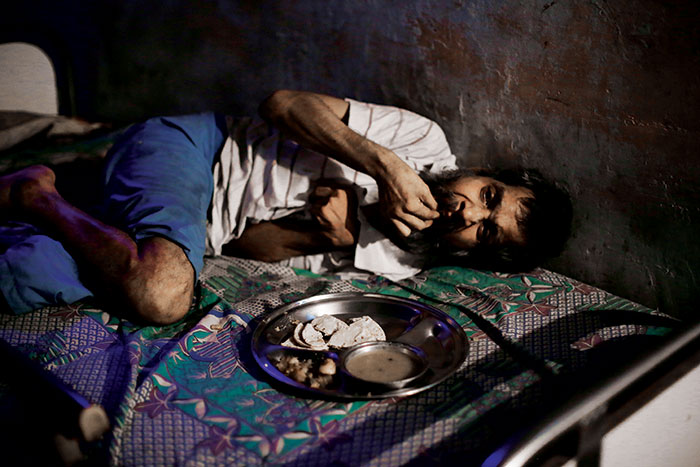 Anil was spending his days as a homeless on the streets of Udyog Nagar in west Delhi. His illness had made him speech impaierd and he could barely move his limbs. When Singh received a phone call about Anil’s condition four years ago, he brought him to the ashram. Anil was 27-year-old then and is  completely dependent on Singh. 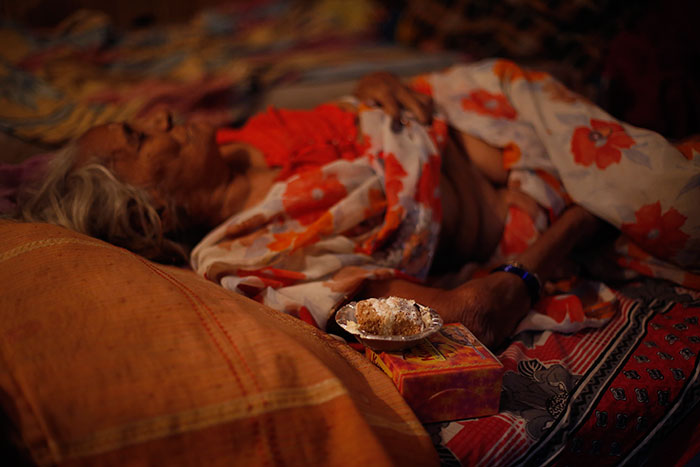 A donor’s birthday brought cake to the ashram but 75-year-old Lakshmi’s stomach cramps would not let her eat it. 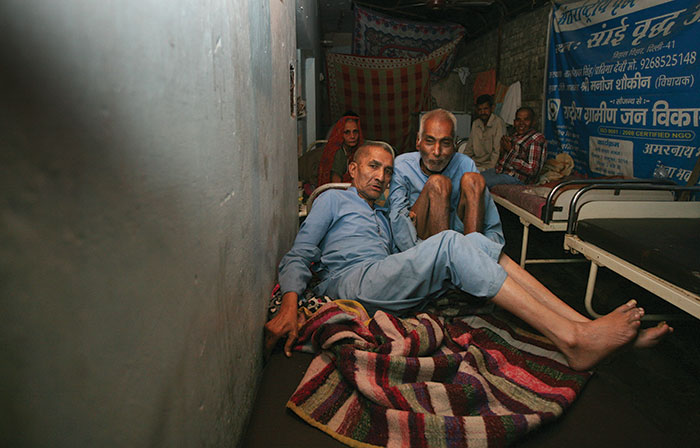 Nand Kishor (left) used to stay with his sister and her family before he suffered from paralysis last year and became dependent on them. He was shifted to the ashram about three months ago. He shares his bed here with Mauji Ram. 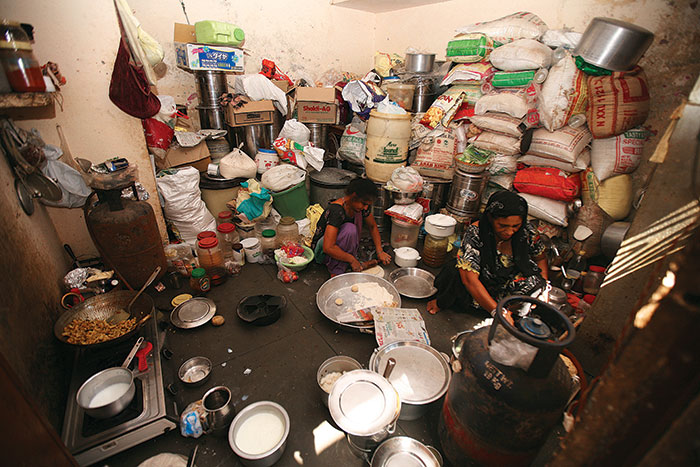 Volunteers at the ashram’s common kitchen prepare an afternoon meal with the items donated. 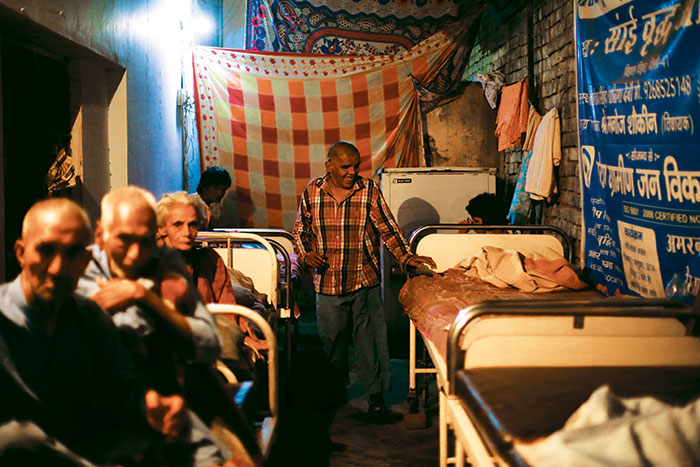