Age of Anger: A History of the Present
By Pankaj Mishra, Juggernaut

A ground-breaking book by one of the foremost global thinkers of our times, Age of Anger goes back to the eighteenth and nineteenth centuries to explain the roots of the hatred, racism and violence widely seen today. This work promises to become the talking point in current debates over the aam aadmi’s anger – against globalisation, against democracy, against economic stress and against the Other.

Former Jammu and Kashmir chief minister Omar Abdullah’s first book, part memoir, part history and part analysis of the various problems that have beset Jammu and Kashmir in the decades since Independence, will be one of the most important books to be published about the beautiful and troubled state that was born in fire and blood. My Kashmir will not only offer the reader unprecedented clarity about the situation in Kashmir today, it will also offer rare insights into Kashmiri politics and the Abdullah family, which has played a prominent part in shaping the discourse on Kashmir.

A Time of Madness: A Memoir of Partition
By Salman Rashid, Aleph Book Company

The author, whose family fled Jalandhar for Pakistan, lived in the shadow of that tragedy for decades, until, in 2008, he made the journey back to his village to uncover the truth about the horror and massacres of 1947. A Time of Madness tells the story of what he discovered, with great poignancy and grace. It is a tale of unspeakable brutality, but it is also a testament to the uniquely human traits of forgiveness, redemption and the resilience of the human spirit.

Indians: A Portrait of a People
By Shashi Tharoor,  Aleph Book Company

Who are we and why are we the way we are? Shashi Tharoor sets out to discover the truth about us Indians on the seventieth anniversary of our existence as an independent nation. He examines our habits, food, languages, customs, religions, attitudes towards one another and foreigners, culture, history, gods, celebrities, pet peeves, obsessions and a whole lot more.

A sharp investigative account of how the shadowy Sangh Parivar operates. It will answer with hard evidence the question: Is there any truth to the conspiracy theories that surround the RSS and the BJP which are now in power? 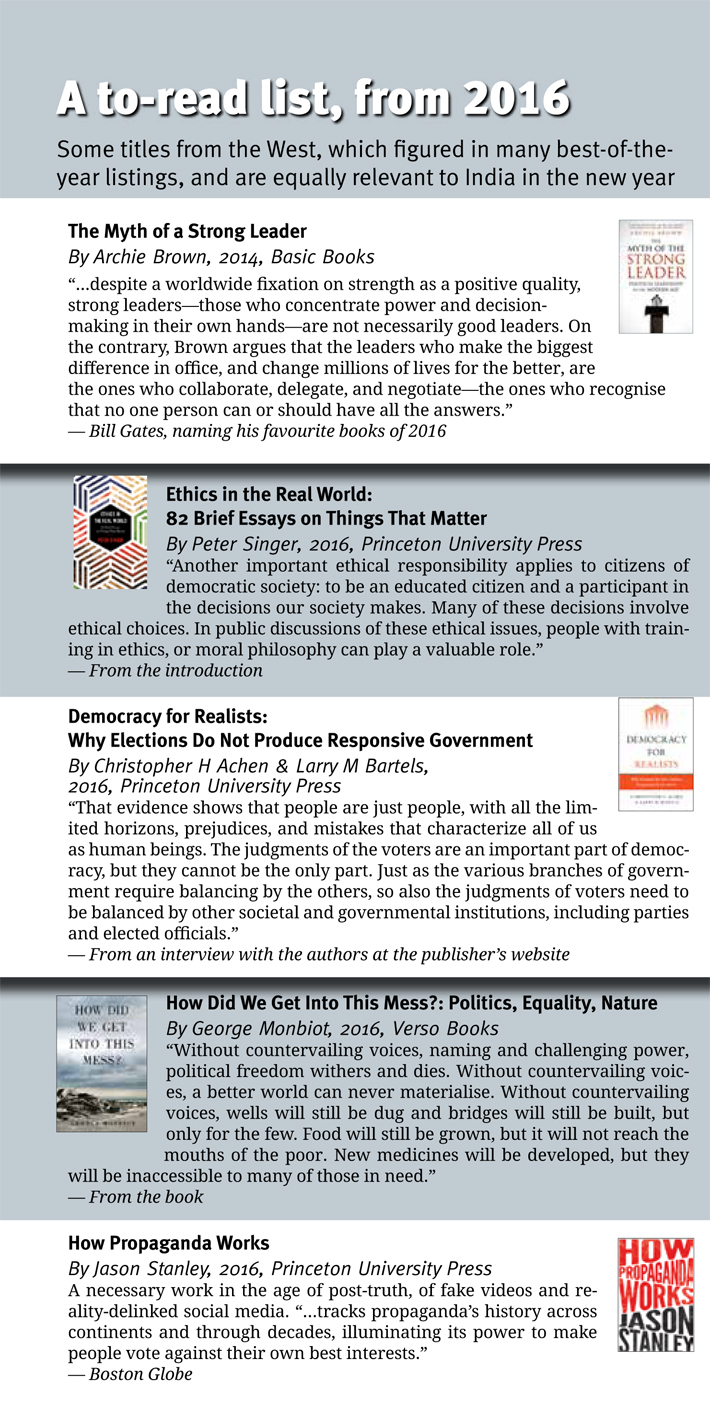 Saint Teresa of Calcutta: A Celebration of her Life & Legacy
By Raghu Rai, Aleph Book Company

Legendary photographer Raghu Rai met Mother Teresa for the first time in 1970. Over the next twenty-seven years, until her death in 1997, he photographed her, almost without pause, producing an unparalleled pictorial record of her life and work.

Indira Gandhi: Her Life and Afterlife
By Sagarika Ghose, Juggernaut

Published to mark her centenary this book takes us through Indira Gandhi’s many avatars, from Gungi Gudiya and Ma Durga to Great Dictator and Murdered Martyr; from shy daughter, doting mother and unhappy wife to determined dynast and Iron Lady of India.

Political Corruption in India: How should it be combated?
By N Ram, Aleph Book Company

The book will focus on the Indian variant of ‘grand corruption’, an idea and category that harks back to Hegel’s famous differentiation between ordinary corruption or ‘a great and general corruption’. Drawing on his experience of investigating Bofors – modern India’s defining corruption scandal – and analysing more recent investigations of grand corruption, the author throws a spotlight on what independent and public-spirited journalism can do, in tandem with other democratic institutions, to combat corruption across the land. The book ends with a forecast on whether India will be able to root out corruption from its polity in the conceivable future.

The Modi government’s sudden demonetisation of Rs 500 and Rs 1,000 notes in November 2016, besides causing untold hardship to hundreds of millions of Indians, did not do much to destroy the black economy which has crippled the country for decades now. In this book, Arun Kumar, the country’s leading authority on the problem, tells us exactly why Modi’s gambit failed. He shows us the only way in which the black economy can be rooted out, provided the ruling government has the political will and determination to achieve its objective.