A 50-year-old dream gets on track It is like a dream come true as we were disconnected from the rest of the country,” said an ecstatic Babloo Rai, a resident of Mau town in Uttar Pradesh after it was announced that a 51-km broad-gauge line between Mau station of North Eastern Railway and Tarighat terminal station of East Central Railway will become a reality in six years.

Prime minister Narendra Modi had announced budget allocation for the new railway line during his rally in Ballia, Uttar Pradesh, in March 2016.  This initiative is expected to change the socio-economic condition of the region.

The proposal for a railway link between Mau and Tarighat had been pending for more than half a century. The cabinet committee on economic affairs chaired by the PM gave its approval for the project on June 1, 2016. The new line crosses the Ganga near a road bridge for
National Highway 97 and is located almost parallel to it and joins the existing broad-gauge line between Tarighat and Dildarnagar.

This project line connects Mau with Tarighat and a rail line already exists between Tarighat and Dildarnagar which is on the Mughalsarai-Patna line. This will improve connectivity in this region and freight trains for Uttar Pradesh can by-pass Mughalsarai. This route can also serve as an alternate route in case of any emergency on the Mughalsarai main line.

“This project will help in decongesting Mughalsarai as line capacity/utilisation will increase to 175 percent by 2019 and the resulting congestion can slow down the movement,” minister of state for railways Manoj Sinha told Governance Now.

It was way back in 1962 that Vishwanath Singh Gahmari, a member of the third Lok Sabha [1962-67], had raised the issue of poverty and backwardness of the Purvanchal region of Uttar Pradesh. His plea had moved prime minister Jawaharlal Nehru to tears in parliament. The government soon formed a fact-finding panel called the Patel commission. In 1964, the Patel commission recommended that the line linked at Tarighat (Ghazipur) should be linked with the north bank of the Ganga through a bridge to provide adequate rail transport linkage. 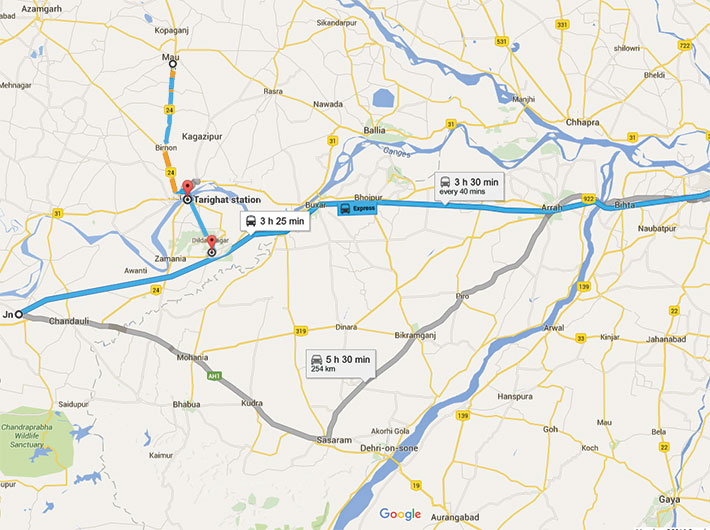 Muhammad Salim of Dildarnagar said, “Going towards Mau was a difficult task. Now it will be easier. Also, there will be more trains between Patna and Delhi.”

Anurag Parasar, another resident of Dildarnagar, concurred: “This line will put an end to the unnecessary train delays. And there will be more trains connecting Delhi and Kolkata, hence travelling to both the metros will become easier.”

Eastern UP is a backward region with per capita annual income about one-fourth of the national average. The region has long been neglected by successive central and state governments.

Social activist Rameshwar Rai, who has been working in the region for long now, said, “While the UPA government announced a special package for Bundelkhand before the 2012 assembly elections, there was no major announcement for eastern UP where most of the districts are underdeveloped and face serious challenges. Lack of proper healthcare, roads, education opportunities and poor connectivity with the rest of the country has kept this region in the dark ages.”

So, this project will not only remove transport difficulties, it will also boost economic development.

“This was the need of the hour as the area needed to be linked through rail and road for economic development. The Patel commission had recommended the railway line terminating at Tarighat to be extended to the north bank of the Ganga through a bridge but this was ignored,” said Manoj Sinha.

The estimated cost of the project is Rs 1,765.92 crore and the expected completion cost is Rs 2,109.07 crore with five percent escalation per annum.

“This will provide better transport infrastructure to the area separated by the Ganga as the existing road bridge at Ghazipur is not able to cater to the increased traffic,” said Amit Pande of Uttar Pradesh’s Ghazipur district.

The construction of Mau-Tarighat line will significantly benefit Uttar Pradesh as well as Bihar since the existing road bridge on the Ganga at Ghazipur has only two lanes. The other nearby road bridge is 50 km away at Varanasi, and other road bridges in the region, at Buxar, Patna and Mokama, do not allow heavy vehicular traffic.

Farmers too will benefit as they are not able to sell their vegetables in distant places where they can hope to get a better price for their produce. Vegetables grow in abundance in the region and it will be a blessing for farmers.