Home is where the highway is A disconsolate Shanti Devi with her family on NH-31

We are a family of 21 people and we have been residing on this bund for two years now. There is no electricity, no proper roof and no safety. I am worried for my grandchildren. I want to see a roof on their heads before I breathe my last. Can you help me?” asks Shanti Devi, a 60-year-old woman, who is currently living along National Highway 31, as flood waters gush past her present tenement in Uttar Pradesh’s Ballia district.

Shanti Devi used to live in a mud house at Athgava village, Ballia. But it was destroyed in the floods which struck in August 2014. With no place to go, she moved with her family to this national highway which is actually a bund for the river Ganga. It stands 20 feet tall and was considered to be the safest option by the flood affected.

“The water took away everything we owned. We had nowhere to go. We have been living on this road for two years now and it’s a struggle for life every day,” says Shanti Devi whose family comprises her four sons, four daughter-in-laws and 12 grandchildren.

Shanti Devi, who has a wizened face, says her thatched house is located exactly between Ghazipur, Ballia and Hajipur in Bihar. She says the area lies on the belt where the Ganga and the Saryu meet. “The water current is very strong here. Between July and October, the water comes right up to the highway. We then have to shift to the middle of the road. It creates chaos. Sometimes snakes, scorpions and even crocodiles come up. We have faced them all,” she says.

As Devi speaks, half of her attention is towards her grandchildren, some of whom scurry on this narrow stretch on which vehicles pass by, posing a danger to their lives. “You can see, there are no street lights. My heart races every time a car zips by. Once, one of my grandchildren nearly came under a bus.”

Families in Ballia have now made the highway practically their home. The 968-km long highway connects Unnao of Uttar Pradesh with Pandua in  West Bengal.

“It’s very difficult. We have this one lantern that all of us use. Electricity is another set of problems altogether, but first we want a proper roof,” she says with tear-filled eyes. 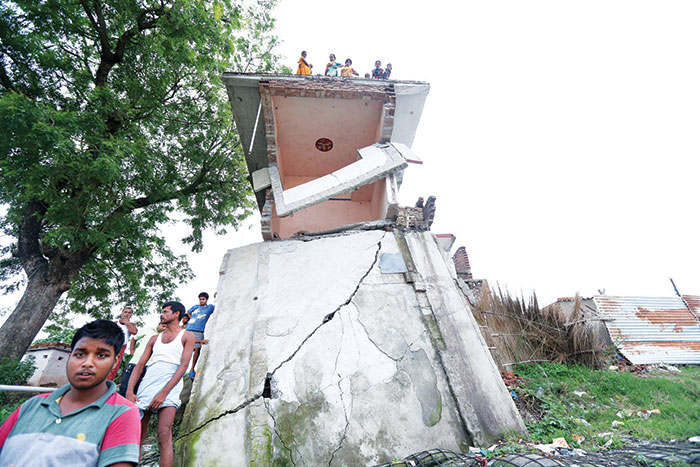 Devi’s ordeal is the story of many of those villagers whose houses crumbled and were washed away in the 2014 floods in Uttar Pradesh.
Lallan Yadav too shifted to the highway with his family comprising his aged mother, wife and seven kids. “I do farming in the nearby fields and earn Rs 50 every day. But it’s not enough to feed so many people. Ministers have come and gone. They give us a bag of rice and a handful of promises and that’s about it. We never hear from them again. We are forgotten,” he says.

Yadav says that as per the Lohiya Grameen Awas Yojana, they were promised a ‘katha’ (a traditional unit of measurement) of land and Rs 70,000. “We only got Rs 50,000 and it finished within a year. We never received the full amount. They also promised us one katha (750 sq ft) of land but we haven’t got it yet,” he says.

Lohiya Grameen Awas Yojana is a social welfare programme launched by the Akhilesh Yadav government to provide housing to the rural poor in 2013. Under the scheme, the government provides financial assistance as well as land for construction of houses.

“We haven’t complained anywhere because we don’t know where to go. There are elections next year, so different party workers have started visiting us again. Last time someone came with a bag of fruits. They all come with a temporary solution and leave. Then again we are left alone to die,” says an agitated Yadav.

While people like Shanti Devi and Lallan Yadav left their village after the floods, there are many others who are still living in danger at Jayaprakash Narayan Nagar in Sitab Diyara village in adjoining Bihar’s Saran district, which is about six kms away from NH 31. The area falls along the river banks of Ganga and Sarayu, making it a danger zone.

Popularly known as JP Nagar, the area consists of 27 communities, which are locally called ‘tolas’.
Forty-year-old Narayan Shah resides in Rameshwar Tola, which consists of 100-150 houses. A major portion of Shah’s house was damaged due to the floods. However, he continues to live there with his family.

“My house was destroyed in the 2014 floods. And since then, little by little, the river has taken away a vast portion of my land. But I am helpless. We have nowhere else to go. This area comes on the Bihar border and unlike the UP government, the Bihar government didn’t promise us any land or money,” says Shah.

He says that in 2014, floods washed away around 50-60 houses in Rameshwar Tola. The families, however, continue to live there as they were not provided with any financial aid by the government. “I have faced a loss of Rs 15 lakh. We wrote many letters to the Lekhpal (representative of the government at village level) asking for land somewhere else, but he asks for Rs 5000 in return. I don’t want to bribe him. I don’t have much money left. I also went to the district magistrate’s office in Chhapra, Bihar, but he repeatedly tells me to have patience and wait for his reply. I have been waiting for two years. How long do I have to wait?” asks a disillusioned Shah.

On how they survive during floods, Shah says, “Whenever there is a flood-like situation, we pack our bags and move further inside the village. But that’s a temporary arrangement. We are still waiting for the government to take note [of our plight].” 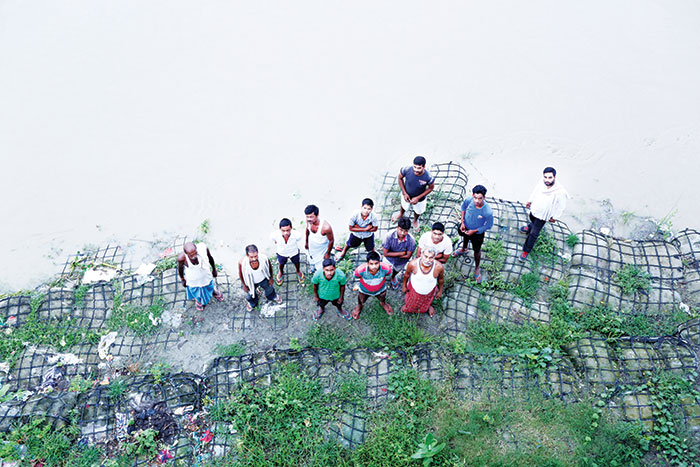 Rakesh Kumar, who was district magistrate of Ballia when we made the visit in July (he is now suspended), says that the floods are the most common natural disaster and the people of Ballia have devised many ways to cope with them. He adds that there is a need to take effective and sustained flood management measures.

“A major portion of Ballia has drowned in the Ganga. Ballia was bigger than what you see today. More than half of it has been destroyed in floods. Even today, there are no proper flood [prevention] measures which are the need of the hour,” he says.

On people’s woes, Kumar says, “We have distributed land to 377 people who were affected by floods. But I admit the number [of those in the need] is much higher than that. There is a lot of paper work.”