Provoking and sustaining separatism and terrorism is good business. Money flows from across the border, and separatist leaders enrich themselves Till the National Investigation Agency (NIA) caught up with him in Delhi on August 17, 70-year-old Zahoor Ahmad Shah Watali, a businessman, was indeed one of the most powerful persons in Kashmir valley. He was known to wield enormous clout in the corridors of power, both in Srinagar and Delhi. His influence continued despite change in regime in the state and at the centre. But in the summer of 2017, the NIA zeroed in on him as a suspected key conduit for funds given to all troublemakers in Kashmir – pro-Pakistani leaders, terrorists and stone-throwers. The investigations continue. But even before NIA sleuths swooped down upon Watali, raided 17 of his and his relatives’ properties in Jammu, Srinagar, Delhi and Gurugram, he was well-recognised as a mover and shaker in the shady world of separatists and the Inter-Services Intelligence (ISI) of Pakistan. Even in Delhi, surprisingly, bureaucrats, especially in the intelligence circles, would hear him out. 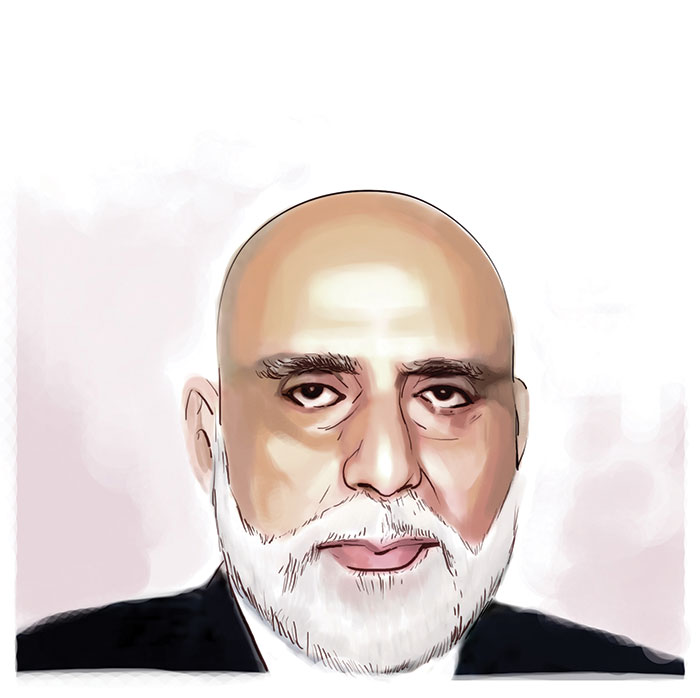 Zahoor Watali, at the centre of NIA investigations of terror funding

Looking back, Watali’s claim that the BJP government had sought his help to make Pakistan prime minister Nawaz Sharif agree to attend Narendra Modi’s swearing-in at Delhi in May 2014 does not seem like mere bluster. “He did help bridge the communication gap at that time. There were a lot of misgivings in Pakistan about Modi, and therefore, informal confirmation from Sharif was a must before we could send them a formal invite,” says a source well-versed with the matter. In Kashmir, separatists looked at him with awe, particularly after former ‘prime minister’ of PoK Sultan Mehmood Chaudhary came to Kashmir to attend the wedding of Watali’s son Yasir in September 2011. The Omar Abdullah government took this as an opportunity to generate goodwill among the Pakistanis, rolled out a red carpet for him and provided him with a chopper to have a bird’s eye view of the Valley. Chaudhary was overwhelmed and publicly thanked Watali for fulfilling his wish. Ironically, he was being hosted in the same Kashmir that his government was trying to wrest by sending terrorists and jihadis. 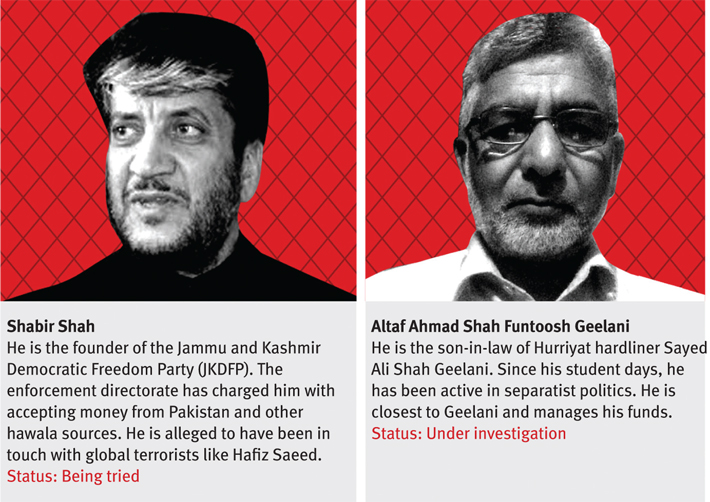 This single incident had raised Zahoor Watali’s graph by many notches; from being an obscure money operator in the jihad-terrorism game, he was now seen as someone with reach and influence in the corridors of power in Islamabad and Delhi.
Six years on, Watali is cooling his heels in a Delhi guesthouse that doubles as a lockup of the NIA. He is unable to explain to his interrogators, who are confronting him with facts about his money transactions and property documents, how he managed to acquire properties – flats, swathes of land in Jammu and Kashmir, houses in multiple locations in Kashmir, Dubai, Gurugram and London – from his known businesses. Many of these properties are benami. The NIA is scrutinising a long list of seized documents related to properties, financial transactions, bank passbooks. It’s also going through handwritten notes suspected to document money paid to Hurriyat leaders and also a number of laptops and electronic gadgets that will hopefully yield secret money trails. In the weeks to come, he could be charged with funding terrorism in Kashmir and possession of assets not matching his source of income.
Watali’s rise from a smalltime plywood merchant to one of the richest persons in Kashmir runs parallel to 28 years of jihadi terrorism, insurgency and unrest. It began around the time Pakistan trained the first batch of Jammu & Kashmir Liberation Front (JKLF) men in the use of weapons and in sabotage. Soon, thousands of Kashmiri youth began to be recruited for terror and taken across the border for training, to be sent back for carrying out attacks. Tonnes of money went into bankrolling this process. While bloodshed and mayhem was spread, the lifestyles of separatist leaders were seen changing. Many of them went on a property buying spree. Their rags-to-riches stories are a primer on the economics of jihad. 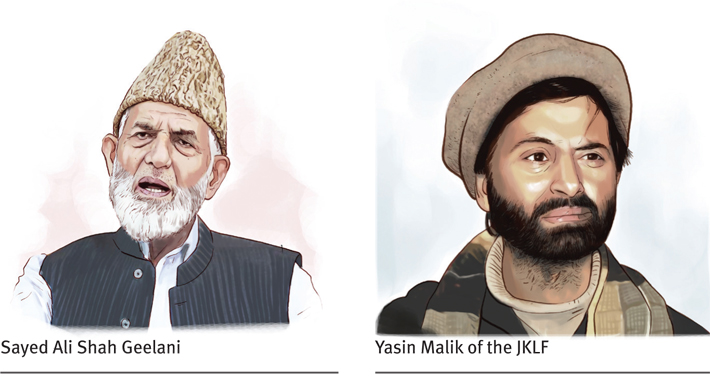 Watali rising
Among those stories, Watali’s is the most dramatic: he started out from Handwara, a small town in north Kashmir, ensconced in pine and deodar forests. His father Ghulam Nabi Watali had shifted from Srinagar in search of a better livelihood six decades ago. Watali senior had ventured into a small business. He sent one son, Ali Mohammad, to attend the local government school, and later the boy joined the police and rose to the rank of deputy inspector general. The younger lad was Zahoor, didn’t go to school. Townsfolk in Handwara remember Zahoor as a business-minded, adventurous and ambitious young man, who once drove taxi for a living.
At some later point, he had started a small timber trade. Timber, like insurgency, is a shady business in Kashmir; it thrives on the symbiotic relationship between corrupt officials of the police and forests with the unscrupulous merchants. The traders cut more trees than they are permitted to and transport them to towns and cities for sale without being questioned at the forest checkposts. Watali’s timber business was also not so clean, allege many of his acquaintances from Handwara.
Besides looking after his business, Watali was a regular hanger-on in the ‘durbar’ of the local politician, Abdul Ghani Lone. He would even help him financially. Though Watali wasn’t a member of Lone’s political outfit – the People’s Conference – he was quite close to him. At the onset of insurgency in Kashmir in the early 1990s, when politicians were fleeing the scene to escape bullets of the Pakistan-trained terrorists, a set of oligarchs – leaders of ragtag groups and smaller parties along with terrorists – turned de facto rulers of Kashmir. The Hurriyat thus came into being on the diktat of Pakistan; it comprised some 50 groups and political organisations like the People’s Conference and acted as the political facade of terrorists. Being one of the brightest politicians from the Valley, Lone was a key person in Pakistan’s scheme of things. However, his hubris didn’t make him an ideal partner for the ISI mandarins. Lone’s dilemma was that he was in league with the pro-Pakistanis but some of them were plotting against him. Lone was scared and felt insecure and it’s then Zahoor Watali, a tall man with a robust physique and an alert mind, was assigned a new role in his office. “He was like Lone’s shadow and everyone had to pass through him before meeting Lone Sahib,” a source said.

Today, Lone’s children are in different camps of the fragmented Kashmiri society: Sajjad Lone is a minister in the PDP-BJP cabinet, Bilal Lone is a member of the Hurriyat and daughter Shabnam Lone, a regular in acerbic primetime television debates, is a supreme court advocate. They speak dismissively of Watali as one of the hundreds of their father’s hangers-on. “Those days there were hundreds of such people and everyone found their own way up (to connect with the financer ISI); nobody needed to tell anyone how to curry favour with the ISI,” Shabnam Lone told Governance Now when asked about Watali’s link with their father. However, sources close to the family say Watali had distanced himself from the family of his mentor after the latter was killed in May 2002. Lone had finished speaking at a pro-freedom rally in Srinagar, when a gunman pumped bullets in his body, killing him on the spot in front of other leaders. The killer escaped by mingling in the crowd.
After speaking to various people who have known him, one can safely say that Lone had introduced his protege to the ISI. However, being a deft businessman, Watali took the terror-jihad sponsored by Pakistan as a business opportunity and made the most of it.
ISI’s favourite teller
Governance Now spoke to a senior Hurriyat leader to understand how Watali had emerged as a crucial link between the financers of Kashmir’s insurgency-cum-jihad and those who were getting richer on this. He spoke on the sole condition that his name and antecedents would not be disclosed. The front-rung leader of the All-Parties Hurriyat Conference (APHC) admitted that he had received a monthly allowance from Pakistan for five years. “I was getting about Rs 8-10 lakh per month. The money would come from the ISI and was delivered to me in cash by Zahoor,” he said. Watali, he alleged, deducted his 20 percent commission and handed over the rest to him with utmost punctuality. “I have no idea if he was supposed to take the 20 percent or not,” he said. This continued for five years until one day he was called by the ISI to Rawalpindi, the headquarters of the Pakistan army. He claims as soon as he arrived for the meeting, he could sense the tension around. “I asked them why we, the political leaders, were being contacted through a middleman.” He refused to disclose details of his interaction for obvious reasons but said the meeting ended on an unpleasant note. “They treat us like their servants.” After the meeting, he realised that his privy purse had been stopped by the ISI.