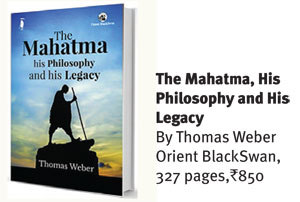 There has been a great resurgence of Gandhism in the last couple of decades – at least in some parts of society. In the new century, there have been at least four well-received popular movies featuring Gandhi or Gandhism substantially. There have been at least as many blockbuster and widely read biographies. This interest in Gandhi will only increase as the nation prepares for the Mahatma’s 150th birth anniversary celebrations later next year. Once can surmise that more and more people, especially youth, are turning to Gandhi for help in navigating our baffling times. For a Gandhian, this should be good news.

Thomas Weber, one of the pre-eminent Gandhi interpreters in our times, has a more nuanced view. In his latest publication, in Orient BlackSwan’s acclaimed Gandhi Studies series, he says, “Perhaps Gandhi has taken on a new career, but it is a different one to the one I first encountered in India [in 1975].” Thus, “one could say that Gandhian activism, once the main occupation of the Gandhian community, seems to have been replaced by an academic interest in Gandhi.”

In other words, “there is a trend to giving us a less activist and more bureaucratic Gandhi. … Once, committed Gandhi disciples dedicated their lives to service. This is fairly typical in newly-formed organisations. After the passing of the leader, the organisations tend to become bureaucratic and sources of employment. This is a fairly well-established general trend. Given that Gandhism faces new realities, can it be fostered so that there is still a viable and meaningful Gandhi establishment in India?”

In this essay, ‘Gandhi Today: In the Field and in the Academy – An Outsider’s Observations’ (originally published in Gandhi Marg in 2012), Weber with an amiable tone gives a nearly comprehensive list of all that has gone wrong – or changed – with Gandhi’s afterlife in post-liberalisation India. He has several suggestions to offer, for consolidating the ever-expanding but rarely deepening field of Gandhi research and scholarship. Among them is pulling together the Gandhi archive, currently spread over different archives, and consolidating the material at a central hub which would have a Gandhian ambience. The Sabarmati Ashram in Ahmedabad took several initiatives in that direction in recent years including the launch of the Gandhi Heritage Portal and a resident fellowship programme.

The book under review, a collection of essays published in various journals – mostly the venerable Gandhi Marg, has three sections: the life and times of Gandhi, his philosophy, and his legacy. For Gandhi scholars, there are rare gems here. ‘Why Gandhi Didn’t Go to Finland (or America or China)’, for example, is a little-known but highly valuable case study “providing us with further insight into his thinking, into what was important for him”.

The same holds for the essay on Gandhi and Martin Luther King, Jr (50th anniversary of whose assassination was observed on April 4) or the essay on Gandhi and Gene Sharp (who died in January this year) – especially the latter, as it provides a more nuanced reading of Sharp’s nonviolent tactics which have been credited for the Arab Spring and other popular ‘revolutions’ of recent times.

The Mahatma, His Philosophy and His Legacy is not one of those ambitious grand works that evoke epithets like magisterial, but it humbly serves a serious student of Gandhi better than most of them.