NeGP: What change in funding implies for the key e-gov initiative

Centre will stop funding states for implementing the ambitious e-gov initiative. That will hurt the weaker states and affect its flagship Digital India campaign too

The budget 2015-16 has excluded from the list of centre-sponsored schemes eight programmes, including the national e-governance plan (NeGP), being overseen by the department of electronics and information technology (DeitY).

The withdrawal of funding support for the NeGP, UPA government’s flagship initiative for e-governance with a total proposed allocation of Rs 46,000 crore, is likely to widen the gap between the better performing and lagging states in e-governance. While it is not logical for the centre to continue funding to the states for an indefinite period, it will make e-governance messier, given the lack of technical capacity within the government machinery at the state level.

States will now spend from their own pockets to keep core infrastructure projects under the plan running. It may also stir up the issue of standardisation and interoperability among states and union territories (UTs), as the centre will have little say in state IT projects. Lack of interoperability will hamper the electronic sharing of information among states, adversely impacting the vision for a Digital India. 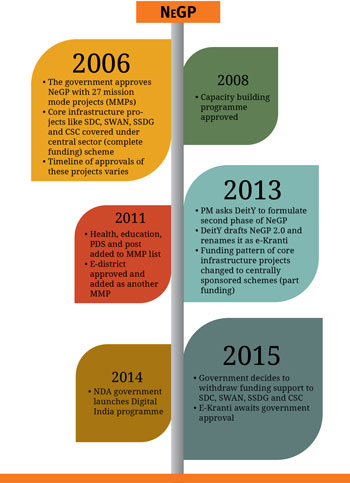 The centre’s withdrawal of funding comes close on the heels of the report of the 14th finance commission, which provided for devolution of 44 percent of gross tax revenue to states, up from 32 percent.

Going by the government’s logic, since the states will have more money in their kitty, they should themselves plan the fate of these programmes and not the central government.

Jaijit Bhattacharya, partner, infrastructure and government services, KPMG, said this is the right time to delegate ownership to states, as they have matured in e-governance over the years. He, however, conceded that issues such as standardisation – a set of common software protocols which helps in the seamless sharing of information between different computer systems – will be completely ignored.

“It took 12 years for DeitY to set over 40 standards for software used in the government. It is still not a priority. With the advent of Internet of Things and the delinking of funding support, the situation will only worsen,” Bhattacharya said.

Tanmoy Chakrabarti, vice-president, government industry solutions unit, TCS, said the delinking would cut red tape and lengthier file movements, and process of approvals. But, he added, the wedge between the progressive and laggard states will only grow.

Arindam Guha, senior director, Deloitte Touche Tohmatsu (India), said given the lack of capacity in some states in contract and project management, the centre should continue to help them with empanelment of efficient vendors and standard RFP templates which would help them in choosing the right technology partner.


An industry expert said the government must not leave execution of Digital India and other e-governance initiatives to the communications and IT ministry. “We have seen the case of NeGP. Since Digital India spans across several line ministries and departments, the prime minister’s office (PMO) must form an inter-ministerial group for its effective implementation.”

Some of the projects were covered under the central sector scheme and centre-sponsored schemes. The central sector schemes are those which come exclusively under the centre’s domain. Normally the centre provides complete funding for sector projects. The sponsored schemes are meant by and large for state subjects or the subjects falling in the concurrent list. The centre partially funds the project. Here the centre transfers its share of funding to the state’s treasury, unlike in the sector scheme where it is directly given to the implementing agency.

After nine years of continuous financial support from the centre, states will now have to fund infrastructure projects on its own. When the NeGP was approved these core projects – SDC, SWAN, CSCs, and SSDG – were completely sponsored by DeitY. In 2013, the government converted these schemes into centrally sponsored ones. Now the states are on their own.

In the case of MMPs, the final call on funding will continue to be taken by the respective central ministries. In most likelihood, said a DeitY official, the central ministries and departments are going to reduce their financial support for MMPs falling under the concurrent and state lists. All of these MMPs have been included in the next phase of NeGP, called e-Kranti. The new government, however, is yet to approve the next phase.

According to DeitY secretary  RS Sharma, “The central sector schemes in e-governance, including national service delivery gateway, would continue to be funded by the centre.”

It is interesting to note that while digital infrastructure is operational in many states, there are still about 10 to 12 states and UTs that have lagged in execution. SDC and SSDG are operational only in 23 of the 36 states and UTs (see box).

E-district was another major project covered under the centrally sponsored scheme and it may also be handed over to the states for implementation. It aims to eliminate human interface in the delivery of certificates and licences. This project is operational in  only 312 out of the 640 districts. The project was expected to be completed in all districts by the end of 2016.

Sharma said funds for the MMPs covered under the next phase of NeGP will come from the respective department of the central or state governments. So will be the funding pattern under Digital India, the umbrella

programme that may include the next phase of NeGP. The DeitY secretary said , “The central ministries  and departments and state governments would have the overall  responsibility for implementation of various MMPs and other projects  under Digital India.


Everything you need to know about NeGP

States/UTs where SDC is still not operational

States/UTs where SSDG is still not operational