Time for a water law Fifty-two-year-old Shanti Devi from Sarkhadi village in Uttar Pradesh’s Bundelkhand region walks 12 km every day to fill two earthen pots with water, that lasts for two days. Then she fetches water from a private bore-well after standing in a queue for four hours. “Almost all the hand-pumps [in our village] have dried up in the last two years. There is no water even in the river and ponds,” she says.

Her husband Nand Kishore had to move to nearby Lalitpur district with their four sons as it was difficult to do farming without enough irrigation. Their two daughters, like many others in the village, have not been going to school regularly – they spend most of their time searching for sources of water, and the school itself has not enough water.

Her head covered with saree, Shanti unwraps chapatis she had cooked last night for the journey to Delhi – her first visit – as she talks about the miseries she and other fellow villagers undergo to meet their water requirement. And she has promised her daughters that this visit would solve all their problems. Hopes are high for almost 5,000 villagers of drought-hit regions of Maharashtra, Madhya Pradesh, Uttar Pradesh, Rajasthan, Karnataka and Bihar, who have turned into fiery water activists and gathered at Delhi’s Rajghat to march towards Jantar Mantar on May 5.

Though they have come from different regions, they all are facing the same travails. For them a drop of water wasted in one part of the country could have been of use to someone else who awaits their turn at a public tap which might go dry soon. This has led them to initiate their fight demanding a strict water law.

They have been mobilised by water conservationist Rajendra Singh, also called ‘water man of India’, to join the Jal Satyagraha under Jal Jan Jodo Abhiyan. A similar rally was carried out on May 1 in Latur of Maharashtra’s Marathwada region that has been suffering acutely from water scarcity.

Sufferings
Unsure of whether the Jal Satyagraha would manage to create a wave in the national capital or will simply be a wash-out, 47-year-old Parmanand Adivasi from Madhya Pradesh’s Gunera village in Bundelkhand region is unhappy with the way the government has tackled drought in his village. “We haven’t received rainfall for the past three years. The administration sends a water tanker whenever the water table goes down. But we need a permanent solution. Bundelkhand was always deprived of water even in ancient times. But there were solutions even then. You can figure out how sincere the government is from the fact that out of 22 check-dams it built in the last four years, none are functional. A few check-dams washed away in less than a month after construction,” Parmanand says.

Dina of Biharipura village from Tikamgarh district, Madhya Pradesh, is upset because he says the government has no desire to conserve water. “Tikamgarh once had 1,000 ponds, out of which only 400 survive today – the rest dried up over the years. If the government had made efforts to work on the maintenance of the ponds and framed laws against encroachment on them, many more ponds would have survived and served as reservoirs for us today.”

“We need a right to water,” says a demure Angoori from Nanded, Maharashtra, as she describes the difficulties she has to face to fetch water from the only water tap near her village. “There are agents near the bore-well. If you give '20 extra, you get water easily and if you don’t, you might have to wait 20-22 hours for your turn,” she says.

Dhaniya’s anguish is nearly unbearable. She speaks of the time last year when she would pillion-ride on her husband’s bicycle every day and travel 22 km to Jhansi to fetch water – all this when she was pregnant.

As the Jal Satyagraha rally is yet to begin, they are not going to waste the opportunity, and a few of them take bath under a tap at the Rajghat bus parking lot and fill their water bottles. They are surprised how easily water is available here, and a contented smile spreads across their faces.

This is what they have come for. To demand a right to water. To demand a law that ensures optimum use of water and restricts its wastage/misuse. 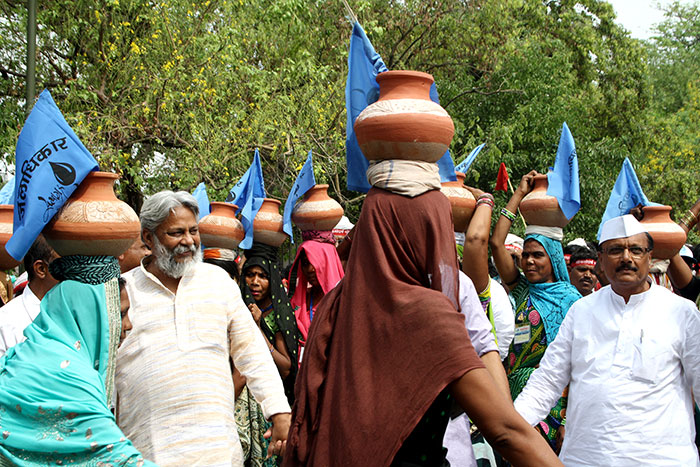 Need for a law
The Jal Jan Jodo Abhiyan is a campaign that advocates people’s involvement in water conservation. Under this campaign, Singh and fellow activists have sought a law to ensure water security across the country. Members have prepared a draft of the proposed ‘River Conservation Bill’. It aims to conserve and rejuvenate water bodies throughout the country and calls for framing rules and regulations for optimum use of water.

The work on the bill has been underway since 2001. It was drafted completely in the run-up to the last Lok Sabha polls. Activists were hoping that it would get picked up by political parties as a major issue.

More than 2,000 organisations and 10,000 volunteers have formed Jal Jan Jodo Abhiyan to draft the bill. River scientists, academicians, lawyers and several universities and institutions are part of the draft team.

Satellite mapping of all natural water bodies, including small streams and ponds at state, district and village levels and updating the information yearly.

Any misuse of water or land grabbing activity should be checked.

Provisions to check discharge of industrial waste and sewerage into ponds, lakes, rivers and other natural water bodies.

Ensuring safe drinking water for all.

Checking the conversion of agricultural land and riverbeds for commercial use and also controlling garbage dumping in riverbeds, ponds and wells.

Setting a limit on the use of underground water and retrieval of the same involving communities.

No permission should be given for extraction of underground water for industrial purposes.

This, they suggest, can start with surveying and demarcating all water reservoirs and water bodies including those grabbed by land mafias and real-estate developers. Another provision is to make wastage of water a criminal offence. The bill also calls for rain water harvesting rules to be followed every year before the monsoon.

“There is no law for water in our country. Our demand is simple. Frame a law for optimum use of water, conservation of rivers and underground water and provide safe drinking water for all,” says Singh.

The Magsaysay Award winner, who is currently working in the drought-hit areas of Maharashtra, says, “A major reason for water scarcity in our country is the misuse of water. The government should frame laws to check misuse and wastage of water along with recharging water bodies.”

“There is no system to check wastage, misuse and distribution of water. Over the years, two sections of people have emerged, one who doesn’t get safe drinking water and the other who misuses water from private bore-wells and other sources. Nobody thinks of saving water. This has to be checked by introducing a water security law so that every drop of water is used judiciously.”

Rajesh Pandit, a water activist from Nashik, says, “If people are involved, they will realise the importance of water at the source level [aquifers] and not just the water running from the water tap. In Delhi, the Yamuna is dying because there is no ownership. People don’t feel connected with the river. The same is true for all rivers and water bodies.”

In many drought-hit villages, people have come together as a community to resolve water scarcity. Geetanjali Bala, coordinator, Parmarth Seva Samiti, which works for water conservation in Bundelkhand, says they have introduced ‘Pani Panchayat’ in Jhansi and Lalitpur. “Women in small groups discuss the water issues, especially contamination and misuse of public tap and bore-wells. They figure out the problems and discuss a sustainable solution,” she says.