Tamil Nadu, one of India’s largest states and home to about 67 million people, is facing a severe drought, forcing many farmers to commit suicide as their crop withers.

The state’s agony has been highlighted in the national capital where a group of farmers carried human skulls to draw attention to the unfolding crisis.


Government effort
Tamil Nadu is facing water deficit this summer, says K Phanindra Reddy, principal secretary, municipal administration and water supply department, Tamil Nadu, as he talks about how the authorities are planning to meet water requirements.
There is a 42 percent shortage in rainfall over the last two monsoons. Adding to the problems is the fact that Cauvery water and Krishna water has also declined, says Reddy. As a result the storage of water in the reservoirs and dams has hit a historic low.
Tamil Nadu has invested heavily in water supply schemes in the past decade. Chronically water-starved districts like Dharmapuri, Krishnagiri, Vellore, Ramanathapuram, Virudunagar and others are covered with combined water supply schemes with Cauvery as the source. This is helping in reasonably ensuring water supply even though these schemes are running at 70 percent of their capacity.
In order to tide over the shortage, the local bodies with the financial assistance from the state government have taken up many drought mitigation works such as creation of bore-wells, water recharge wells, mini power pumps and extension of lorry water supply. “We hope to tide over the present crisis,” Reddy adds.


After floods, Chennai swings to the other extreme
Just two years after a massive flood ravaged Chennai, the locals are now facing a hard time in the absence of adequate water supply.
Kasipuram block in Kasimedu locality of Chennai has hand pumps installed at every 50 metres, but all are running dry. “For the past five months we are facing water shortage and now the situation is such that we are not getting even a drop of water in the pumps,” grumbles 35-year-old Kalai. In frustration she again tries pumping water, but to no avail.
“We are dependent on a tanker which comes once in two days. The residents have complained at the water office but no concrete action has been taken in this regard,” says 40-year-old Senthil.
While Kalai and Senthil are sharing their woes, Vaidehi, 22, runs towards a blue plastic drum that is used to store water. She shows an empty drum. More such empty drums are placed in the narrow street of Kasipuram block A. The empty drums tell the same tale, ‘no water’.
Kutty, 25, is worried about how long these tankers would be able to meet the requirements of the people.
Not far from Kasimedu is Tondaiarpet locality. Here the residents are getting sewage water in the taps. After repeated complaints, they are getting water tankers now.
Every alternate day at 4 in the evening, women of New Amaranjipuram street in Tondiarpet are seen rushing to the tanker with the buckets. “This year the situation is very bad compared to the previous year,” says Joan Fransz, 47.
Lydia, 51, a resident of Vinayakapuram street, says, “We have water connection at home, but we are forced to buy water from outside as this summer we are hardly getting any water in the taps. Moreover, ground water is very saline.”
Nirmal Kumar, 47, is staying in the locality since 1998. He feels that the situation is grim this summer. “Don’t know how we are going to manage this summer. We are eight members in the family, so water consumption is high. Corporation water supply is irregular. So we are forced to buy water from outside.” 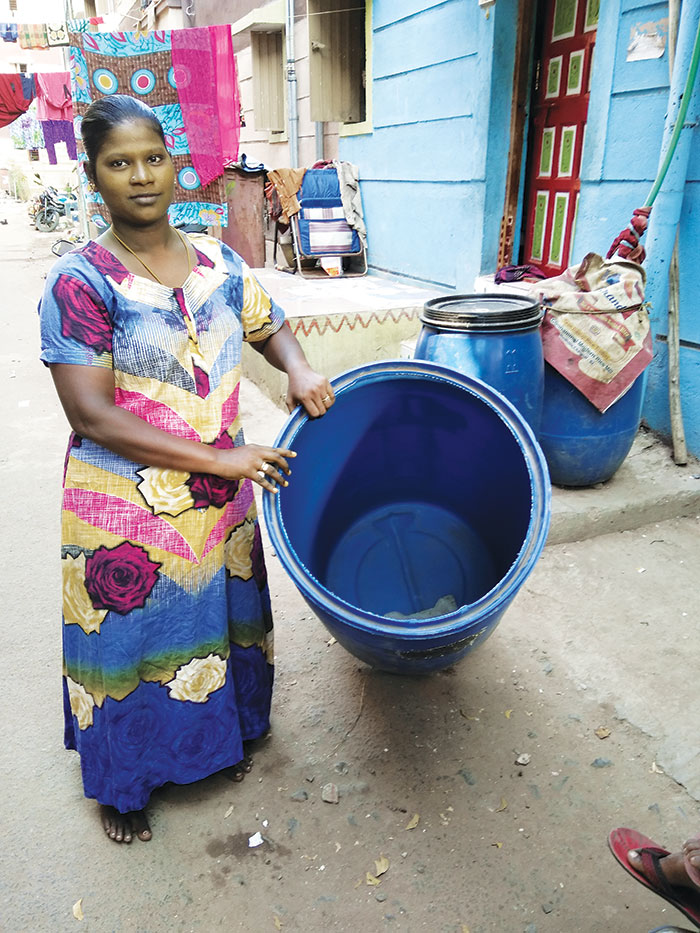 Valli, 35, Umavathi, 40, and Manju, 25 of YMCA Kuppam street too voiced their grievance.
Amir Basha, 59, of Kutty street in Royapuram locality says that water tanker comes on alternate days. Every household gets three buckets of water for '2.
Asked what is being done to meet the immediate requirement, the Chennai metropolitan water supply and sewerage board says the demand of water supply in Kasimedu and Tondaiarpet area is about 9 million liters per day (MLD) and water is being supplied through pipeline in these areas.
The other parts of the city too are facing a water shortage.
Officials admit that the combined storage in the four reservoirs providing water to the Chennai city was below 15 percent in the first week of March itself.
Wetlands such as Pallikaranai are going dry with the onset of summer. Authorities say they are supplying 500-550 MLD. But, there is water leakage and theft.
Adding to the woes is illegal groundwater extraction leading to further depletion of the water table.
Reddy says as far as Chennai is concerned, there are two desalination plants providing about 190 MLD. The government has also contracted agricultural wells to draw about 100 MLD. “We are drawing about 60 million litres through the Veeranam pipeline from the wells in Neyveli area and Paravanar river. We have identified potential to draw 3,000 million litres from 22 abandoned quarries located south of Chennai,” says Reddy.
The situation was very comfortable last year due to the spillover effect of the December 2015 floods.
On illegal extraction of groundwater, he says, “Given the extremely difficult situation for all sections of the population, we will be taking action in glaring cases of commercial exploitation.”
shivani@governancenow.com
(The story appears in the April 16-30, 2017 issue of Governance Now)