Urban local bodies need to improve the collection efficiencies of their own revenues like property tax, says Janaagraha We now know why people are not getting a good quality of life in cities. Janaagraha Centre for Citizenship and Democracy analysed the financial management of urban local bodies (ULB) and presented key insights on the state of municipal finances based on the audit reports of the CAG on their audits of ULBs in 21 states.

The brief is a precursor to the Annual Survey of India’s City-Systems (ASICS) that evaluates the quality of city systems in India across 18 states and analyses the financial management of Urban Local Bodies.
Urban planning & design, urban capacities & resources, empowered political leadership and transparency, accountability & public participation are the four city-system components covered under ASICS. The ability of Urban Local Bodies (ULBs) to invest adequately in providing infrastructure and services to its citizens is one of the key diagnostic parameters assessed by ASICS, said Janaagraha
Here are the highlights:
Insight 1: Own revenues on average contribute to less than 37% of the total receipts of ULBs, ranging from a low of 5% in Manipur to a high of 74% in Punjab; only 3 states record > 50% share of own revenues.
Impact: Total receipts Proportion of own revenues to total receipts (%) ULBs depend on State and Central grants to a significant extent, constraining their ability to make capital investments to improve infrastructure services and other investments to improve their functioning.
Recommendation: • ULBs need to improve collection efficiencies of own revenues, mainly, property tax, advertising tax and parking fees. • Buoyant sources of revenues such as stamp duties and entertainment taxes should be devolved to ULBs. • States needs to embark on systematic fiscal decentralization 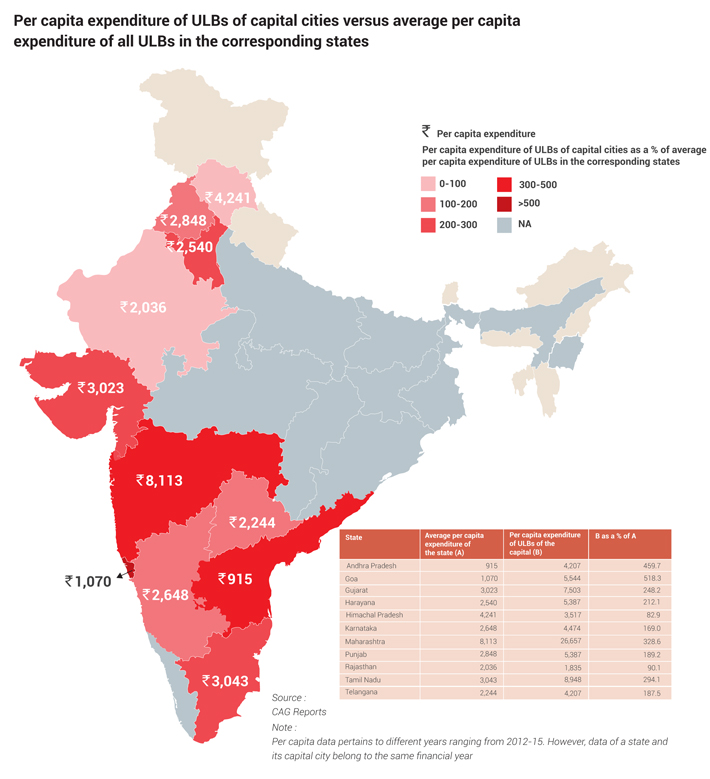 Insight 3 Significant delay in preparation of Accounts and Audit of ULBs across states, inability to ascertain accurate financial position and performance of ULBs
Impact: Constraining the ability of state governments to hold ULBs accountable and of ULBs themselves to take informed decisions or raise funds from the capital markets.
Recommendation: To clear the pendency in accounts and audit, States should actively consider empanelling Chartered Accountants. Karnataka, Bihar, Chhattisgarh, Gujarat, Odisha and Rajasthan are among the states that have empanelled Chartered Accountants to clear the backlog in audit and accounts.

Insight 5: Significant backlog in CAG audits of local bodies undermining quality of TG&S by CAG
Impact: CAG audits are the last line of defence around internal controls in ULBs. Delays in CAG audit reflects lackadaisical approach to the audit process.
Recommendation: Fix accountability for submission of financial records of ULBs on time to CAG; make transparent time table of CAG audits and reasons for delays in CAG audits.