You need Rs 5 more than we do, NREGA workers tell Modi Hundreds of workers in Manika block of Jharkhand’s Latehar district have sent Rs 5 to prime minister Narendra Modi, on Sunday. They were protesting against the measly increase of NREGA wages in Jharkhand this year – from Rs 162 per day to Rs 167 per day.

NREGA wages in Jharkhand were raised by just Rs 4 last year (from Rs 158 to 162), and another Rs 5 this year. To protest against this stinginess, workers marched through Manika, held a rally, and then hundreds of them sent Rs 5 to the prime minister with a letter.
Text of the letter
Dear prime minister,
This year your government has increased the wages of NREGA workers in Jharkhand by five rupees (from Rs 162 per day to Rs 167 per day). We feel very lucky, because in 17 states the increase was even less. It sounds like NREGA workers in Odisha are now considered very well-off because their wages have not increased at all.
Actually, we are very concerned. The government must be really short of money if it is unable to raise NREGA wages to the minimum wage, that too when one third of the rural population is affected by drought. (For your kind information, the minimum wage in Jharkhand is Rs 212 per day.)
We feel that you need the extra five rupees more than we do, since your government has so many expenses. To implement the recommendations of the Seventh Pay Commission, you will have to spend an additional Rs 1 lakh crore at least on salaries and pensions of government employees. Defence expenditure is about Rs 2.5 lakh crore. You must also be spending a lot of money on tax concessions for big companies, aside from giving them cheap land and other resources.
Considering all this, we NREGA workers have made a collective decision to give up our extra wages for a day and return the extra five rupees to you. We hope that this will help you to keep your corporate friends and government employees happy.
Your faithful workers,
[followed by name, signature and job card number] 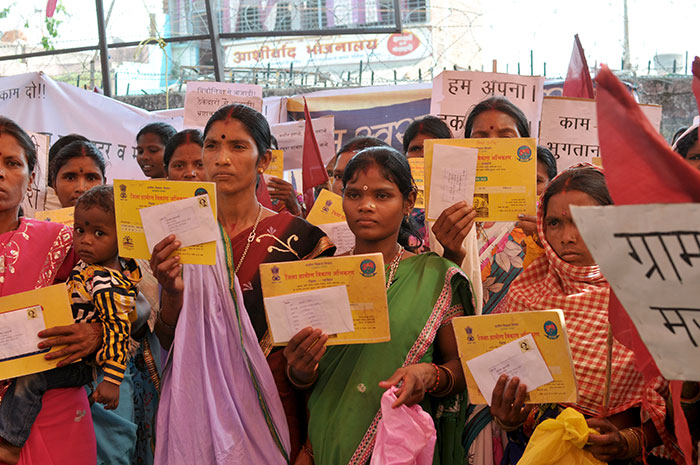 This action was initiated by Grameen Swaraj Mazdoor Sangh – a local organisation of rural workers,  local activists James Herenj and Ankita said in a press release. Among other activities, members of the Sangh are struggling to secure their rights under NREGA, including employment on demand and payment within 15 days, the press release stated. However, interest in NREGA work is waning in the area because of low wages.