For no-nonsense, time-tested tips, nothing beats this ancient Roman pamphlet In book publishing, one of the trends for the past couple of decades has been to pick out pearls of wisdom from well known sources – philosophers, sages, novelists, economists – and package them as easy reads. Thus, we have ‘How Proust Can Change Your Life’ as well as ‘How Adam Smith Can Change Your Life’. In a series called ‘Ancient Wisdom for Modern Readers’, Princeton University Press has hit the sweet spot between two options, presenting classics in the original and introducing the same to the uninitiated. One of the titles in the series, published in 2012, can be life-changing for some of us today. It is called ‘How to Win an Election: An Ancient Guide for Modern Politicians’, by Quintus Tullius Cicero, translated and introduced by Philip Freeman.
Cicero is a name that sounds familiar as an ancient philosopher. Only on checking it online does one realise that there are two of them. The more famous one, with a couple of books in Penguin Modern Classics, is the elder brother, Marcus Tullius Cicero, who is reckoned the greatest politician of ancient Rome. He was also a lawyer and a philosopher. The lesser known one, usually referred to with full name, is Quintus Tullius Cicero, a statesman and military leader.
It so happened that in year 64 BCE, Cicero Senior was contesting the election for the post of the consul – the highest office in Rome, the one who governed the vast republic. Cicero’s prospects were dicey, because he was an outsider for the capital, and their father, a wealthy landowner, was not an aristocrat. “At this point the more practical Quintus decided that his elder brother needed some advice,” writes Philip Freeman in his introduction.
“As the campaign for consul was beginning, Quintus wrote a short pamphlet to Marcus on electioneering in the form of a letter. The result is a little-known text that has somehow survived the centuries, called in Latin the ‘Commentariolum Petitionis’.” That is this book, in translation.
The short tract is marked by unapologetic realism, not idealism, in the spirit of Chanakya’s ‘Arthashastra’ (which had been written earlier) and Machiavelli’s
‘Prince’ (much later). Pragmatism over principles, manipulation over morality. Sample this: “There are three things that will guarantee votes in an election: favors, hope, and personal attachment.” Also, “Politics is full of deceit, treachery, and betrayal.”
Here are some of the top ten tips, as compiled by Freeman in the introduction:
Promise everything to everybody.
Cicero Jr wants you to promise everything to everyone, unless there is pressing reason in some specific case. He recalls a politician named Cotta, “that master of campaigning”, who did exactly that without worrying about how to keep the promises. He then fulfilled some of the pledges – the ones that benefited him. “After all, if a politician made only promises he was sure he could keep, he wouldn’t have many friends.” It would help to remain avoid specifics, like numbers. “Stick to vague generalities.”
Also, the situation would be different five years later. Nobody today bothers to check manifestos from 2014. “Events are always happening that you didn’t expect or not happening that you did expect. Broken promises are often lost in a cloud of changing circumstances so that anger against you will be minimal.”
Communication skills are key.
Cicero Sr is considered the greatest orator of Rome in those days. The younger brother wants him to take advantage of his skills in this area and win people’s trust with impressive speeches. “Since you are such an excellent communicator and your reputation has been built on this fact, you should approach every speaking engagement as if your entire future depended on that single event.” 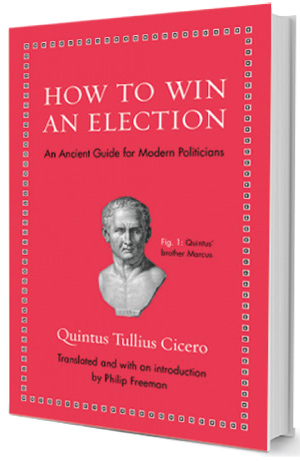 By extension, blowing one’s own trumpet is too important to shy away from. In fact, “You must always think about publicity. I’ve been talking about this throughout my whole letter, but it is vital that you use all of your assets to spread the word about your campaign to the widest possible audience.”
Know the weaknesses of your opponents – and exploit them.
Dirty tricks in elections have a long, global history. Cicero Jr’s advice: “Winning candidates do their best to distract voters from any positive aspects of their opponents possess by emphasizing the negatives. Rumors of corruption are prime fodder. Sexual scandals are even better.”

Flatter voters shamelessly.
Even gods love to be flattered, what to say of the mortals? “You desperately need to learn the art of flattery – a disgraceful thing in normal life but essential when you are running for office. … For a candidate must be a chameleon, adapting to each person he meets, changing his expression and speech as necessary.” It would help if you have a good memory, because “nothing impresses an average voter more than having a candidate remember him, so work every day to recall names and faces.”

Give people hope.
Hope, the thing with feathers, one of the better four-letter words, is also an essential ingredient for the election campaign. “The most important part of your campaign is to bring hope to people and a feeling of goodwill toward you.”
It would need a follow-up, though. “As for those who you have inspired with hope – a zealous and devoted group – you must make them believe that you will always be there to help them.”
As you can see, though it was written 2,000 years ago, reading it today you get a feeling of what Yogi Berra called “Déjà vu all over again”. Today, it is more an explainer of the political history so far than any advice for future. There should be nothing new in it for veterans, who either intuitively know these truths or learn them from experience.
For the rest, however, this is a solid primer. The no-nonsense instructions will come handy to the hundreds of non-veteran candidates and their strategists (not to mention the growing tribe of political commentators). You can keep a copy of this elegantly produced little book in the pocket of your khadi jacket and browse it between one election speech and the next. You will have better chances of winning. After all, the first reader of this tract, Cicero, went on to win in spite of the handicaps.
As a post-script, let us add that in case you are elected, you should consider switching to Cicero Senior’s “How to Run a Country”. There is also advice for those on the other side, the voters, from the notorious pragmatist Machiavelli, ‘How to Choose a Leader’
ashishm@governancenow.com