The Indian government has audaciously put the demonetisation show on the road, though with little consideration of infrastructural, banking and connectivity back-up. After making his own set of political calculations, the prime minister has quite shrewdly tried to steer the public perception on the initiative away from black money to a cashless economy. As things stand, around Rs 11 lakh crore of the Rs 14.18 lakh crore demonetised currency has returned to the system. That is around 80 percent of the money whose status as legal tender has been withdrawn. With about a fortnight to go till the end of December, experts are predicting that over 90 to 95 percent of the money will return to the banks. If it does, the one-time windfall gain that the government was hoping to receive from the RBI will go up in smoke.

Let us, for a moment, sidestep the argument that the actual quantum of black money has escaped via investments in gold and real estate. Let us assume that the real intent of the initiative was not to catch black money hoarders but to fast-track the digital transition of India’s massive rural economy. Even in that case, the PM and his team have fallen short.

The Pradhan Mantri Jan-Dhan Yojana (PMJDY) laid out a wide, albeit weak, banking network 2014 onwards. Instead, a concerted effort to strengthen ancillary banking mechanisms and internet connectivity should have been undertaken. Inoperative ATMs, low usage of PoS machines, dismal broadband connections, poor internet speed and a subpar cyber security structure have all contributed to undermining the demonetisation drive.
Consider the case of RuPay cards, launched in 2012 by the National Payments Corporation of India. Since FY12, these cards have steadily gained usage. According to a JM Financial report, of the 645 million debit cards in India, RuPay cards accounted for an impressive 38 percent in February 2016. Considering debit and credit cards together, RuPay accounted for 35 percent in December 2015.

But so far, these cards have mostly been used for ATM transactions. But their usage on PoS machines hasn’t taken off. The fear and reluctance of Indians to transact outside the cash milieu obviously contributes to this. For instance, in February 2016, of all the transactions done on RuPay cards, only 4.1 percent were done via PoS machines, against 20.4 percent via ATMs.

But then again, blaming the low usage of RuPay cards on PoS machines solely on people’s fear of stepping outside the cash dynamic will be unfair, given that India has one of the lowest penetrations of PoS machines – only 1.2 million machines for over 14 million estimated merchants.
The demonetisation experiment has shown that the need of the hour is to boost the presence of PoS machines. The growth in number of transactions and value of transactions at PoS machines since FY12 shows that Indians are more than willing to transact using their cards.

The other side of India’s growing engagement with PoS machines is a decline in the number of transactions using debit cards via ATMs. In FY12, the average number of transactions at ATMs per debit card was 20.1 times. By March 2016, it had come down to 12.7 times.
Even payments through prepaid instruments like e-wallets have been increasing, along with electronic and card payments. On the other hand, paper payments have fallen dramatically – from 26 percent in FY15 to 16 percent by February 2016. 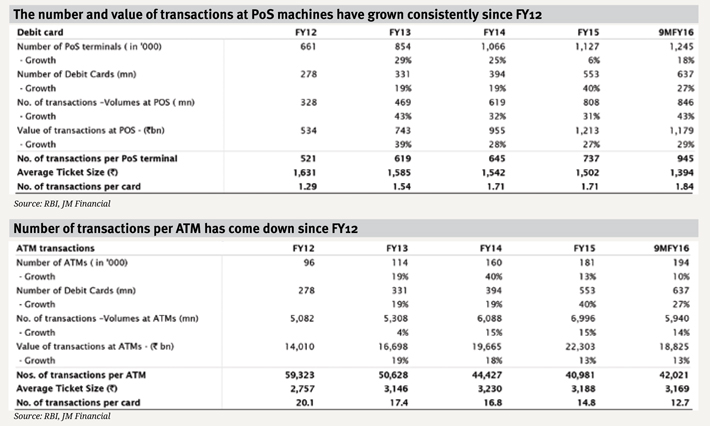 However, the demonetisation policy is far from being put on the right track as long as teledensity figures in India continue to be, not just in the red, but also heavily skewed towards developed states vis-à-vis developing states.

Even if the government manages to overcome these issues, there is the problem of rising cybercrime in India. From 2013 to 2015, there has been a distressing 84 percent rise in the number of cybercrimes in India. This is at a time when the framework for registering cases under the Information Technology Act is still in the works and the law is far from comprehensive and is only evolving.