Notes of a social science nomad

Shiv Visvanathan rightly prefers to be introduced as a social science nomad. He is an itinerant thinker, wandering across boundaries of academic disciplines and professions. An anthology of his writings naturally displays that eclecticism. There are blogs, columns, essays and position papers; published in top newspapers and small journals. The same holds for his choice of subjects too: from ‘Deciphering Sonia’ (originally published in Governance Now) to the Maggi controversy, from previously unpublished ‘The Fate of Gandhian Scholarship’ to ‘Dara Singh: The Last Action King’. The diverse fare here is a rich treat. 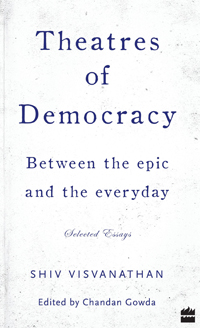 Visvanathan’s nomadic traits also make him a sort of go-to expert for journalists. More than a decade ago, when he was not so prolific in writing columns for newspapers and magazines, he was the one a reporter would call up for an expert quote when the subject of the news story won’t fit any discipline. As he started devoting more time to column writing, he turned out to be the man an editor would turn to when an unbiased, fresh opinion was needed on a topic done to death. When we at Governance Now thought of including an essay on Arundhati Roy, who else could have we turned to for a novel take beyond the predictable ones?

In other words, Visvanathan has a way of avoiding prefab, clichéd positions of the left/right, liberal/conservative camps. That is why his writings leave you with something to think about.

If he were part of any of the tents in the commentariat, the first word of this volume’s title would have been different. ‘Theatre’ connotes play, playfulness, performance, show, drama, theatricality, make-believe recreation cut off from the real life. It implies looking at democracy with an attitude that would be termed postmodern in his academic world and sceptical in his column-writing avatar. This attitude means little faith in the emancipatory capacity of any ideology, any politics. Simply put, the columnist will unpack the conundrum called Rahul Gandhi in the same way he will deconstruct Narendra Modi, considering their ideological stances as just another marketing gimmick.

Looking at the last couple of years, we probably need a strong dose of that cynicism. But that does not mean democracy is merely a carnival for him. Superficially, here is an academic with an unusual flair for writing, gleefully bringing his high theory to bear on ‘Ambassador versus Maruti’ or ‘football vs cricket’, giving us an Indian edition of Umberto Eco. Deep down, he is a scholar with commitment and responsibility. Blame it on his subjects, then, for turning democracy into a theatre. For proof, read his essays on Gandhi.

Book details:
Theatres of Democracy: Between the epic and the everyday
By Shiv Visvanathan, Edited by Chandan Gowda
HarperCollins India
430 pages, Rs 699