In search of Bengalis and the myth in Benaras I had grown up hearing the name Kashi frequently. Every now and then people would express their desire to settle in Kashi out of anger, disappointment, sadness, neglect but rarely for religious reasons. After every fight, my grandmother would scold my grandfather saying, “If you cannot put up with me please send me to Kashi”. I learnt much later that Kashi is a holy city for Hindus on the banks of the Ganges.

Unlike the elderly, I seldom hear my parents or their contemporaries mention Kashi. Like the slowly decreasing population of my grandmother’s generation, the name Kashi is also dying out. It is now Varanasi or as Bengalis still call it, Benaras.

I had heard stories about the Sanskrit tolas or pathsalas in Benaras from my paternal grandfather where many relatives had studied the language. Now was the opportunity to locate these memories. As I reached Varanasi, I was eager to trace the steps of my ancestors.

The best way to find out about the Bengali community of the city was to start from Bengali tola, I was told. As I entered the narrow lanes of Bengali Tola crowded with buildings with architecture reminiscent of the early twentieth century Bengal, I struggled to find Bengalis. I stopped at every shop to find a Bengali but to my disappointment I was told that very few Bengalis remain in the locality.

I finally met two elderly Bengalis carrying a bag of fish and vegetables who confirmed what I had been hearing. “You won’t find many Bengalis living here anymore. Most of the properties here are now owned by North Indians,” said Samudra Shankar Chakraborty who has lived in the city his entire life.

However, the engraved names of the original occupants still remain on the houses.

I had almost given up when I spotted Mukherjee book depot. Its middle aged owner Chanchal Mukherjee looked somewhat sceptical. “A few days ago another reporter had come enquiring about the Bengali community in Varanasi,” he said mildly irritated.

As I pressed on, he told me that his family has been living in Benaras for five generations. “My forefathers came to the city and set up Sanskrit school. There was a thriving Bengali community but only a shadow of it remains,” he said.

As he spoke my eyes wandered around his shop. The interior lacked sophistication and books were casually stacked on the wooden shelves. 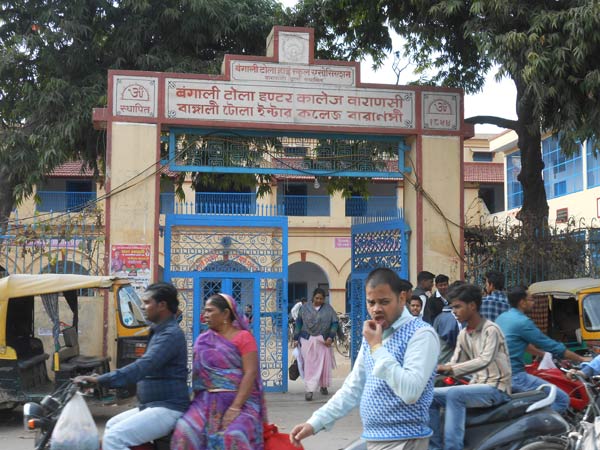 Mukherjee had not bothered to renovate the shop set up by his father, visible from the old electric wiring and switch boards.
Looking closely I could spot Abol Tabol by Sukumar Ray, collected works of Bibhutibhushan Bandyopadyay among books for various competitive examinations. He reclined against an old wooden chair while I sat on a wooden bench. Bengalis migrated to Benaras for spiritual and religious reasons, he said while turning the pages of Amar Ujala.

“In our time we used to study Bengali in school. But due to intensive competition nowadays nobody is learning the language anymore. The present generation of young Bengalis can speak the language as it is easy to pick up but they cannot read or write,” he said finally closing and putting down the newspaper. “Since my father set up a book shop I get to interact with litterateurs,” he added.

In the Bangali Tola school opposite to his shop he said Bangla is taught only till eight grades. We were interrupted by a young customer who was looking for a question bank. Seemingly reluctant to disrupt his business he asked us to meet professor Biswanath Bhattacharjee, a well-known Bengali in

Varanasi who could tell us more owing to his age and experience. I took leave after taking directions for professor Bhattacharya’s house.
Owing either to wrong directions by Mukherjee or incorrectly noting down the directions, I ended up asking local vendors and shop owners about Bhattacharya. I was directed to one Bengali house to another before someone finally recognised him and gave me the correct address.

“I am here to meet professor Biswanath Bhattacharya,” I fired back in Bengali. An elderly woman opened the door within seconds and ushered me in. As I sat down, a drowsy looking Bhattacharya emerged from the room. I told him about the purpose of my visit. Meanwhile, his wife explained to me that his vision is almost gone. “He can only make out your outline,” she said.

Originally from Faridpur, Bangladesh, Bhattacharya’s great-great grandfather was the first member of his family to settle in Varanasi. He earned his PhD in Sanskrit and briefly taught in a university in Madhya Pradesh. He served as the head of department of Sanskrit in Banaras Hindu University (BHU) till his retirement in 1990. He is well known for editing and writing books in Sanskrit. But his house did not give any impression of his fame. It was austere and non-descript both in the interior and exterior. 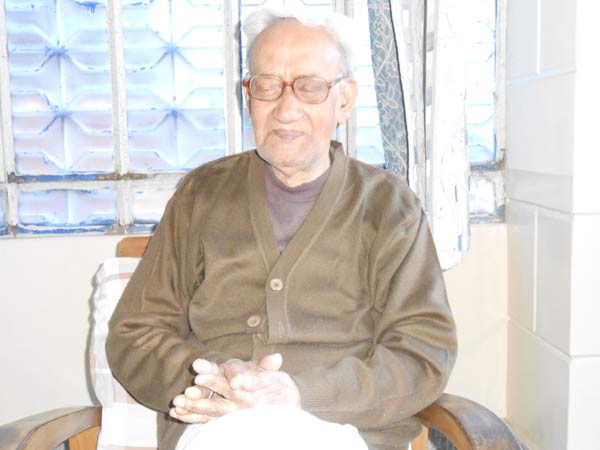 “The first Bengalis settled here from the time of Rani Bhabani in 1757. Rani made around 7 temples here around which the Bangali Tola was formed. The Bengali population was mainly from the Brahmin caste that worked as priests or taught in Sanskrit schools. The Sanskrit college set up in Benaras is older than the one in Kolkata,” said octogenarian Bhattacharya now completely awake.

Bhattacharya attributes the reason for declining number of Bengalis in Bangali Tola to people moving out from the congested lanes and dispersing across the city. “Besides the entire eastern Uttar Pradesh belt is devoid of employment opportunities. Politicians of some states actively campaign to drive out the people of Uttar Pradesh. Where will they go?”

“The maximum numbers of prime ministers are from this state. Yet the state lies in ruins. Diesel locomotive works is the only industry in the city,” he added.

Asked how the Bengali culture in Varanasi was in his youth versus how it is now, he says that Kashi had the influence of Bengali literature. “I have not studied Hindi and did not need to. In our times Bengali was a compulsory subject in Bengali managed schools under the UP board. But now it has been made an option along with Commerce, Economics etc. Only old people are reading Bengali now,” he says.

“As kids, our interaction was limited to fellow Bengalis. But now in a rapidly globalising world there is an increasing interaction between communities,” he adds. He cites the example of his own sons who speak in Hindi among themselves but out of respect they speak to him in Bengali. “I can sense the unease with which they speak the language,” he said adding that his grandkids do not speak the language at all.

He lamented the demise of the Sanskrit language. “Sanskrit pathsalas are very mismanaged nowadays. Only people keen on government jobs study the language as it increases their chances of getting hired,” he said.
Asked whether he ever considered repatriating to Bengal, he said, “My neighbours have repatriated to Bengal post retirement. Kashi is my city. I was born here, studied and worked here.”

He used to conduct Durga puja at his even a few years ago. “I gave it up as my age and health did not permit it anymore,” he said. Instead he chooses to join in the celebrations in nearby localities.