The bust of Lachit Barphukan in the NDA campus (Image courtesy: N.Konwar/Creative Commons) 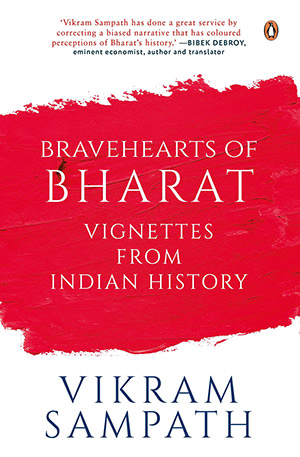 A student has an assignment for her history class: Write about a thousand words on a lesser-known freedom fighter, someone other students have not heard of. The parents’ suggestion: Mahadev Desai. The teacher’s reaction next day: Try another name; this one even I haven’t heard of.

History, in other words, is a crowded place. Bahuratna Vasundhara. Our land is full of gem-like personalities, and we know of and remember only a few of them. Who have heard of Vasant-Rajab and their unusual sacrifice? A queen-mother in Gujarat in medieval times left us a lake that’s perfectly circular except for a bit where the land was not acquired because an old widow refused to vacate her hut. The lake is still around, but her story has gone missing from the state textbooks after the mid-nineties.

Vikram Sampath, whose works include the biographies of V.D. Savarkar and Gauhar Jaan, aims to make amends. In his latest work, ‘Bravehearts of Bharat: Vignettes from Indian History’, he writes about fifteen Indians who should be better known for their acts of bravery. They are: Lalitaditya Muktapida of Kashmir, Rajaraja Chola and Rajendra Chola, Rani Naiki Devi of Gujarat, Rani Rudrama Devi of Warangal, Maharana Kumbha of Mewar, Rani Abbakka Chowta of Ullal, Chand Bibi of Ahmednagar, Lachit Barphukan of Assam, Kanhoji Angre, Banda Singh Bahadur, Martanda Varma of Travancore, Devi Ahilya Bai Holkar of Indore, Rajarshi Bhagyachandra Jai Singh of Manipur, Velu Nachiyar of Sivaganga and Begum Hazrat Mahal of Awadh.

One can debate the specific choices. Barphukan, for example, is no longer a lesser-known figure: an award was instituted in his name at the National Defence Academy in 1999 and a bust of his placed in the campus. An impressive statue of Banda Singh Bahadur came up at the Mandi House metro station right in time for the Punjab assembly elections of 2017. Ahilyabai Holkar’s name has always burned bright in public memory. No serious objection here, however, as most names are unknown to most Indians.

One can also debate the tone in the introduction: “We had been handed down our understanding of our own past from our erstwhile colonial matters, which we had then perfected with our own set of biases political expediency and ideological tilts.” Not to mention a pitiable lack of attention to details including of proofreading matters. The pitch of ‘bravehearts who fought to protect their rights, faith and freedom’ smells of the very “biases political expediency and ideological tilts” the project supposedly attempts to counter.

Yet, there’s not much to debate about Sampath’s other organising principle, which is to counter the other “loophole in the way popular historiography exists”. Much of history taught in schools and colleges, he notes, is the history of Delhi, and rich regional narratives are neglected. The eclectic list of the fifteen heroes does indeed correct that tendency.

What makes this book a worthy addition to any history buff’s personal library is that it offers an exciting reading and wealth of information about the fifteen extraordinary Indians. Lachit’s name may have captured popular imagination, but the reader will find a full-blooded profile of the warrior here and know him better. Sampath has dipped into a wide range of sources and penned thrilling narratives.

The reader would look forward to learn more about other unsung heroes and lesser-known episodes from this accomplished author.