A costly necklace of ports?

The Rs 8 trillion Sagarmala project comes with huge promise. But are we prepared for the social and economic costs? In the sultry May of 2015, union minister of road transport and shipping Nitin Gadkari was meeting officials at Parivahan Bhavan, a stone’s throw from parliament. They were discussing Sagarmala, an initiative that is humungous and hugely ambitious: over 400 port-related projects along the over 7,500 km coastline of the country, a time span of 20 years, and an estimated expense of Rs 8 lakh-crore (or eight trillion rupees), which is more than a third of India’s 2017 budget. As the name indicates, it envisages a garland of ports and SEZs that will make logistics easier for manufacturers and exporters. It’s also a pet project of prime minister Narendra Modi, who spoke of the project ushering in a maritime ‘blue revolution’ harking to an age when Indian ports and merchant ships invigorated trade with Africa, the Arabian Gulf, Iraq and Persia to the west and southeast Asian countries like Burma, Thailand and Cambodia and as far as Indonesia to the east. 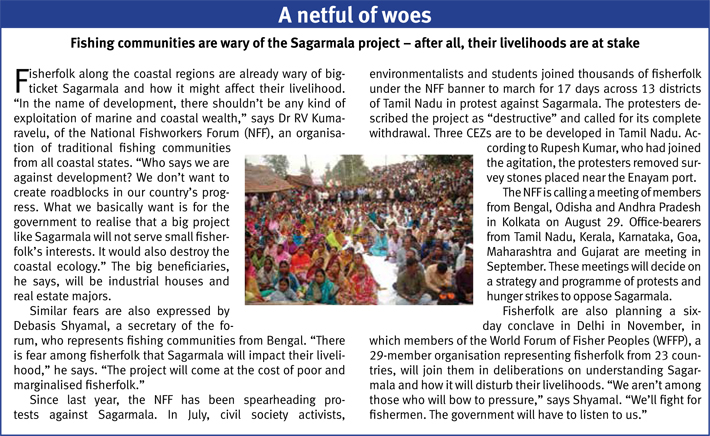 Jobs and GDP are the two major areas in which the Sagarmala initiative is expected to be a game-changer. The national perspective plan claims that the industrial clusters could generate 40 lakh direct and 60 lakh indirect jobs – one crore jobs in all. A study by the multinational Ocean Group, which has diverse interests, speaks of the Sagarmala project adding two percent to the country’s GDP. NITI Aayog CEO Amitabh Kant says that if India is to accelerate its growth rate, already between seven and eight percent, the only way is to penetrate the global market – and only ports can drive that growth.
Huge savings, too, are projected: the government hopes that the nation will save Rs 35,000 crore to Rs 40,000 crore just on logistics costs.
Indeed, expectations are running extremely high. Long-term planning – not particularly a strength of governments – is key to Sagarmala’s success. Besides, since the project will only take off in phases over two decades, business and industry will have to look through predictive telescopes to retain relevance in the long term, given the turbulence in global economics and geopolitics. There are also advances in technology – automation, for instance – to watch out for, as these could render skilling intiatives fruitless. In an age in which agile and shape-changing plans succeed, this slow-moving mammoth, with all its associated environmental and livelihood-affecting risks, is a major gamble. It will take the government and its many departments involved a lot of careful and flexible planning to bring Sagarmala to fruition.
shankar@governancenow.com