Whose womb is it anyway?

A stringent bill proposes to ban commercial surrogacy. Shouldn’t it rather ensure that surrogates are not exploited, for an outright ban might well drive the business underground? In the nine years of my career here, I have not seen a single instance of a couple bringing along a relative who will bear their child as a surrogate mother,” says Inderpreet Kaur, head coordinator at Baby Joy, a west Delhi-based clinic that provides in vitro fertilisation (IVF) and surrogacy services to childless couples. Doctors and administrators at hundreds of infertility clinics across the country will second Inderpreet: in India, it’s almost unheard of for a surrogate mother to be related to the couple seeking treatment.

But the draft Surrogacy (Regulation) Bill, introduced in Lok Sabha last November, proposes to change that drastically – and, some would say, impractically. If passed, it will only allow a relative of a couple to bear a child for them. It will also ban commercial surrogacy, that is, paying a woman, usually poor, to bear a child for a couple. The bill also proposes some strict conditions: the couple must be married and heterosexual and must not have had a child for at least five years; a woman can be a surrogate only once in her lifetime; the surrogate should be a close relative – a sister, sister-in-law or daughter-in-law, according to external affairs minister Sushma Swaraj, who announced the bill. (She was part of the panel that drafted the bill, though the matter isn’t in the purview of her ministry.) According to her, the bill will bring surrogacy as it is practised today in line with “Indian ethos”. But this will slam the door to parenthood on the faces of thousands of married, unmarried or homosexual couples, besides singles, who choose not to adopt.
There’s no denying the commercialisation of surrogacy. It throws up serious problems, including (as the supreme court remarked, hearing a PIL by Jayashree Wad in 2015) that of a woman’s dignity. Sometimes surrogates are cheated of payment, or paid too little. Even though they may be paid handsomely, nourished sumptuously and counselled carefully, surrogates undergo all the mental and physical agony of motherhood, only to be torn from a child they have borne. Which in itself is traumatic. Surrogates have been called ‘half-mothers’, a cruel veil through which their emotional burden is all too discernable. In Politics of the Womb, Pinki Virani writes about surrogates suffering lactation pangs, often on hearing an infant cry, months after separating from the child they bore. She narrates stories of women coerced into surrogacy by husbands or families to earn money. She also red-flags the possibility of pedophiles or other perverts using surrogacy to create baby flesh to groom for their needs or for sale. Others speak of children abandoned when they are born with deformities or couples divorcing immediately after a child is born (raising the suspicion that an adoption deal might have been struck). The whole process of surrogacy needs regulation. But the tight restrictions proposed will only drive surrogacy underground and spawn a black market.
Perhaps the strongest argument against a prohibitory regimen for surrogacy is that in most cases there are no complicating circumstances: the would-be parents are ordinary folks, the would-be surrogates are willing to rent their wombs.
***

“No one forced me. I took this up because I need the money,” says Pinki, a 28-year-old mother of two who is now pregnant with her second surrogate child. The clinic carrying out the procedure keeps her in its surrogacy home, a flat in Chanakya Place, near Janakpuri in Delhi. Her five-year-old son and three-year-old daughter are with her. She says she is well cared for: “The fruits and vegetables I get here, I could not have when I was carrying my own children.”
Pinki is from Moradabad in Uttar Pradesh, but for seven years, she has been living in a rented room in Uttam Nagar. Her husband drives an autorickshaw and earns around Rs 800 daily. “We need the money,” she says. “So when I saw an ad by this clinic in a magazine, I contacted them and became one. My husband supported me. If it were not for this, my family had nothing much of a future.”
At the surrogacy home, she spends the day chatting with the three other surrogates, watching television, cooking for herself in the common kitchen of the 2BHK flat. Food, eggs and vegetables supplied by the clinic arrive every week. When her children return from school, she watches over them as they finish homework or join children of other surrogates in games of carrom or ludo. 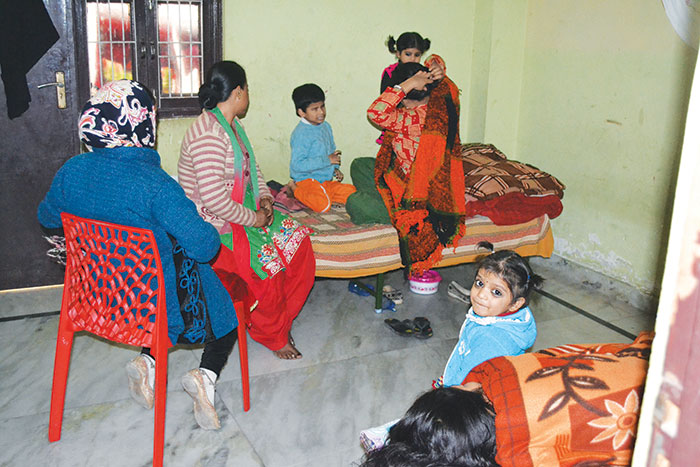 Surrogate mothers at a flat in west Delhi where the clinic that has hired them keeps them sequestered to take care of their diet and medication. They are allowed to meet family members only once or twice a week, but may keep their children with them