What can be termed as total apathy on part of the railway administration a young scientist from Defence Research and Development Organization (DRDO) was beaten by three persons in broad day light at the busiest platform number 16 at New Delhi Railway station on Wednesday afternoon. While the three men assaulted the young scientist, Railway Protection Force (RPF) officials stationed there stood as mute spectators. When Governance Now (the reporter was present on the spot at the time of assault) asked the RPF men to take action and intervene, they said 'it's not their job'.

When the deputy commissioner of police (DCP) Railways (Crime) was contacted over WhatsApp, the DSP responded in a rather lukewarm manner by sending a reply that just said “Ok”

A day after the incident which was first reported by Governance Now, office of MoS, Railways, Manoj Sinha took cognizance of the entire episode and IG (Railways) was asked to investigate the matter. 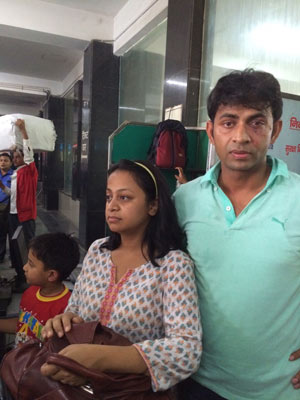 TN Mandal a young scientist, his wife Elina and four year old son were travelling by Howrah Rajdhani Express to Asansol which was scheduled to depart from the station at 4:20pm . At the entrance of the station while their luggage were scanned, three persons who beat Mandal, allegedly tried to break the queue and push their luggage first. Following which Elina protested and the three persons abused her and manhandled her. Seeing this Mandal tried to intervene and was beaten by them with helmet.

The lethargy and apathy of the railway administration became evident as the RPF men totally denied to intervene and help the victims.

After waiting for more than 40 minutes with no help coming Mandal boarded the train. Mandal told Governance Now from the train that he has not been provided any first aid and was told by the police, who contacted him after he boarded the train, to get down from it then only his compliant will be registered.

Earlier, Manoj Sinha, MoS, ministry of railways at a Governance Now event had talked about efforts made by the Indian railways to ensure safe and comfortable journey for the passengers. He had said that safety of passengers is the priority while commuting and that all the officials are being gender sensitised to ensure safety to female passengers. Incident such as this debunks such big claims.