The Yamuna is considered holy. But over several decades, it has become so polluted, it no longer evokes the pristine images the puranas painted of it. Thinking of the Yamuna, in fact, brings to mind images of black water, expanses of white foam, dry stretches, pesticide-laden farms growing vegetables on the floodplains along Delhi, festivals that are a riot of gulaal, puja items and idols brought for immersion. The river is choking to death despite 22 years of monitoring by the supreme court and thousands of crores being spent on cleaning it.

Some voluntary groups, however, have kept up a valiant fight. Among them is the Yamuna Jiye Abhiyaan, which has completed 10 years. Set up on February 7, 2007, this civil society campaign has carried out research and led campaigns to protect and rejuvenate the river.
It all started with a group of like-minded people coming together to protest against the Times Global Village shopping festival in 2006-07. The activists moved the Delhi high court, demanding that nothing should be built within 300 metres of the Yamuna. By the time the court heard this, the first edition of the shopping festival had already taken place. However, it could not be turned into an annual event, as the organisers had planned. (Ironically, despite much opposition, the Art of Living Foundation organised its World Culture Festival at the same site in 2016.)
In 2007, twenty-two people from seven environmental NGOs signed an MoU for ecological restoration of the Yamuna. They were: Toxics Link, Lawyers Initiative for Forest and Environment (LIFE), Centre for Media Studies (CMS), Paani Morcha, Ridge Bachao Andolan, Maatu Jan Sangathan and PEACE Institute Charitable Trust. 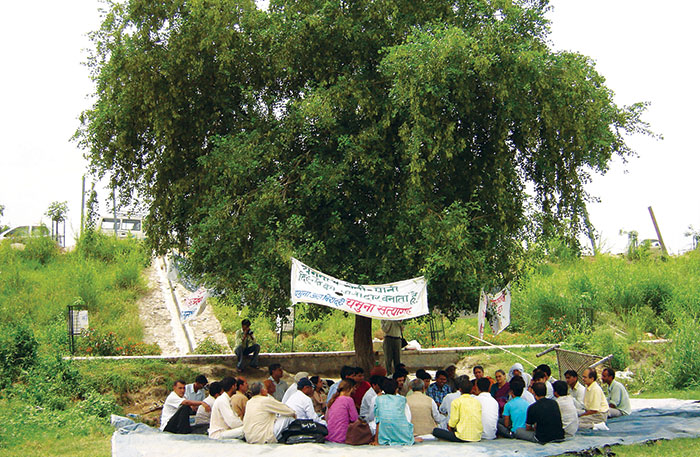 People particiapting in the Yamuna satyagraha, held under a shisham tree, against the construction of the Commonwealth Games Village (Courtesy: YJA)

(The article appears in March 16-31, 2017 edition of Governance Now)
ridhima@governancenow.com