How a PSU takes land for mining On October 1 last year, Mehtab Alam Ansari, 30, who worked as a tailor in Delhi, had arrived in his village, Chepa Khurd in Barkagaon tehsil of Harazibagh district, to celebrate Eid with his family. That morning, he was nearing Dadi Kalan, a neighbouring village, to meet an acquaintance when he heard gunshots near the chowk. Mehtab Alam turned around to run, but was hit by a bullet and died on the spot.

Besides Mehtab Alam, three others were killed in the firing: Ranjan Kumar Das, 17, of Sindhwari village; Abhishek Roy, 19, of Sonvarsha village; and Pawan Kumar, 17, also of Sonvarsha. Several others were injured in the police firing. These villages are among the 25 villages in the region that have been resisting the acquisition of land for coal-mining.

“I’ve already lost my brother, but if they want to take our land, they should kill all of us and then take it,” his brother Madiyan Ansari, 35, says. “Na rahenge hum, na zameen mangengey! (If we are not there, we won’t ask for the land).” Alam is survived by his wife Shakila Khatoon, a daughter, and two sons.

The National Thermal Power Corporation (NTPC), a PSU that has been awarded coal rights in the region, is one of India’s major players in power production. Most of its plants (19 out of 36 wholly-owned units) are coal-fuelled. The Barkagaon region, in the Karanpura valley, southwest of Hazaribagh town, abounds in coal, and NTPC wants it to fuel the North Karanpura Thermal Power Station, which is coming up in Tandwa, in the neighbouring Chatra district. NTPC has assigned the mining to Thriveni Sainik Pvt Ltd, a joint venture of Thriveni Earthmovers and Sainik Mining. The region – known as the Pakri-Barwadih coal block – is expected to yield some 15 million tonnes of coal every year.

The firing happened when the police came to arrest Nirmala Devi, the local Congress MLA, who was leading the protests since mid-September. Around 3 am, police arrived at the site of the dharna and kafan satyagraha. Prohibitory orders had been imposed. As the cops moved in for the arrest, around 4.30 am, the villagers resisted. Says Uma Devi, who was present there, “Nirmala Devi was dragged by the hair by policemen. I was trying to protect her. The police beat me. In the melee, Nirmala Devi’s clothes were torn. She was one leader who stood up against the BJP government’s high-handedness.”

Witnesses say that as news of the arrest spread, a group of villagers gathered and tried to stop the vehicle in which she was being taken away. The crowd tried to free her from custody. There was a lathi charge, and then police firing. Several rounds were indiscriminately fired, and those who died were not part of the dharna: in fact, villagers point out, three of them were teenagers. They say the police wasn’t firing to disperse the crowd but to kill.

Karinath Ram, who lost his son Ranjan Kumar, in the firing, says his boy was returning from tuition. “The tuition centre closed early that day, for some reason, so he was coming back home. My son died on the spot, taking a bullet to his neck,” says Karinath Ram. “I have no option but to leave the village, as I have lost my son. I can’t afford to lose any other family member.” 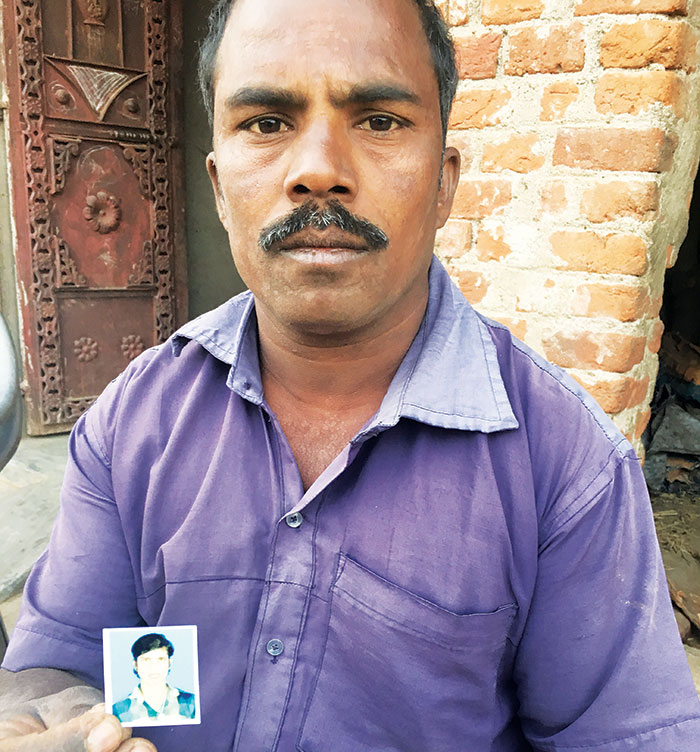 Karinath Ram, with a photo of his son Ranjan Kumar, who was returning from tuition when he was shot by police

Many others have left. Locals said three villages had almost emptied in the days after the firing as police and paramilitary personnel were on the prowl, beating up men, women and children.

“Even two months after the firing, policemen come daily to the villages to arrest those who have been named as ‘others’ in their FIR,” says Jameela Khatoon, Mehtab Alam’s widow. “Police threaten us, saying there will be further bloodshed if we don’t part with our land. Many have already left to stay with relatives.”

But Mehtab Alam’s father, Maozzam Miya, says, “This land is like our mother. It feeds us. We will not give up this land. I’ve already lost a son. I am not ready to lose my land.”
***

It was nearly 13 years ago, in 2004, that NTPC was awarded captive coal-blocks in Pakri-Barwadih, Chatti Bariatu and Keredari to supply the power plant planned in Chatra. Villagers have been resisting since then, but by 2010, NTPC had already acquired around 4,000 acres, mostly forest land. The fight is over the remaining 4,000 acres.

The legislation under which the land is being taken away is the Coal Bearing Areas (Acquisition and Development) Act, 1957, which does not offer any safeguards to those who lose their land. The Right to Fair Compensation and Transparency in Land Acquisition, Rehabilitation and Resettlement Act came into effect in September 2013, but the villagers aren’t protected by it because there are exemptions for PSUs under 13 central laws. There is also exemption from obtaining 70 percent consent or conducting a social impact assessment.

This leaves the villagers helpless. In the face of this iniquitous imposition, villagers have held a koyla satyagraha and suggested that, as owners of the land, they be given the right to extract coal, making the mining project a peoples’ ownership project, with royalty paid to the government. Of course, no one is listening.

Instead, Thriveni Sainik Mining is employing the ages-old tactic of pitting the villagers against their own. Some 800 local youths have been hired – there’s no joining letter, but they are paid Rs 8,000-15,000 monthly – to keep an eye on villagers. The villagers speak of them as dalals.

This reporter, too, was tailed and could speak to one of them, who said his name was Mohammed Rafique Ansari. “I get about Rs 15,000 monthly, there is no guarantee in this job, though,” he says. “I’m working for the company because I have no option. At least they are paying me for a while.” He also says he’s aware that once the villages are cleared of people and coal extraction begins, he will be jobless.
Thriveni Sainik Mining denies any problem on the ground. “There’s no actual problem on the ground,” says Chandra Bhatt, an official of the company, whom Governance Now met at its Gurgaon office. “The work is going on in smoothly.”

Much of the 4,000 acres NTPC has already taken over for mining, as mentioned above, is forested land. Mithilesh Dangi, a homoeopath who also runs the Azadi Bachao Andolan, an activist group, speaks of how procedure been bypassed even for this. "NTPC is taking over land by desecrating the law," he says. Consent, he says, has not been obtained from gram sabhas but from forest committees of villages. "The forest committee works to protect forest, it does not have the right to transfer forest land."

He also lists the sequence of events: the allotment of blocks was in 2004, and NTPC claims that the land was transferred by the forest committees in 2010. "Then why," he asks, "did NTPC have to wait till 2016 to begin mining?" Dangi then handed out copies of some of these "Sahmati Patra" (consent letters) from "Gram Van Prabandhan Avam Sanrakshan Samitis".

"In all of them, the format and the wording is the same," he points out. "Consent letters from villages that are far apart--such as Sonvarsha and Sidhwari--follow the same pattern. Look at how the animals are listed: first gilahri (squirrel), then kharghosh (rabbit), then siyar (jackal), and last saanp (snake). Not one village has mentioned other animals or mentioned them in another order! It's probably a format handed out by NTPC. There was no actual consent taken, and anyway this is from the forest committee, not the gram sabha."

After the paddy harvest in Chepa Khurd village of Barkagaon tehsil of Hazaribagh district, Uma Devi was planning to sow potatoes in her field. But one day in December, she woke up to find deep trenches in the field, the earth heaped on either side of them. She knew who had done it. “This company will not let us live in peace,” she says. “They have already used violence. See what they are doing now! They have come to ruin our fields.” 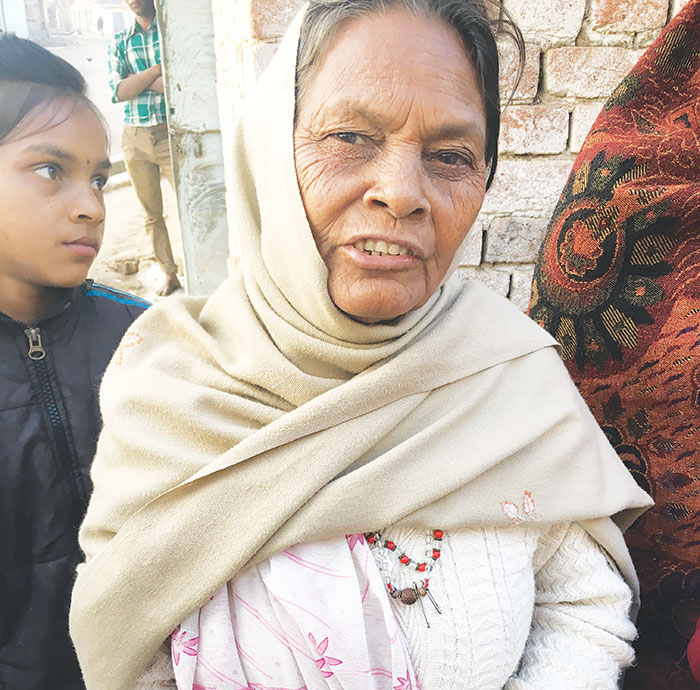 Uma Devi was planning to sow potatoes in her field, but one December morning she found large trenches dug by "the company" 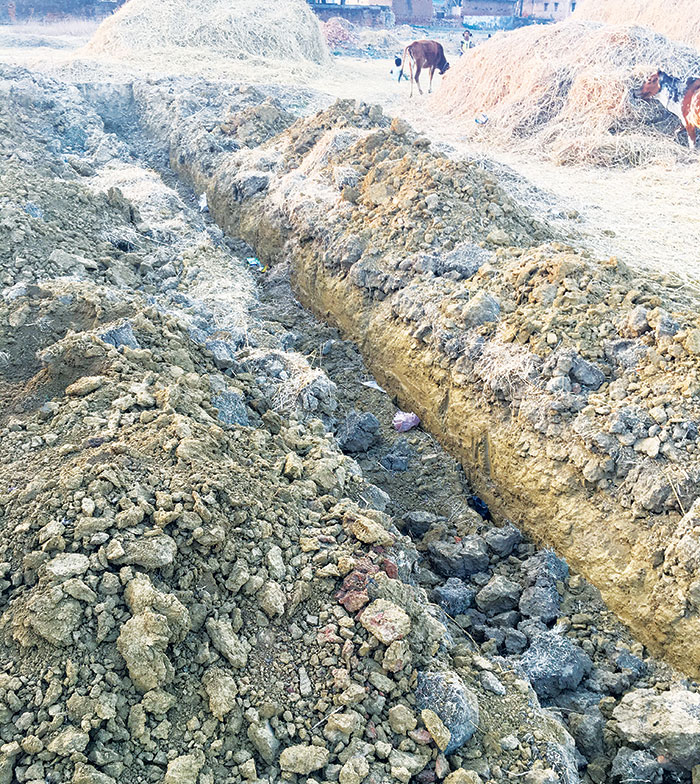 She is speaking of NTPC and Thriveni Sainik Mining. Farmers like her are almost giving up hope, afraid that such harassment will eventually drive them out. Though their land sits on rich deposits of coal, the surface is fertile and the villages here are well-known for vegetable cultivation. They supply most of the vegetables consumed in the Harazibagh and Dhanbad districts. That may soon be a thing of the past.

The villagers have held out so far. But they live in fear. Police and paramilitary patrol the region, and villagers are afraid of being beaten up. With their fields being dug up, and the violence and firing that has happened, they are afraid that one day they will lose their land. They seem convinced that the government will do nothing for them.

Such exploitation seems to be the norm on the road to development, and those who resist it are being seen as agents of anti-development. When the government – and a PSU which is run by the central government – chose to muscle out resistance, it is not difficult to imagine how corporates, once they get the green signal, will deal with people like Uma Devi and the Ansaris.