India’s ‘corruptibles’ and their spectacular scams The Anna Hazare-led protest in 2011 brought the issue of corruption to the fore (Photo: Arun Kumar)

Heavily sweetened dirty deals have always raised a stink and there is no end to insatiable greed. 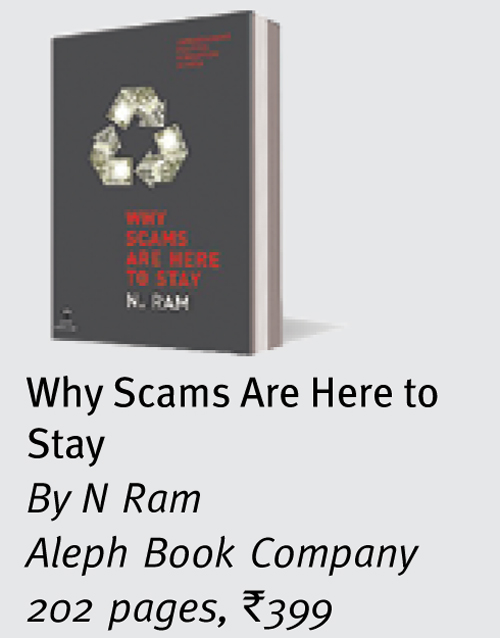 An interesting anecdote shared by Ram is that when strenuous damage limitation and cover-up efforts were underway in India and Sweden, a tip came from unexpected quarters. “During the course of an informal conversation at the Rashtrapati Bhavan in 1988, R Venkataraman, president of India who had held various key ministerial portfolios including defence, and was known for his integrity, said to me, ‘Don’t you know that the standard rate of commission in major defence deals is 6 percent?’ ”
The book mentions the deadly corruption system in BJP-ruled Madhya Pradesh’s ‘Vyapam’, which involved a set of ingeniously devised criminal services provided on a rate-card basis, by the racketeers to students and job-seekers to cheat their way into state-run medical colleges and government jobs. The book should have, but does not go deeper into the Vyapam scam.
The author describes Tamil Nadu as a case of grand corruption. “It has specified rates for facilitative, collusive and extractive corruption, depending on the sector; fixed collection quotas, sweetened with incentives, for ministers, bureaucrats, and other collection agents; and no-nonsense enforcement of the rules.”
Ram suggests some remedial measures to tackle the deep-rooted malaise of corruption. He calls for action on the legislative front, including notifying without delay the Whistleblowers Protection Act. Action has also been sought on the need to overcome the lack of enforcement capacity. The author also stresses upon the need for stricter, cleaner and more effective regulation, besides raising the visibility of corporate and private sector fraud. An important suggestion is for reforming and cleansing political finance and electoral funding.
The book will be of considerable interest to researchers and academics, but for the average reader, it could be a clunky read in some parts. The narrative could have been much better handled. The section on case studies could have been more expansive since there is a lot of material in public domain, on a string of scams that have rocked this country over the past few decades.
rahul@governancenow.com