...They may not get another chance to see it as the water level of the famous lake is reducing at an alarming pace The lake these days, with the shoreline drastically receded

Here is no water but only rock,
Rock and no water and the sandy road.
The road winding above among the mountains,
Which are mountains of rock without water.


TS Eliot did not write these lines in ‘The Waste Land’ while looking at the lake in the famous tourist town of Nainital. But he could have drawn the same inspiration had he been watching it this year since January.

The lake level at the turn of the year went down as never before. Following the retreat of somewhat erratic monsoon in September last year, there has been hardly 20 mm rainfall in the past seven months. 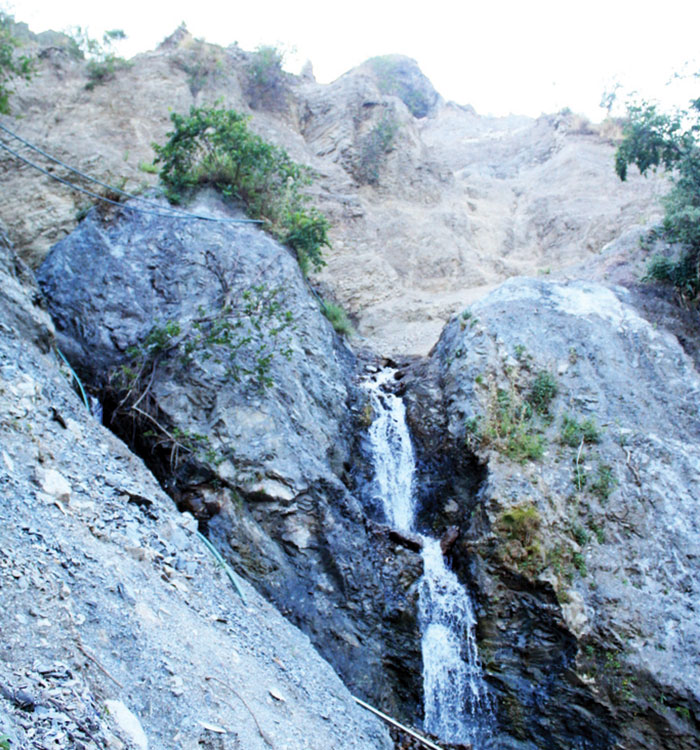 It is not that the shoreline of the Nainital Lake receded only this year; it has been, by and large, a regular phenomenon for the last four-five years. Complacent in the face of the fact that the surface runoff in monsoon would replenish this 1.4-km long and 0.45-km wide lake in Uttarakhand with a mean depth of 18.5 metre, the government machinery never took it seriously.

When the lake did recede quite alarmingly in 2011, I had asked the district administration about the possible reasons of the decreasing level. The blame was put on the penstock of a defunct hydropower project of the colonial days. This penstock was hanging about five feet above the water level then.

The natural exit of the lake is at the eastern end. It was here that while raising an embankment to increase the volume of the lake, the British had put a gauge way back in the 19th century. When the water level in the lake decreases enough to touch the bottom of this gauge, it is referred to as zero level. There is no standard scale to measure the fall beyond this level. Officials in the control room, just above the embankment, observe the formality of measuring the fall beyond zero level using a pipeline, close by, as a reference point. Perhaps what has never happened in the past hundred years in all probability (records are available only for the past 40 years), is that this year the lake touched zero level in the month of January itself. From 2011 to 2014, the referred level had arrived at in the month of May. In 2015, with a record rainfall of 4684.83 mm in winters, the shoreline did not touch zero level throughout the year. This year, the shoreline, as on date, has gone down by more than eight feet and is reported to have been receding at the rate of around six inches per day. 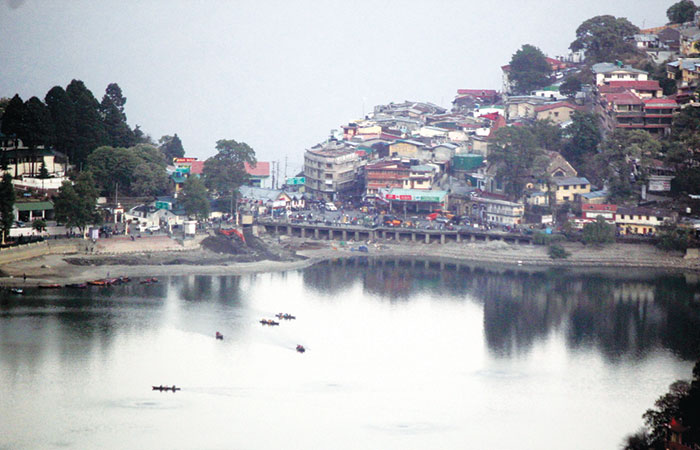 For many senior citizens of the town who do not remember seeing the lake getting reduced to such an extent ever before, it is the divine retribution for certain aberrations in the annual worship of a deity, believed to be the protector of Nainital and worshipped all over the Himalayan region. Then there is this folklore, recalled by quite a few, of the curse of a highly revered saint from this region who took a vow never to visit the town again after being hurt by a certain incident decades ago. The saint had apparently also made the scary prognosis that in the coming hundred years the town would get reduced to an expanse of rocks and boulders. While the governance and bureaucracy – already in shambles with a misplaced list of preferences since the inception of the state – are in a complacent mode providing quick solutions to avert the immediate crisis of drinking water in Nainital, the over 41,000-thousand inhabitants of this tourist town are grim with the unabated drying of the lake. A majority of these inhabitants – from a rickshaw-puller to a boat or taxi operator to academicians, hoteliers or shop owners – have a stake in the lake. Besides being the only source of drinking water, this lake is a major tourist attraction. As per the official data from the department of tourism, around half a million tourists from all over the world visit the town annually.

Toeing the line of administration, it will be too simplistic to conclude that the absence of winter rains alone is responsible for the dwindling water level. Substantiated by various researches, it is an established fact the winter rains account for just 20 percent replenishment of the lake water. Besides, winter rains in this region have by and large been quite erratic. In 1985, the total winter rain was just 5.5 mm yet the lake level was 5.3 feet in the month of January. 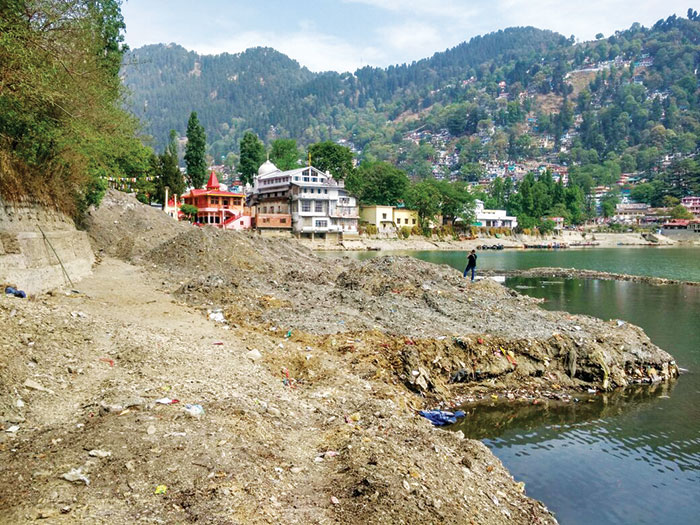 Scientists from the Institute Instrumentation Centre, IIT Roorkee, define Lake Naini as “a flow-through lake with substantial ground water inflow and lake seepage”. Groundwater contribution to this lake is 50 percent of the total inflow whereas the subsurface outflow is about 55 percent of the total outflow. They also speak of the outflow recharging the unconfined aquifers which in turn might be discharging through a number of downstream springs hydraulically connected with the lake – like those in Balia ravine, Sipahidhara, Krishnadhara etc. In the alleged absence of groundwater level data, scientists of IIT Roorkee also speak of interaction between surface water and groundwater systems still remaining “an active area of research”. Dr CC Pant, a veteran geologist from Kumaon University, while referring to the several fractures and faults that mark the lake basin and also of the much talked about ‘lake fault’ that dissects it, emphasises on the standing need of an exhaustive research before being judgmental on the issue of seepage.

Quoting Middlemiss, a 19th century geologist, that one would bring a shower of abuse upon himself if one were to mark the dangerous localities of Nainital, Pant speaks at length of the manmade and natural threats this “precariously balanced” town has been facing over a period of time. The possibility of the seepage taking place through the bottom of the lake has always been ruled out “due to the presence of the thick layer of sedimentation” by most of the scientists. A general apprehension among the masses, of late, has been that submerging around 30 aeration disks, in the recent years, to increase the level of dissolved oxygen deep into the anoxic waters of the lake has accelerated the seepage. Dr Pant rules out this possibility altogether, terming it an “absolutely far-fetched unscientific conjecture”.

It will be of interest to note that around a dozen lift pumps installed in the lake basin keep on draining the lake off by 18 MLD of water every day to meet the drinking water needs of the local and floating population. When asked as to how the ever mounting need of drinking water supply in peak summers would be met, high-ups in the department concerned informed that with their borings gone 25 metre deep in the basin, where the depth of the lake is 35 metre, supply would never be a problem. In the past 10 years, the number of registered hotels has boomed to a whopping 150-plus. There being no restriction on traffic and tourist inflow, vehicles during the summer and autumn seasons are seen cluttering every inch of space in this bowl-shaped town with the specimens of holidaying community spending their nights inside their vehicles. Around 50 percent of the total catchment area (spread over 11 square km) is concertised. Over 25 natural springs in the town, including the ones having sulfur water, have already dried down. Only one, by the name parda-dhara, is there to contribute one MLD in the routine supply. Close to the upper end of the lake, the flat expanse known by the name Sukha-Tal, which through the subterranean channels is reported to have been recharging the lake at least by 33 percent, now has a multi-storeyed parking lot. Thick RCC (reinforced concrete column) pillars supporting this mammoth structure have gone several feet down the ground level, obliterating the flow of the subterranean channels feeding the lake. A prominent fault line passes across the hill above which is situated the natural exit of the lake. This region known by the name balia-ravine is the most vulnerable part of Nainital. Geologists for the past hundred years have been warning that if ever the lake would breach, it would be from this highly erosion-prone point alone. A huge bus station with shops and basement on RCC pillars penetrating deep into the earth has been constructed right at the head of this hillock. Caught in between these two brackets of destruction, I often see in Lake Nainital the metaphor of an exhausted acrobat trying hard to keep balance on a sagging rope. Taut with care, concern and deliberations of those to whom this issue matters, I sincerely wish this rope of physiographic limitations keeps on supporting the diffident acrobat forever and ever.