Grey haired Tara Devi could scarcely believe her ears when prime minister Narendra Modi made the grand announcement that her village Jayapur in the Varanasi Lok Sabha constituency would be turned into a model village.

But that was a good two years back. Since then, precious little has happened to change the destiny of this relatively nondescript village. It now seems like a pipe dream.

Modi had spoken of adarsh gram, or model village, in his 2014 maiden Independence Day speech and encouraged parliamentarians to adopt a village in their constituency and develop it into a model village. In October that year, a blueprint of the Saansad Adarsh Gram Yojana (SAGY) was released and Modi himself chose to adopt Jayapur village, situated about 25 km from Varanasi, one of the oldest, continuously inhabited cities in the world.

Even before that, in 2002, the village was adopted by the Rashtriya Swayamsevak Sangh (RSS) as part of its ideal village initiative.

Villagers said that Modi first heard of Jayapur in April 2014 while campaigning for the Lok Sabha polls when one person was killed and five persons were injured due to lightning in the village. It was then that he decided to adopt the village.

“An MP does not adopt a village, a village adopts an MP,” the PM said during his only visit to Jayapur soon after announcing the initiative. A cake was cut to mark the occasion. Another cake was cut the next year to celebrate the ‘village’s anniversary’.

Tara Devi, who draped a synthetic sari and preferred to respond in monosyllables, had hoped that life would turn around in her village. She too had a wish – a medical facility in her village. If not something grand, then at least a primary health centre where she could go or take her ailing family members.

In the past two years, the village saw a number of visitors. Influential politicians, news reporters, TV crews, passers-by and even travellers made a beeline for the village, which suddenly became a distinct spot on the map of Uttar Pradesh. People travelling on the Allahabad-Varanasi highway would not miss a chance to see “Modi ka Gaon”, as the locals have termed it.

However, Tara Devi’s hope of seeing a medical facility remains just that, a hope.

Every Monday, she trudges towards the newly built bus stop at the village gate – and no, she doesn’t want to catch a bus. At least seven-eight elderly men and women are already sitting on the iron benches as stray dogs and pet goats roam around.

They all wait patiently for their turn since the bus shelter is being used as a makeshift clinic for a visiting doctor. A van carrying medicines is parked nearby. The doctor silently attends to the elderly patients and the van gives away medicines as prescribed by him. The medical help is routinely being provided by HelpAge India foundation.

“We have nothing to do with the adarsh gram initiative. We work independently. Our work is to look after senior citizens in all villages,” a volunteer said.

This weekly help for the elderly is the only medical facility available in the PM’s much-hyped adopted village.

Touted to become a model village,  Jayapur doesn’t even have a health sub-centre, which is the first contact point between rural community and primary health care.

“The nearest government hospital or clinic is 2.5 km away in Jakhini village. Even for minor injuries or ailments, we either spend Rs 200-1,000 at the private clinics in Varanasi city or go to the neighbouring village. There should be a doctor in this village, at least a first-aid clinic,” said a visibly disappointed Tara Devi.

It is not that there has been no improvement at all. Unlike other villages, Jayapur, which is home to 4,200 people, boasts of newly opened branches of Union Bank of India, Syndicate Bank, State Bank of India, ATMs, one ‘knowledge centre’ with a computer and a library though it remains closed most of the time. There is free Wi-Fi too in some areas, even if connectivity is patchy. 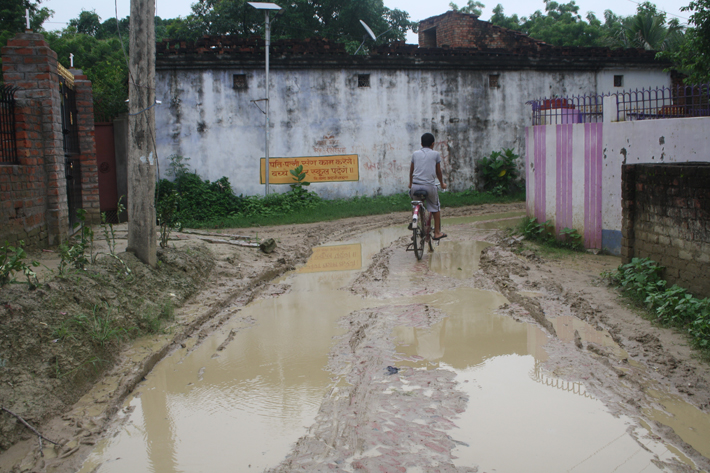 The real misery of Jayapur is the lack of basic infrastructure.

“There are no pucca roads here,” said Subhash, a grocery shop owner, while I gingerly make my way through ankle-deep mud that hardly looks like a road. And guess what, it was indeed a road till a few months back.

Last year during a government function in the village, red interlocking bricks were laid in the entire village. Due to lack of time, these bricks were laid temporarily at some places. Later, some of the bricks were stolen and some were damaged due to rains. Villagers have no option but to walk through the slippery, muddy lanes that become waterlogged during rains, worsening the situation.

“There was so much hype in the initial days. But the truth is we are no different, we are just like any other village – even worse than an ordinary village,” said Subhash as he showed us a shorter route from the paddy field to reach the village head’s home.

“Paani, bijli, sadak aur suraksha kuch bhi nahi hai yahan (the village has nothing, be it water, electricity, roads or safety),” said Chandrabhan Singh, a former government servant, as he sat on a charpoy outside his home. 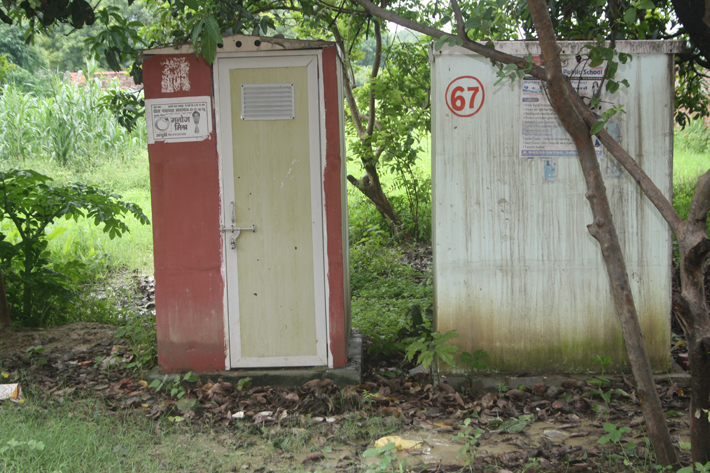 “Open the water tap and you get no water. Switch on the lights and there is no electricity. Is this a model village?” he wondered aloud.
Village head Narayan Patel concurred, “How can there now be a change if it wasn’t possible in 70 years of independence?” Patel was released from jail last month after he was arrested for allegedly beating up an RTI activist and others.

Apparently, all is not well between the newly elected village panchayat and the villagers. Some people claim that the RSS committee in the village is trying to edge out Patel who succeeded his sister-in-law Durgawati Devi as village head last year. “Some people are not letting us work. Their people are vandalising and damaging village’s newly built properties. They want a bad name for the BJP,” Patel claims.

He said, “The village was illuminated with 135 solar street lights. Two solar power plants with a capacity of 25 KW each, give connection to 850 households to switch on one light and a mobile charger. Most of the solar street lights were vandalised or stolen. It’s completely dark if you walk here after sunset. The power supply is very erratic. We get only seven-eight hours electricity in a day.”

Patel is looking forward to better roads and drinking water facility for the village. “We want these two aspects to improve at the soonest, the rest of the work will keep improving with time,” he said. 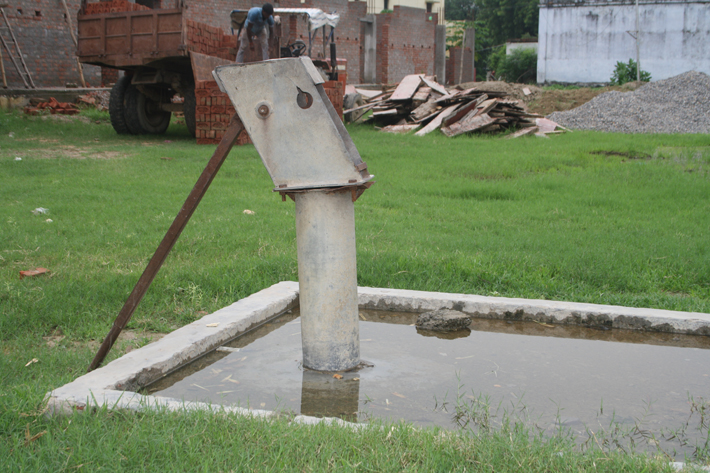 A newly built overhead tank to store 2 lakh litres of water remains unused. Jayapur is dependent on 50-odd handpumps to meet its water requirement. Out of these, eight handpumps are broken and 17 need to be re-bored.

Jayapur’s development is being overseen by two trusted Modi aides – Nripendra Misra, principal secretary to the PM, and CR Patil, the BJP MP from Navsari in Gujarat. “During the initial months, under the observation of these two people, pipelines were laid for supply of drinking water. The water was supplied for four months, but the pipes were thin and the supply stopped due to a technical snag. New pipelines will be needed to connect individual household taps with the new water tank,” Patel said.

Making villages open-defecation free is one of Modi’s key initiatives. Yet, in stark contrast, almost 70 percent of the villagers defecate in the open. As many as 350 mobile toilets, including some with bio-digesters, stand unused in different pockets of the village and in individual households. Only 50-60 toilets are in working condition. The rest are either locked, vandalised or even used to store cow dung and wood. Some toilets are unusable as the pits are overflowing. Villagers also feel that if they use toilets, it would require a huge amount of water and therefore they prefer stepping out.

Under SAGY, MPs were asked to adopt a village and turn it into a model village by 2016, and two more by 2019, covering over 2,500 villages of the 6 lakh villages countrywide. When Modi adopted Jayapur, several students, NGOs and members of private clubs in Varanasi came forward to voluntarily adopt various villages.

Some of these villages adopted by voluntary groups are doing better on various indices compared to Modi’s Jayapur.

“This is not a rupiya-paisa yojana but a demand-driven, people’s participatory scheme. There are 800 parliamentarians and in three years, 2,500-odd villages could get covered. If states were to initiate their own similar schemes with MLAs, 6,000 to 7,000 villages could get covered. One good village can affect an entire area, and a viral effect could begin,” Modi had said in 2014.

For now, life goes on at its own slow pace in ‘Modi ka gaon’, which is still hoping against hope for ‘acche din’.