Energy Efficiency Services Limited (EESL) has alerted consumers of fraudulent websites selling 9W LED bulbs under the name of Unnat Jyoti (UJALA) scheme of the government. The government has made it clear that the websites were not associated with the EESL, a public energy services company, under ministry of power.

Through a press statement on Monday, the government said that the websites – www.philips-led-at-10rs.in and pbs.twimg.com/media/CoGI9txWIAAybuk.jpg are misleading consumers by promising them LED bulbs priced as low as Re 1. To appear original, these websites are using the copyright images of UJALA logo as well as prime minister Narendra Modi. 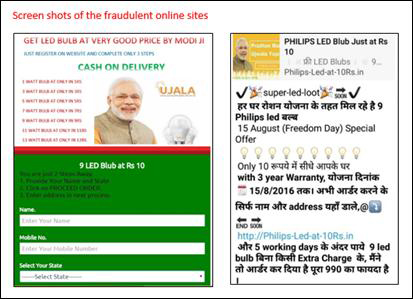 The EESL will be also file an FIR in this regard.

Customers have been asked to stay vigilant and report such complaint over social media (Twitter:  @EESL_India  and Facebook /EESLIndia. Complaints can also be registered at info@eesl.co.in.

LED bulbs, under UJALA scheme of the government, are available at www.ujala.gov.in. “For any new initiatives, EESL will communicate consumers through various media and consumers should not entertain any other means of buying products under EESL programmes. If done, EESL will not take responsibility of any faulty products,” the press statement said.

Saurabh Kumar, managing director, EESL, said, “Our team has been continuously working towards following the stringent processes that has been created by the organisation. We are keeping a tab on all the malpractices that can harm the good efforts of EESL to provide quality products to our consumers. We are taking legal routes to address such fraudulent issues and will continuously alert our consumers of such messages and advertisements through various media. We urge the consumers to purchase LED bulbs under the UJALA scheme only in the designated distribution centres.”