Grads with grades that go nowhere

The trouble plaguing Young India today is that its schools and colleges put them through the wheels but leave them without usable skills. This has to change India has been among the fastest growing economies in the world. World Bank estimated that in the 1960s, approximately 45 percent of Indians lived below the poverty line. This figure came down to around 21 percent in 2011. Furthermore, per capita GDP in India has risen from $83.8 in 1960 to $1,598.3 in 2015. This has made Indians more ambitious. Traditionally, the government distributed the increased income from development on providing free food and basic education. Now, with the rise of a more urban India, aspirations have changed. Instead of worrying about the next meal, most Indians now think about public services, inflation and infrastructure. They ask for better education, jobs and faster development as a path to prosperity.

India has been a vastly unequal society for centuries, with the majority of the population denied access to education via the caste system. But in modern India, social mobility has finally become possible and education is seen as a mode of social upliftment.

Education is seen to provide access to stable jobs. India has expanded education in the past two decades. In 2016, India had more than 700 degree granting institutions and more than 40,000 colleges. With such a large number of students graduating every year, India faces the challenge of putting them into productive employment. As I have discussed in a previous article (‘Looking for a Good Job’ in the December 16-31, 2016 issue of Governance Now), if these people aren’t put to work, a sense of disillusionment may creep into the youth.

Unfortunately, the quality of education in most of our institutions is such that most graduates are unemployable. The blame lies principally on the poor quality of education in India. Millions of job seekers have impressive sounding diplomas but many don’t have the skills promised by those certificates from substandard colleges and technical institutes. Indian universities impart subpar education and do not find a place in world rankings for higher education institutions. Not one Indian university appears in the top 200 universities of the world in the academic ranking of world universities, 2016, and only a few institutions (the IISc and some IITs) in the top 500.

Most universities conduct no research to speak of and most of the faculty do not have any papers published in journals of high repute. Bemoaning the lack of quality would miss the point that they are not expected or incentivised to conduct research and alas have fallen behind their peers globally. Most of the research is being done by Indians outside India. In the World Intellectual Property Indicators 2016, though the number of grants by India increased from 3,377 in 2013 to 6,153 in 2014, the substantial increase was seen in the number of non-resident grants. While for China, growth in resident grants drove the overall growth. The pedagogy in universities has not changed in decades and they are ill-equipped to impart education that would be useful in the current century.

The vocational training sector in India is similarly lacking. A report by Apeejay Stya Education Research Foundation shows that China has nearly 5,00,000 senior higher secondary vocational schools, whereas India has about 5,100 ITI’s (industrial training institutes, which hand out diplomas and certificates in trades such as plumbing, fitting, factory craft) and 6,000 VET (vocational education and training) schools. Germany, Indonesia, Japan, Korea, Israel and China have supported vocational education at school level on a large scale since the 1970s. 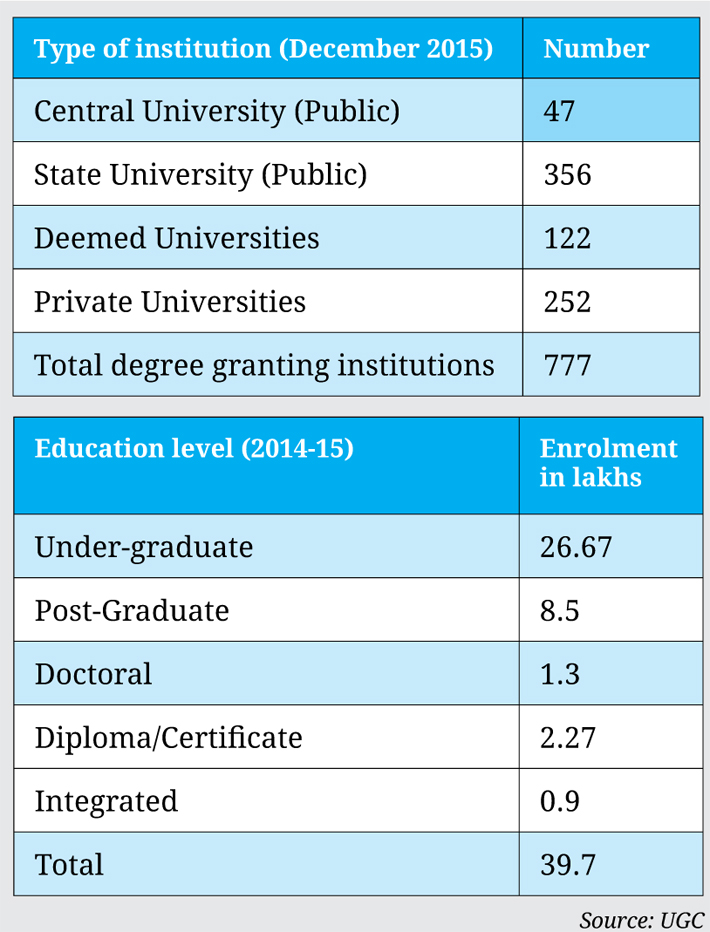 Strategy to achieve full employment must include an important component: to ensure that all new entrants to the workforce are equipped with the knowledge and skill needed for high productivity and high quality of work.

To match the skills of the labour force to the requirements of the industry, the national skill development corporation (NSDC) was launched as a public-private partnership to upgrade the skills of the growing Indian workforce. According to the ministry of skill development and entrepreneurship, only 2.3 percent of the total workforce in India has undergone formal skill training. The NSS 61st round survey on employment and unemployment indicates that about 80 percent of the workforce in rural and urban areas do not possess any identifiable marketable skills. As a result, there is a significant ‘skill-gap’ between the supply of skilled labour and the market demand for applicants with job-ready skills. The Manpower Talent Shortage Survey 2013 shows that more than half the employers surveyed in India (61 percent) say that talent shortages prevent them from hiring people with needed skills. But unlike in the US and Europe, where many highly skilled applicants are fighting over few jobs, only a minority of working-age Indians are qualified for skilled occupations. With millions of young people entering the job market each year, the sheer number dwarf any government sponsored programme to impart skill training to first time job seekers.

It would be overly optimistic to expect the industry to generate enough employment to engage all of India’s graduates every year. There are certainly some impressive Indian manufacturers, but their likes prefer to employ sophisticated machinery rather than abundant labour. This is partly down to archaic socialist regulations which dis-incentivise hiring more labour and shift it towards capital. This is at a complete tangent to India’s cheapest resource – labour. The development of China was largely on the back of its cheap labour force which not only found productive work but allowed China to move over half a billion people out of poverty. We, on the other hand, have innumerable workshops, employing handfuls of people and outdated methods. What India lacks is a ‘Mittelstand’ of midsized, labour-hungry firms. During 2000-2008, India’s boom years, India created more jobs in construction than in manufacturing, reflecting the sad state.

The (erstwhile) planning commission’s report ‘Creating a Vibrant Entrepreneurial Ecosystem in India’ said that “India needs to create 1- 1.5 crore (10-15 million) jobs per year for the next decade to provide gainful employment to its young population. Accelerating entrepreneurship and business creation is crucial for such large-scale employment generation.” The 2012 report goes on to state that, “India has the potential to build 2,500 highly scalable businesses within the next 10 years… that means 10,000 start-ups will need to be spawned to get to 2,500 large-scale businesses”.

The World Bank’s report ‘Doing Business 2016’ ranked India at 130 out of 189 global economies in terms of ease of starting a business. Starting a business and securing permits are especially difficult. India is placed among the last in enforcement of contracts. First-generation entrepreneurs are significantly affected by such an environment where the cost and time involved in establishing a business become deterrents especially to business ideas that need a first-mover advantage. Exiting a business takes even longer.

The ecosystem for starting and running new ventures has many gaps. Regulations and procedures are restrictive and time-consuming and add significant cost for an emerging venture. Banks and financial institutions are wary of lending to first-generation entrepreneurs and to micro, small and medium enterprises (MSMEs) in general, due to various norms like tangible asset coverage, debt to equity ratio etc, even though such enterprises make a major contribution to the economy, employment, and exports. This imposes constraints on their credit absorption capacity and consequently, growth.

The aim of development lies in the aspirations of the people. Once people have basic requirements like food, shelter and security, people require education and social growth. Education is an enabler, a prerequisite. When poor people desire to educate their children, they see it as a step towards social and upward economic mobility, respect and access to better services. Education determines the socioeconomic status; moving from lower working class up to middle class, for education leads to economic opportunity. It is through education that young people secure higher status jobs than their parents.  Thus, education provides the channel not only to better socioeconomic status, but also to social mobility.

In education, no doubt enrolment has improved. However, quality of education remains a big issue. Programme for International Student Assessment (PISA) tests that rank countries according to the status of their school going population found that a majority of students in garde VIII cannot either read grade II material and could not complete basic (grade II or III) mathematics. In many education indicators, like adult literacy and gross enrolment ratio, India is worse than Bangladesh and marginally better than sub-Saharan countries. This has occurred in India because after independence, the state saw itself as the provider of services rather than a supplier of services.

The state does not necessarily have to operate or manage social infrastructure, but it is necessary for the state to provide   guidelines and monitor its operation. Demographic predictions warn that the promise of demographic dividend will not last long, in any case not beyond 2050, when India’s population stabilises, and starts ageing. India needs to take advantage of its demography in the next couple of decades. The challenge for the country is in planning and acting towards converting its demographic ‘burden’ into enhanced opportunities for growth by skilling the increased youth population according to the requirements of employers. From Tahrir Square to Wall Street, growing economic inequalities and a persistent lack of jobs have caused demonstrators in many countries to demand real change from their governments. Research has shown that damages of long-term unemployment to the economic, political, and cultural life in the country are the major cause of eroding social integration in the long run. Taking cue from international episodes, the good and the bad, India has to start planning now to ensure that social integration is preserved and not broken by lack of political will or strain of political competition.

Roy is a fellow at Pahle India Foundation.