Excerpts from the book 'To the Brink and Back: India's 1991 Story', by Jairam Ramesh

Narasimha Rao’s masterstroke was the appointment of Manmohan Singh. One of his closest aides later recalled to me that even as a cabinet minister, Rao always felt that a prime minister should always have one source of senior, substantive and non-political advice, especially in those areas where the prime minster is weak [Interestingly, Narasimha Rao did not make Singh a member of the CWC – something that was done by his successor, Sitaram Kesari]. The aide also recalled Rao citing the precedent of D.R. Gadgil, who was deputy chairman of the Planning Commission between 1967 and 197.
In Manmohan Singh, Narasimha Rao found a tailor-made bulwark. It is true that Rao had told his finance minister right at the very beginning, ‘Manmohan, if things go wrong, your head is on the chopping block; if we succeed, the credit will be ours.’ Notwithstanding this warning, and despite the enormous pressure and criticism he faced, Rao backed his finance minister to the hilt, allowing him full freedom, even when his instincts told him not to.

I have always believed that the personality of the finance minister has much to do with the degree to which economic reforms seem palatable in the initial months and years. Manmohan Singh made the years of liberalization appear acceptable, largely because he defied ideological labels, and could, if anything, only be called moderately left-of-centre. He was personally very close to politicians and economists of the left; Jyoti Basu treated him with enormous respect and, as I was to discover many years later, so did Harkishan Singh Surjeet. While the archpriest of the Left establishment during Indira Gandhi’s era, P.N. Haksar [P.N. Haksar was also Prime Minister Indira Gandhi’s principal secretary] was one of his staunchest allies, Haksar’s colleague, P.N. Dhar, who was generally considered right-of-centre, was also his trusted friend.

Besides, the credibility Manmohan Singh had across the political spectrum was obvious. While S.K. Goyal from the Chandra Shekhar era was his intimate associate, the debates in Parliament of those times reveal that Atal Bihari Vajpayee, L.K. Advani and Jaswant Singh, too, held him in the highest professional and personal esteem.

At critical moments, what is said and done might matter; but what truly counts is the person who is talking and how he presents his case. The finance minister may have lacked political standing, but he had unparalleled moral authority, apart from unsurpassed intellectual gravitas. His phenomenal personal reputation for simplicity and his non-threatening style helped sell the bitter pills of devaluation, gold sales, subsidy cuts and whole-scale industrial deregulation.

Manmohan Singh’s integrity has always been unimpeachable and what better example than what he did after he and Rao had taken a decision to devalue the Indian rupee? Manmohan Singh was worried that his personal rupee balance, born out of modest dollar savings from his South Commission stint in Geneva during 1987-90, would swell with the proposed changes in the rupee-dollar exchange rate. Therefore, he informed the prime minster that the ‘windfall’ gains would be deposited in the Prime Minster’s Relief Fund.

Would I. G. Patel have been unlike Manmohan Singh has he been finance minister? Substance-wise, decidedly not; but perhaps in style, here and there. Both I.G. Patel and Manmohan Singh had studied with distinction at Cambridge University. Both had doctorates in economics. Both had served in international institutions-IG at the IMF and the UNDP (United Nations Development Programme), and Manmohan Singh at UNCTAD (United Nations Conference on Trade and Development). Both had held key positions in the finance ministry; had been governors of the RBI [Morarji Desai and H.M. Patel appointed I.G. Patel as governor of the RBI in 1977, and Indira Gandhi appointed Manmohan Singh to the same post five years later]; and had served as part of academic institutions-IG at the London School of Economics and Singh at the Delhi School of Economics. Moreover, both were sensitive to political realities-with IG being a product of the Nehruvian 1950s and very early 1960s, and Singh being a product of the 1970s when the first came into contact with Indira Gandhi. The only difference between the two was that IG was considered to be more market-friendly and Manmohan Singh little more state-friendly. It was only a nuance and nothing fundamental separated the two. 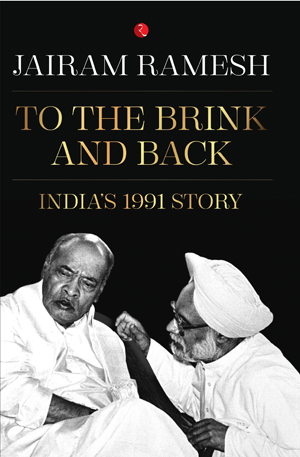 Two other appointments Narasimha Rao made proved to be very shrewd. Unfortunately, the same could not be said of his other appointments, especially in key infrastructure ministries. His choice of P. Chidambaram as commerce minister – although not at the full cabinet level but one notch lower –  ensured that far-reaching trade policy reforms got executed very quickly. Although Chidambaram had not served in a mainstream economic ministry earlier, he took to the Commerce Ministry instantly and provided a bold thrust. More importantly, the finance minister found in him a very articulate ally to champion the cause of economic reform both at home and abroad.

The appointment of A.N. Verma as principal secretary was also fortuitous. Verma had wide experience both in the Commerce and Industry Ministries, commanded respect in the bureaucracy, had a low-key but effective style, and was able to execute the prime minister’s instructions well.
There is a Tolstoyan perspective of history which holds that individuals are irrelevant and circumstances create events. Another view is that individuals matter and do decisively shape the course of history. My own feeling is that what got accomplished in June-July 1991 was inevitable, if our goal was to avoid the opprobrium of default.

The Rao-Singh duo happened to be at the right place at the right time. They had neither bargained nor lobbied for the responsibilities they found themselves with; but there they were, saddled with onerous tasks.

‘Carpe diem.’ Wrote Horace in his immortal Odes. This is exactly what the Rao-Singh jugalbandi did-they seized the day. There was no guarantee of success, and certainly no likelihood of quick positive outcomes; indeed, the results of the reform started becoming evident only after 1993. Consequently, theirs was a huge leap of faith. It was, in fact, a gamble of sorts. The most risk-averse of gentlemen took this wager only because the alternative-namely a default-was an anathema to both. Besides, they were men intent on carving a distinctive niche for themselves in India’s political and economic history [Yashwant Sinha starts his memoirs, Confessions of a Swadeshi Reformer (New Delhi: Penguin, 2007) with a chapter entitled ‘The Original Reformer?’ The question mark is misleading because he makes a self-serving case for himself to be considered so, on four counts: (i) he was the first to introduce the concept of a fiscal deficit as opposed to a conventional budget deficit; (ii) he was the first to talk about public sector disinvestment; (iii) he talked about rationalizing expenditure on subsidies, reducing allocations on major subsidies and better targeting of subsidies for the poor; and (iv) he stated his commitment to fiscal discipline in an unambiguous manner. He overstates his case. It is true that he was the first to suggest public sector disinvestment which was to be implemented by later administrations, but the Rao-Singh claim to fame is based on much firmer and larger grounds. The Chandra Shekhar government wanted to introduce trade policy reforms but didn’t. The Rao-Singh-Chidambaram troika did that and earned a permanent place in history for that accomplishment. Sinha never even mentions industrial policy reforms; actually during a debate in the Rajya Sabha on 7 August 1991, he was very critical of the industrial policy reforms announced on 24 July]. And let there be no mistake about it-they definitely did.

To borrow an analogy from Isaiah Berlin, if Manmohan Singh was the hedgehog who knew only one big thing and that is economic reforms. Rao was the fox who knew many things. It is this fox-hedgehog combine that rescued India in perhaps its darkest moment. India in 1991 could well have mirrored Greece in 2015. That it didn’t is due to the Narasimha Rao and Manmohan Singh combine.

June-July 1991 was a revolution, but it was an evolutionary one-some years in the making. There was, no doubt, a huge element of chance in what Rao-Singh did, but as Louis Pasteur said, ‘Chance favours only the prepared mind.’ Narasimha Rao’s political astuteness and Manmohan Singh’s economic wisdom brought India back from the very brink. Together, they demonstrated that a consensus can, on occasion, be created by tough executive action. They proved that sometimes, if you listen intently but do what you have set out to do unwaveringly, accord can emerge. They converted an unprecedented crisis into a not-to-be-lost opportunity. Of course, circumstances were ripe for a mindset changes, but more than being lucky by being there at the right time, they were plucky-they challenged set minds.

The hand of destiny took me close to Rao and Singh as they began saving the country. And although I remained in their vicinity for an exceedingly short while, I was privileged to play a small role-in the words of one of Rao’s closest aides-in setting history in motion.