The spark in the classroom

How Ramji Raghavan built a school of creativity, quitting the ratrace and chasing a childhood dream Not many children dream of starting an idyllic school of their own when they grow up. But Ramji Raghavan, founder of the Agastya International Foundation – which fosters the creative learning of science in students and teachers alike – not only nursed that dream, but brought it to life too.

What is more, in times in which schools are run as lucrative businesses, the school he built literally takes high-quality science education to the worst off. In fact there is no school, with regular students and teachers. What the foundation does is take its mobile laboratories and trained instructors to government schools across India and put children through the unique experience of learning science by doing, a heuristic process of discovering scientific concepts for themselves. Doing so, they discover their own strengths and find themselves growing confident about their ability to learn and grow as individuals. And at the foundation’s sprawling, verdant Kuppam campus, in the Chittoor district of Andhra Pradesh, set amidst nature, government school teachers are trained to teach science by the same methods its instructors use. Children from government schools, too, can make short visits to the campus to immerse themselves in experiential learning.
A wisp of a dream
For Ramji, the dream began a little more than a hundred kilometres as the crow flies from Kuppam, in the Rishi Valley school, near Madanapalle, also in Chittoor district, founded in the 1920s by the philosopher-mystic Jiddu Krishnamurti. Ramji was a student there in the late 1960s to the mid-1970s, and read James Hilton’s famous Hawthornden prize-winning novel, Lost Horizon. It spoke of a mythical lamasery in Tibet called Shangri-la, whose inhabitants are at peace, full of joy, and blessed with longevity. Though the Rishi Valley school itself was a Shangri-la of sorts, Ramji started thinking of one day opening a school that would do for children some of the things that the fictional Shangri-la did for its inhabitants. 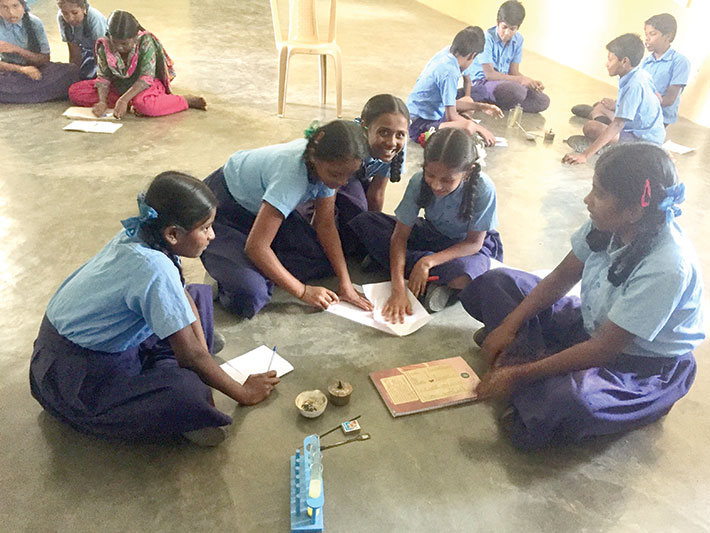 But realising that dream was a long, long way off. For Ramji also wanted to become a successful business executive, like his father, KV Raghavan, who was first an employee of Indian Explosives, in Gomai, Jharkhand, and went on to be managing director of the Alkali & Chemical Corporation of India Ltd, chairman of Engineers India Ltd, and president of EID Parry Ltd. So he went off to study economics at Hansraj College in Delhi, get an MBA from the London Business School, and then started building a corporate career for himself, at AF Ferguson first, and then Citibank in India, Puerto Rico, and New York.
But the sense of leading a life of “quiet desperation” that Thoreau spoke of, or Pink Floyd sang of in their number Time, persisted in him. That was when he had a brief encounter, in 1979, with Krishnamurti. “I was a junior at AF Ferguson, working on expenditure accounts for a fledgling NOIDA. I used to work till 2 or 3 in the morning, using calculators, for we didn’t have spreadsheets then. I remember Krishnamurti was passing through Delhi on the way to Varanasi. I wasn’t particularly enjoying my work. Anyway, I and my father went to see Krishnamurti at the airport,” says Ramji. “He asked me how I was doing, and I said it was back to the grind for me. So Krishnamurti laughed and said, ‘Don’t get your nose too close to the grindstone.’ And I was telling myself, ‘There goes a free human. And look at me,  I’m in a prison.’”
Rivetted by death
The dream remained buried. It took another pivotal incident, he says, before he actually started seriously exploring the idea of setting up a school. He was 29, in Puerto Rico, when an American colleague, Larry, called him for dinner at a Chinese restaurant. “The restaurant was packed, so there was just one a table near the entrance, where we sat down. Those days I would carry my wallet in my coat pocket and I took the coat put in around the chair,” he says. “I was wiping my eyes, being tired, and waiting for the waiter to take our order. Suddenly, the table turned upside down, and Larry was diving behind it.”

Wondering what happened, he looked about and saw a man waving a gun. The women started handing over their jewellery, and the men their wallets. “I quietly sat down on the floor. Then Larry gave his wallet. But mine was in the coat pocket, and I thought if I reached for it, he might think I was reaching for a gun and blow my brains out. So I kept quiet. Fortunately, there were things that kept him occupied, and he shouted to the others in restaurant not to look at him, else he’d shoot ‘these two guys’, meaning, us,” he says. Ramji recollects that, at the time, all he could think of was his mother – not even his father – and certainly not Citibank, or the presentation he was working on, or about moving up the corporate ladder.
“I remember thinking about this: when you are really close to death, or at least in my case, I was not thinking about work, becoming the CEO of a company. So if that is true, none of those things probably has much meaning and they are empty. Of course, I knew this intellectually. Most often, Krishnamurti would talk about the meaning and purpose of life. Remember the deathbed view of life, and much of what we strive after isn’t of much value,” he says.
Sweating the dream in a smithy
Bored with corporate life, in his mid-thirties, and with his career graph plateauing, he told his Citibank boss he wanted to leave, but the boss said they needed him. Ramji said he needed to go to India three or four times a year, each time for some two weeks; the boss allowed that, and even threw in the airfare into the deal. 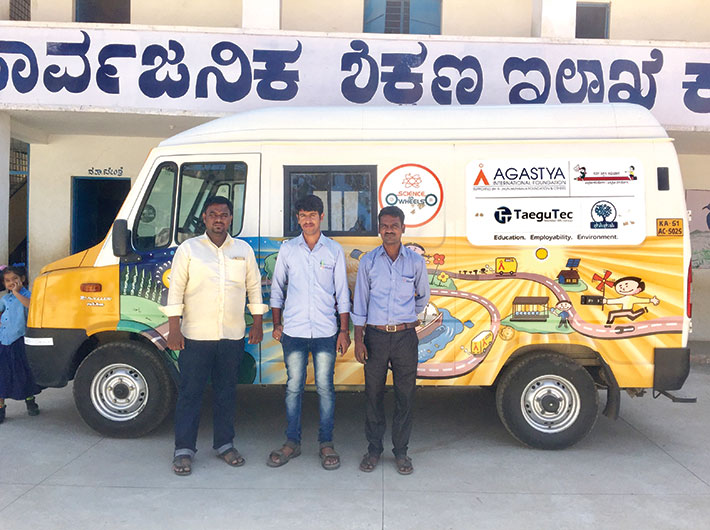 In one of his conversations with his father (who was also a student of Rishi Valley School) and S Balasundaram, a former principal of the school, Ramji popped the idea of becoming the principal of the school he passed out from. But Balasundaram rejected the idea outright; it wouldn’t be so easy to leave the corporate world and take up that assignment. Instead, he proposed, why not start a new school!
“But I never saw myself as an entrepreneur. I believed in working for an institution, perhaps moving up to become the head, not creating one myself. That wasn’t part of my background,” he says. “But the seed took root in me.”
In 1987, Ramji met people like Sam Pitroda and tried to see if he could find a big job in government. The discussions with his father and Balasundaram continued. During one such conversation, his father asked, “Do you think Krishnamurti would be happy with the calibre of students passing out of Rishi Valley?” Balasundaram said the mystic-philosopher wouldn’t. Ramji recollects, “This was in the sense that the consciousness of students was transformed. That didn’t happen, or if it did, we weren’t aware of it, was how Balasundaram saw it, and so, in that sense, Krishnamurti would have been disappointed.”

Ramji’s father replied that it wasn’t happening because Krishnamurti’s teachings required a translator and that teachers were not finding a way to take his deep thinking and translating for students in the classroom. The big idea was: curiosity is the basis for creative learning, and creativity happens in your consciousness, whereas most learning focusses on the outward part, which is questioning. “So,” says Ramji, “we realised it wasn’t enough to create a school that fosters creativity. If you want to have an impact, you have to transform teachers.”
But even by 1994, Ramji was not ready for the big leap into implementation. The thought of quitting his job (he was then in Europe, had married, and had a child) still froze him in his tracks. He discussed this with Gopi Maurya, a friend, in London. “Gopi reminded me of a story about Krishnamurti I used to tell him, about a woman who would carry a head-load of firewood from Rishi Valley to her house in a village called Detu. Krishnamurti insisted on carrying it himself, because he felt her pain. Gopi added that I wasn’t feeling the pain. The problem was, he said, I had isolated myself from society in a narrow world of financial services, that is, making money out of money. It is soulless and so I had lost the connection. I may be talking about Krishnamurti, but I don’t have that connection,” Ramji says. “And it was true. I wasn’t a bad guy, but I was just not connected. This was what made me finally say, ‘Just do it.’” 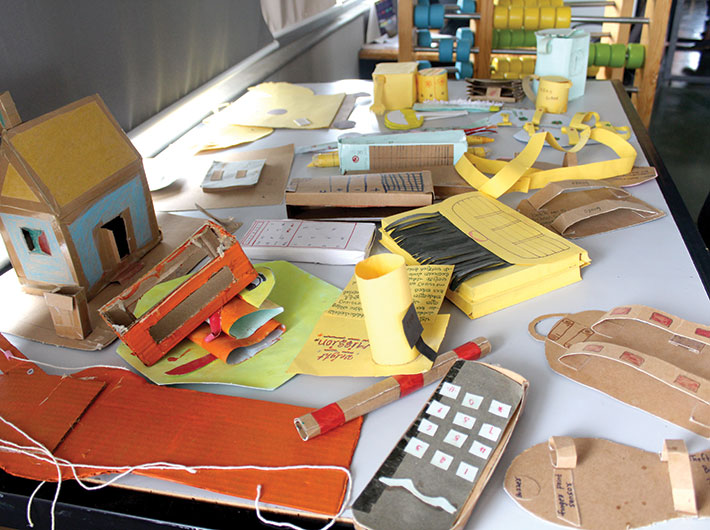