Digital India: Are we there yet?

Though local internet service providers have started making inroads into the remote-hilly areas, there is still a long way to go As one enters the State Senior Secondary School, Kalyana, in Kangra district – some 15 km from Dharamsala – one sees children from different age groups scattered all across the playground. In the basketball court, boys and girls, wearing maroon sweaters, sitting in separate rows are taking an exam. A short distance from there a class is underway for standard 6 students. Some children are attentive and some are just happy soaking up the winter sun. With not enough teachers and classrooms, the scenario is like any other government school.

But a small room on the first floor of the school presents a striking contrast to the picture outside. A ‘smart classroom’ having eight desktop computers equipped with the internet is offering a whole new experience. Students from standard 6 and above spend one-hour daily in this classroom learning the basics of computer and internet.
Flaunting their skills, some standard 12 students show a dummy database they have prepared. It lists the population of the state, district profile and infrastructure among other things. As soon as their teacher steps outside, a few quickly surf the internet, checking out latest Bollywood releases and browsing some e-commerce websites.
Thanks to the high-speed broadband connectivity, practicals and complex subjects are taught using YouTube at the school. “Life-saving activities like heart pumping during a cardiac arrest can’t be taught theoretically. It has to be demonstrated. The internet makes this possible,” says Alka, a vocational training teacher at the school.
For many students, the computer class is the only time when they get to browse the internet. Only a few lucky ones have family members with smartphones. “I was working on a school project on cancer. The textbook gives us a brief idea about it. But then there are so many types of cancer. There is so much information out there. To answer questions during the viva (verbal exam), you need to know more,” says Komal, a class 12 biology student and medical aspirant. Her father, who works in Chandigarh, sometimes buys monthly data packs when she requests; otherwise her only access to the internet is at the school.
But the internet story at this school was not always like this. In rural and remote areas, major telcos and internet service providers (ISPs) are apprehensive about the return on investment, and hence show very little interest in reaching out to the last mile. It is only Bharat Sanchar Nigam Limited (BSNL), a public sector unit, which has presence in these areas. It, however, fails to provide a reliable internet connection and majorly lacks in customer support.
The school in Kalyana, like other government institutions in the state, relied on BSNL for internet connection. “But whenever a problem occurred with the network, there was no way to get it resolved within a definite time period. Sometimes we did not have connectivity for six to seven days,” says Arun Kumar, a computer teacher at the school.
In such a scenario, new local ISPs have cropped up that use low-cost infrastructure and human resources to provide high-speed internet. Vayudoot is one such ISP (class C) licensed to provide internet to a couple of districts in HP. Air Jaldi, on the other hand, is a class A ISP and a bigger player with a licence to provide internet across several states. The two ISPs buy bandwidth from Airtel. They hook onto the telcos BTS, located in a relatively urban area, and transmit the net to customers within 30-40 km radius using radio or Wi-Fi frequency.
The local ISPs build a main tower which gets connectivity from the telco’s BTS and transmit it further. In case of an obstruction in the line of sight (from point of transmission to point of reception) they use networking devices, which act as both transmitter and receiver and hop the network to the other end.
To get a connection from these ISPs a consumer has to buy a receiver box or antenna, which may cost anywhere between Rs 4,000 to Rs 6,000. In some cases the cost may include the price of a router, which creates a Wi-Fi zone at the client’s place; otherwise users have to pay an additional Rs 1,500.
The basic plan of most local ISPs start from Rs 500, in which users get 1Mbps to 2Mbps bandwidth ‘unlimited data’, capped around 10-20Gb. 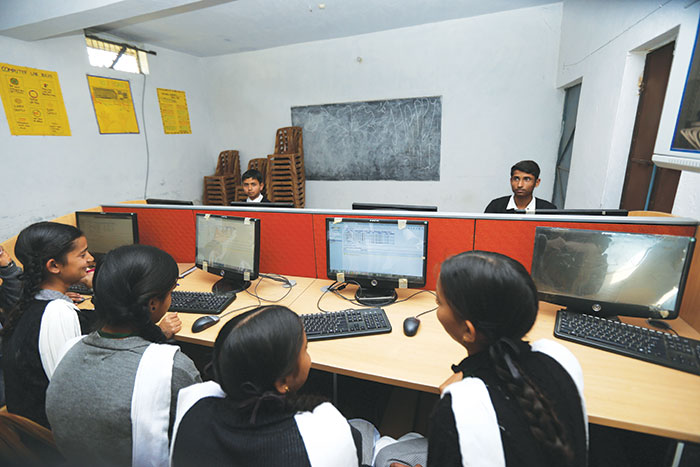 For the past six months the school in Kalyana has been using Vayudoot services and there has been no looking back. The school pays Rs 900 a month for 2 Mbps ‘unlimited data’ (till 50Gb), which is not only less costly than BSNL, but also more reliable.

But how do these local ISPs offer internet to far-flung areas when Airtel, Tata and other key ISPs can’t? It all depends on demand, supply and purchasing power of the consumer.
“Building a Wi-Fi network is not a difficult task. The problem, however, starts when you build a bigger network, adding more and more customers,” says Michael Gilguld, founder, Air Jaldi.
“The complexity grows exponentially. You need skilled human resource, and you need to retain them and it’s not an easy task. On top of it the maintenance is another major challenge,” he adds.
Both Air Jaldi and Vayudoot follow a clever strategy. Though they differ in their approaches, both train and recruit locals. They don’t hire engineering graduates to avoid higher salaries. They buy affordable networking equipment, usually imported from the US or China. The software for network management, which helps in ascertaining the health of the network and electronic equipment in place, are opensource and not proprietary.
The most important aspect is to ensure maximum uptime of the network. The troubleshooting in state-owned BSNL sometimes takes a week or even longer. The USP of Air Jaldi, Vayudoot or any another popular ISP operating in difficult terrain is providing a 24x7 customer support. The maximum time for troubleshooting is six hours, says Ravi, head, Kangra network, Air Jaldi, at the company’s McLeodganj headquarters.
Since Himachal is a hilly state, the air-to-air connectivity between houses and towers is less, but reaching the destination might first take tens of kilometres of ride and then a few kilometres hiking. As the local ISPs have employed local human resource, it is relatively easier for them to reach out to difficult areas and fix the network.
To expand their base in the region, both the companies are working on creating multiple Wi-Fi hotspots, which will provide cheaper and sometimes free internet. Currently, Air Jaldi provides hotspot services in eight different networks (that is, towns), with tariffs as low as Rs 5 for 100Mb.
“The hotspots are not in villages as they are not viable. For a hotspot, we need a minimum amount of people and demand,” says Gudgil of Air Jaldi.
Vayudoot too is exploring a few hotspot connectivity models. The idea is to get people to hook onto the internet. But these hotspots are in relatively urban areas – places having a critical mass of users which makes it viable for the ISP to provide the service.
Although they are extending the network coverage to remote areas and bringing more people online, the last mile access to the internet is still a challenge. A viable business model in rural areas is still a hypothesis. These ISPs cater to the middle income group population living in rural and inaccessible areas. Only those who can afford to spend Rs 5,000 to Rs 7,000 upfront can avail the service. How many customers in villages are willing to pay that much for an internet connection, is a question worth pondering.
pratap@governancenow.com
(The story appears in the April 1-15, 2017 issue of Governance Now)