In his book, RTI activist and former information commissioner, Shailesh Gandhi, asks for a national colloquium to save the RTI Act India’s Right to Information (RTI) Act is rated as the third best in the world as far as its provisions go but its rating for implementation and actual transparency ranks India at number 66.

“There is a growing tendency from those with power to misinterpret the RTI Act almost to a point where it does not really represent what the law says” writes RTI activist and former information commissioner, Shailesh Gandhi in his e-book, RTI: Authentic Interpretation of the Statute.


Co-authored by Pralhad Kachare, a bureaucrat who earlier headed RTI cell of Yashwantrao Chavan Academy of Development Administration (YASHADA), the book has deconstructed the meaning of the Act by “keeping the preamble in mind” without “references to any decisions or judgments; no proposals for changes in law and also no reference to international practices or laws in this exercise”. The book includes comments from former chief information commissioner Satyananda Mishra and international transparency expert, Toby Mendel.

Nearly half the RTI applications have to be made as most government departments violate the transparency law in fulfilling their duties under section 4 of the Act. If they gave the information suo moto as mandated in the law, citizens would not have to make half the applications. 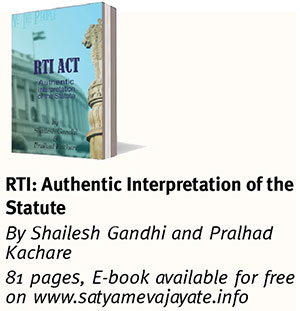 In his book Gandhi says, “Unfortunately inadequate attention is given to interpretations of the words of the law passed by Parliament. There are instances where the RTI Act has been grossly constricted by decisions in which a complete section of the statute is not even quoted completely… Orders or judgments which cannot be justified by the language of the statute cannot form the basis of law which would be followed as precedents… The Supreme Court can rule that a law or provision is ultra vires, but if it gives a ruling without considering the words of the law passed by Parliament this would be a ruling which would be ultra vires.”

Gandhi has asked for a national colloquium to discuss and debate the RTI Act as per its words and spirit.

“The Right to Information Act overrides all earlier acts or rules as far as giving information is concerned. The only exception will be if release of some information is prohibited in the Constitution.”

The book explains the meaning of the Act in its entirety; sections, clauses and sub-clauses in very simple and easy words. “A number of landmark Supreme Court judgments have recognised the Right to Information as part of the fundamental rights of citizens under Article 19(1) (a)... It is not a new right conferred on the citizens.”

‘Transparency in the process of governance acts as a check on arbitrariness and corruption... The legislative intent of the Right to Information Act, 2005 is clear when it admits the need for an informed citizenry, to contain corruption and to hold Governments and their instrumentalities accountable to the governed.” An uninformed citizenry cannot express or participate meaningfully in democratic governance” says Gandhi explaining the preamble of RTI Act, No. 22 of 2005 preamble.

Gandhi says that “rules cannot specify exempting any information beyond what is exempted under section 8 of the RTI Act” and adds that “establishments of the Parliament, Legislatures, Judiciary, President and the Governors have also been brought under the surveillance of the citizen”.
“Section 4 is the core and guiding framework of the RTI Act to ensure good governance. If public authorities implement this diligently it would not only reduce RTI queries but also dramatically improve their performance… The requirements of Section 4 are almost the same as for an ISO certification where entire public authority processes and practices have to be recorded.”

The aim of the book is to demystify the enabling RTI Act for people to understand it to ask and get information.

On section 11, the author says it is important to understand that the section is a procedure to allow an affected third party to voice his objections to releasing information which might cause harm to his interests. The PIO is expected to follow the procedure of section 11 when he intends to disclose any information or record. It is not an exemption. The exemptions for providing the information are only in section 8 and 9 as mentioned explicitly in section 7 (1). By implication and specifically in section 22, it has been clearly spelt out that this Act shall have effect notwithstanding anything inconsistent with it in any other law.

“The decisions of the commissions are not merely recommendatory but have to be followed as per law and have statutory force” says the author on explaining section 19 (7).” “Insertion of a non-obstante clause in section 22 of the Right to Information Act was a conscious choice of the Parliament to safeguard the citizens’ fundamental right to information from convoluted interpretations of other laws and rules adopted by public authorities to deny information.”

In the concluding pages commenting on section 23, Gandhi again points, “This clearly bars any court from hearing an appeal against any right to information order issued by a commission. The final appellate authority in RTI is the Commission. Since Parliament has not provided for appeals in right to information beyond the commissions, when a court takes a challenge to an order of the Commission it should justify how the matter falls under its writ jurisdiction. He further explains, “There are five kinds of writs and the only writ which can be invoked against the orders of the information commission is a Writ of Certiorari. Unfortunately many writs are entertained by courts from public authorities which are clearly appeals.”
“The aim of parliament to get citizens to use RTI to curb corruption is evident from the fact that even security and intelligence agencies have to provide information in case of allegation of corruption” he says on section 24(1).

The end of the e-book includes an RTI competition with a maximum prize of Rs 25,000 aimed at creating a database of people’s analysis on the large number of decisions on the RTI Act, as well as generating awareness and a deeper understanding of the Act.