Suresh Nair and his team working on a mural in Varanasi

Nature and its elements have taken the place where there was once filth and heaps of garbage.

Initiating the concept of public art  in the holy town of Varanasi, visual arts students from Banaras Hindu University (BHU) led by their professor Suresh K Nair have painted beautiful wall murals on shabby walls across the temple town. 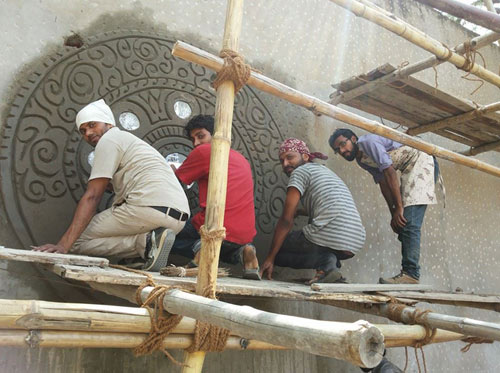 “Public art is permanent and accessible to everyone. People who pass by will see it. It’s a direct mode of conversation between artists and the people. We are using this to create awareness towards environment and cleanliness,” says Nair.

“We have named it the ‘Earth project’. Unlike conventional murals depicting mythological tales and legends, these under the ‘Earth Project’ have a symbolic resemblance to nature and its elements.” 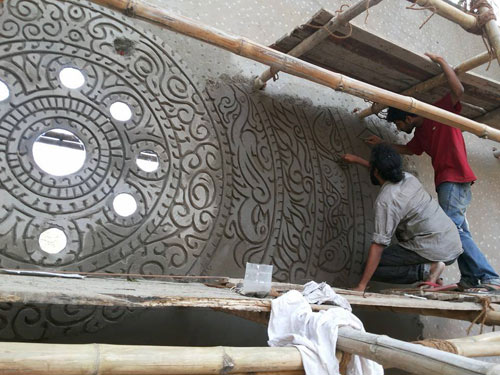 The group started from a private school adjacent to the university campus. A portion of the school ground was muddy and had become a garbage dump. The school administration got in touch with Nair and his team, and they decided to transform the area.

The artists decided to erect a wall and paint murals representing five elements of nature. Symbols like fish, birds, human body and mirror to make it visually appealing and add a sense of playfulness. The green coloured 20 ft x 40 ft wall mural is the first ecology-based work in the country.

The idea behind this was to impart basic awareness and knowledge about nature and increase sensibility towards it among the school students.  From then onwards, the team is working towards identifying and transforming filthy serpentine lanes and roads in the old city areas. 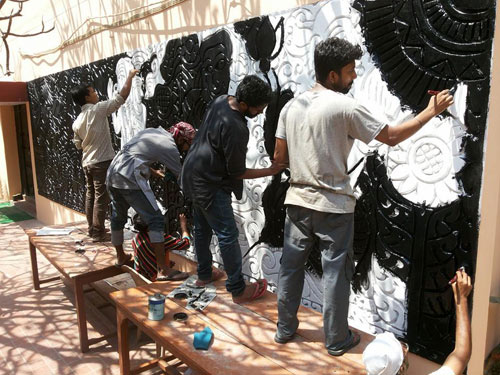 “We are trying to involve locals into this work. If they will participate, they will have a sense of ownership and it will be easier to convince others as well,” Nair informed.  Communities, organisations, residents of several colonies have in fact identified their own places and approached the team to prepare wall murals.

Apart from painting, the team is making sure that the area remains clean and keeping dust bins and billboards to maintain the place and art works.

These artist’s have not confined their works to Varanasi only. The team has made a similar wall mural at a government primary school premises in Puducherry. Another mural depicting the story of partition  has been erected near Wagah Border.