How women in Rajasthan villages are playing political roles

Women in Rajasthan villages are not only contesting elections, but also taking on other political roles. They talk of development and empowerment There is a rise of women leaders at the grassroots level in Rajasthan villages. The panchayati raj department is still collating data to get the precise picture of women’s political presence. In 2010, there were 4,824 women sarpanches in Rajasthan, including 465 on unreserved seats. A 3-4 percent rise is estimated in the number of unreserved seats won by women as sarpanches and ward panchs this time.

Defying all odds, women have now taken the role of booth agents, guaranteers, publicity leaders as well as village sarpanches and are leaving no stone unturned in working for the development of women and villages like their male counterparts.

“I announced ‘no entry’ for my husband to the first meeting of panchayat members. After all, people have elected us as their representatives, not our men,” says Madhuri Devi, the young sarpanch of Dasor panchayat in Jalore tehsil of Rajasthan.

Madhuri came to Rajasthan from Maharashtra after her love marriage. When she saw there was no water, no education, no hygiene in the village, child marriage was common and no one really cared about anything, she decided to do her bit. She started attending village meetings with her mother-in-law and helping her husband in community works. When panchayat elections were round the corner, she decided to contest to serve people better. When she announced her decision, her opponent threw a feast (called ‘haka’) for the whole village to lure all villagers to his support. Madhuri had neither money nor inclination to match his move, but what she came up with surprised many.

She went to the feast, and poured her heart out before the entire village. With folded hands she told them, “I can’t throw such a big party for you, but what I can do is ensure education for your children and development for our village.” She won by a good margin. Now, the young woman has dedicated herself to the cause of development.

This year, many potential women leaders could not contest panchayat elections in Rajasthan. One, because of new eligibility criteria – they must have studied up to Class 8 and not have more than two children. Two, reorganisation of panchayats. Yet, beating all odds, many women have been elected or re-elected. Some were reluctant, realising the demands and pressures of delivering results despite limited powers. But their credibility, earned out of continuous involvement in community issues, paved the way for them. Yet others contested only to keep out the bad elements.

It is remarkable how young women leaders at grassroots level shun dirty politics and try to bring about change. Their key concerns are education and water in this drought-prone state. Like Madhuri, there have been many who have made it clear that the elected representatives are the sole guardians of public funds and these women have ridden their good work to get elected for the second or third time.

Rajasthan had fifth panchayat elections this January-February and the participation of women has improved. These women leaders are full of hope and aspirations, and their priorities are clear. Those who contested but lost have also not lost their sense of responsibility as leaders. 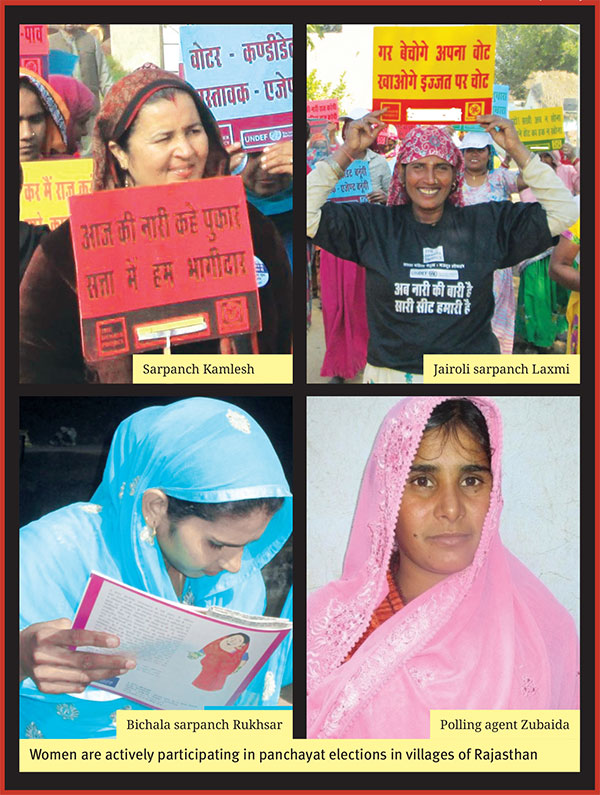 Gawari Devi became self-confident after her stint as a sarpanch, and contested assembly elections this year but lost. However, she is not disheartened and instead contested and won the ward panch election from Revdar in Sirohi. She says categorically that more than anything else, local elections are about making villages better and also about participation of women in decision-making. Similarly, Sarmee Bai, who had got liquor shops closed, old-age and widow pensions released and worked for improvement of anganwadis and schooling, lost sarpanch elections from Nichalagarh panchayat, Abu Road, Sirohi. “I was offered money to withdraw my candidature and clear the way for a powerful candidate. I lost the seat but not the will to serve people.” She is proud that she worked hard to help Nichalagarh earn the tag of an ‘ideal panchayat’. “These works hurt the interests of powerful people, so they ousted me. But I will keep working for real issues,” she says.

There have been first-timers also. Pinki, a young sarpanch from Vanasthali village panchayat, worries about roads and toilets while Rukhsaar of Bichala panchayat from Alwar district is a young Muslim face. Rukhsaar’s journey was no less bumpy. She is vocal about there being only 200 Muslim votes. “But I won with the support of the other community with a margin of 137 votes. I wish to work hard for the education of Muslim girls and all other issues my people have voted me for,” says a proud Rukhsaar.

Neeru from Rampur Mewara panchayat in Doongarpur district wishes to offer employment to single women, build toilets and make use of the Pradhan Mantri Adarsh Gram Yojana to transform her village.

While there are women who have come forward to take up leadership of the entire village, a majority of women still do not participate in panchayat meetings and this is not a good trend, says Santosh Kanwar, sarpanch of Toomli-ka-Baas panchayat, Jaipur. “If they will not speak up, who will care for them? When it comes to the girl child’s education or lack of toilets, they need to feel enraged and get engaged. I will put them through training for self-employment and hope things move a bit.”

The rise of women leaders at the grassroots level was also supported by an experiment undertaken by the Hunger Project, which as part of the systematic voter education and electoral participation (SVEEP) programme, targeted violence and corruption in elections and promoted inclusion of women at every level. It encouraged women to take up different roles in panchayat elections apart from contesting for political posts.

Zubaida from Sarheta panchayat became a polling booth agent for the woman sarpanch candidate in her village – something that hadn’t been heard of earlier in a region where women are confined to the household and farm work.

Apart from taking up leadership roles, women have also realised the power of their votes. Women voters have played a significant part in the Rajasthan assembly elections with 75.52 percent turnout – 1 percent ahead of male voters. The parliamentary elections also witnessed a similar trend. So, it did not come as a surprise when they actively participated in panchayat elections.

Efforts were also made to encourage them to fight for seats other than those reserved for women. They won 52-53 percent of the total seats in the elections for 9,862 panchayats (not counting 13 which went unrepresented and 19 where elections were not held for various reasons).