In rags lay his raison d’être

Chance confrontations with rawness of reality changed his perception of life; he chose to make the most of it for others Even for a hillman, a winter night in the high-altitude Uttarkashi district can be ruthlessly cold. Biting, shivering, bone-chilling — all adjectives will fail here; cold will not. Listlessly floating flakes of white stealthily feed on the hapless left out in the open. Life is snuffed out of them in irregular deep cold breaths yearning for a touch of warmth. October 22, 1991 was one such night. Cold was not the only cruelty that night. A couple of days ago, the region, the Tehri region of Garhwal Himalayas, was struck by a devastating earthquake. Ninety thousand houses were damaged, 768 people lost their lives and 5,000 people were injured in addition to the loss of 3,000 cattle heads.

Anshu Gupta, then in his early 20s, had bunked his classes in Delhi to be there, as he himself says now, “to see and do something”. Amid a trail of destruction, the lens of Gupta’s camera suddenly caught an old man who wore a gunnysack and tattered pants. With hands which shook badly, he held a letter which had “Please donate a blanket” written on it in bold. Click of a button later, the flash of Gupta’s camera pushed everything into a moment of darkness — a moment which allowed him time to reflect on the importance of clothes we wear so casually, a moment in which nothing but the old man with a pallid face and aspen-like hands occupied his mind, a moment in which he calculated the chances of his survival on that cold night or the next one, a moment which was to define his entire life.

Sometime later, Gupta bumped into the rawness of reality a second time while on a shoot in the Daryaganj area of Old Delhi. This time his lens zoomed in on a man with a handcart, who collected unclaimed bodies for the Delhi police. During his week-long stay with Habib, as the man was called, Gupta learned from him how winter never claimed any of the dead he picked up on winter mornings — lack of clothing killed them instead. Habib’s six-year-old daughter shook his conscience when she revealed to him that she slept at times with the dead to avoid cold. “Besides, they never disturb,” she said casually. 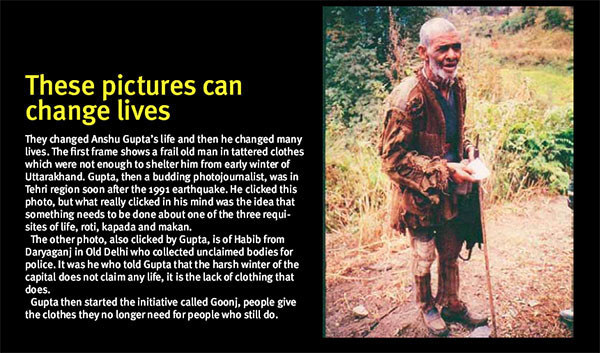 It was against this backdrop that Anshu Gupta along with wife Meenakshi and friend Ajay Sharma formed Goonj in 1999. Beginning with 67 items of clothing from his own closet to initiate Vastradaan, Goonj has been sending 1,000 tons of material, including clothes, utensils, school material, footwear, old furniture, doors, windows annually to rural areas. It has built up a network in 21 states, has over 250 partner groups in grassroots organisations and has its own offices as dropping/processing centres in Delhi, Mumbai, Chennai, Kolkata, Hyderabad, Bangalore, Jalandhar, Saharsa (Bihar) and Bhubaneswar.

But the magic is in his mantra: “It is not the receiver that is blessed, but it is the giver. Be thankful that you are allowed to exercise your power of benevolence and mercy in the world, and thus become pure and perfect.”

“We do not collect donations. Because we believe nobody donates. If you have excess clothing that you do not use, you walk into our dropping centres and deposit,” Gupta says with a straight face, while sitting in his Sarita Vihar office in Delhi. That same approach is adopted at the other end too. “People in rural areas have a lot of dignity. You cannot challenge that dignity by offering them clothes,” he says. Goonj follows the ‘clothe for work’ model where clothes are given as an incentive for carrying out development works in villages.

A few minutes away from Goonj’s office is its processing centre where members of team Goonj diligently sort through piles of clothes collected from all over the country. “We carefully search for any wear or tear in the clothes. We stitch the damaged clothes before we pack them off to the rural areas,” explains Uttam Kumar Sinha of team Goonj. Everything in the processing facility is done with utmost care. Gupta makes sure nothing goes to waste. The NGO receives contributions in the form of clothes, books, jewellery, one-side-used papers which are converted into copies. Scraps of unusable cloths are converted into quilts. Over-sized clothing is used to make accessories like bags and belts and sold to raise money. Cotton clothes are separated from the rest, cleansed properly and made into sanitary napkins. Even the pins and staples received along with unused papers are sold to scrap dealers.

“But the toughest thing to fight as we go on with our work is people’s mindset. With what right do we use the word ‘donate’? We never donate, actually we discard. We need to be thankful to the person who uses our second-hand material as that person really extends the lifecycle of something on which we have spent our hard-earned money and saves it from going to landfill site. But sadly, people’s attitude takes precedence over reason. At times, we receive blood-soaked cloths and torn shoes. This is insensitive,” he says. During a seminar that Gupta attended, he recalls, his wife was accosted by a woman “who wanted to force her old curtains on us because she believed our kids might need them”.

In 2007 Goonj’s sanitary napkin project ‘Not just a piece of cloth’ won the World Bank’s global development marketplace award. “In 2004-05, there was no information on sanitary napkins on Google. This basic hygiene did not find a mention in discussions. In Indian society, menstruation is a taboo and cannot be openly discussed,” Gupta says.

“Even in the worst days of Goonj, we had the courage to say no. The easiest thing to do was to take money for popular subjects instead of talking sanitary napkins. Some people would tell me that ‘there is a project in AIDS, why don’t you take it?’,” he says.

“Women use the dirtiest piece of cloth, wash it and find it difficult to dry it. Washing itself is a problem as most hand pumps in the villages are located in public places. In slums, they dry it behind the door. Two to three women in a family share the same cloth and sometimes they even share it with their neighbours. In Sunderbans, I met a woman who had been using the same cloth over a year,” he adds. 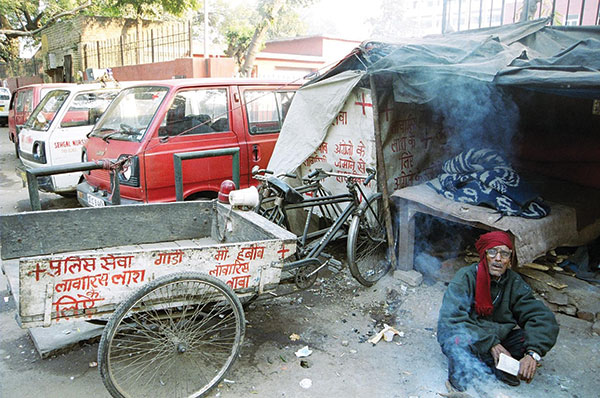 “The problem with us is that we decide what problems people face, instead of asking them. How many funding agencies spend time in the villages to find out what problems the villagers have?” enquires Gupta, who travels 15 days a month to understand villages better,  build up capacities of people and spread the work as well as the idea.

“We find hope from the fact that we are working on something decided by local people. There are scores of girls in  villages who can’t go to school because there is no place to change when they menstruate. Most development stories I see around are based on numbers instead of assessing the ground-level impact,” Gupta says.

Assam is grappling with a flood situation and Gupta and his team is working overnight to ready its first relief dispatch to the victims. “I see many people rushing in to make contributions of clothes immediately after a disaster like floods or earthquakes. But in areas like Kashmir, don’t they have snowfall or sub-zero temperatures? Do disasters matter for homeless people?” Contributions should be regular and methodical, he insists.

“No discipline is followed by people while donating clothes. Saris and dhotis are of no use in an orphanage, but people will not think twice before making contributions,” he says. Goonj hosts campaigns to make people aware of the issue. However, handling logistics and the volume of contributions received is the biggest challenge for team Goonj, he says. But despite glitches which he accepts as part of the game, his has been a journey of satisfaction. “I don’t collect clothes for somebody I know. Neither do I get them from somebody I know. Goonj is a tool, it is an idea, an effort. And I do it all for that old man in the gunnysack on that cold winter night.”