Now on stands: Your drug may be spurious

The business of spurious drugs in India Indu Gilra, a retired teacher in her seventies living in Indirapuram, Ghaziabad in the national capital region (NCR), would often pop a tablet of Combiflam at the slightest hint of body ache. Since it’s an over-the-counter medicine, she could purchase it anywhere and it had always worked. One day, however, the pain refused to subside hours after taking the pill. Worried, she doubled her dose and yet the pain wouldn’t budge.

“I kept wondering if I had contracted some serious disease,” she says. She also wondered if there was something wrong with the medicine – she had bought it from a chemist’s shop which had opened recently in her middle-class neighbourhood. Maybe she should change the shop and not the medicine, she thought. Indu’s pain was gone after buying a strip of the same medicine from another pharmacist.
“I could make out that I had been popping spurious drugs all these days, but what could I do?”

Upset at being cheated she now decided to spread the word about her experience and at least expose the pharmacist before others. Her friend and neighbour Jaya Bhat, 74, was suffering from hypothyroidism – a condition in which a small gland located deep inside the neck region becomes sluggish and does not produce enough thyroxin hormone that plays a key role in working of the human body. For years, Jaya had been popping a 50 mg pill of Thyroxin in the morning to allow her body to make up for the missing hormone. However, of late, she had been feeling very uncomfortable, suffering palpitation, feeling extreme cold even in the peak of Delhi summer and her body bloating.

Fearing that her thyroid condition might have worsened, she got her blood tested. The doctor saw the report of the clinical test and told her that the gland had become even more sluggish and now she needed to double the dose to compensate for ever lower levels of thyroxin.
One day when the neighbours met during a routine walk they exchanged notes on health. Indu let out her rant against the new chemist. “I was lucky to have met Indu that day,” recalls Jaya, a homemaker, who too realised why she was continuing to suffer even after doubling her dose of medicine. She too changed her druggist and heaved a sigh of relief.

She has since returned to the 50-mg pill regime. “Only last week I got my blood tested for thyroxin and the result was normal,” she says.
The two women not only wasted money and suffered pain and anxiety but also consumed chemicals which could have major side effects on their health. Unfortunately, Indu and Jaya live in a region – NCR Delhi – which sees a Rs 300 crore substandard drugs trade each year. According to the industry body Associated Chambers of Commerce of India (ASSOCHAM), a third of the drugs sold in this region comprising the capital and the four townships around it – Noida, Ghaziabad, Faridabad and Gurgaon, with a total population of 4.6 crore – are substandard. The report is based on a survey it carried out in 2006-07.

Read full story about the business of spurious drugs in India in May 1-15, 2016 issue 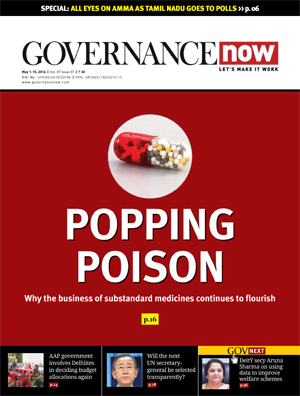