The soothing balm of ayurveda

After a pioneering initiative by a panchayat, ayurveda doctors redefine palliative care in Kerala, bringing relief to patients written off by modern medicine Susan, 70, had a painful ulcer on the dorsal side of her foot. The ulcer was affecting her everyday routine.  She could barely stand or walk. A resident of Mullurkara panchayat in Thrissur district, she was being attended by the palliative care wing of the local primary health centre (PHC) for the past three years. The nurses used to dress her ulcer twice a month. But it never got healed.

In December, her case was taken up by a team of ayurveda doctors under the Snehadhara project, set up in the Mullurkara panchayat.
Team member Dr Shabna Krishnan began visiting Susan every month. She provided her herbal medicines like triphala to wash her wounds with. By February, her ulcer was gone.

Susan is now able to walk freely, says Dr Sheeja Menon, the doctor in charge of the ayurveda dispensary at the panchayat.
In 2008, Kerala became the first state in the country to offer palliative care to needy patients. On June 15, 2012, Maharashtra also announced a palliative care policy, making it the second state in the country to do so. As per the World Health Organisation, palliative care is an approach that improves the quality of life of patients who are bed-ridden or suffering terminal illnesses or complications related to old age or disability. To ‘palliate’ is to reduce pain and not to cure the disease itself. 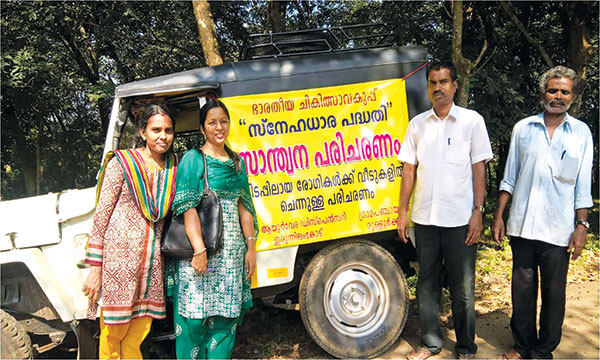 In December 2015, the Kerala government roped in ayurveda doctors to offer palliative care services to patients suffering from long-term illnesses who required home visits. Palliative care is already being provided by primary health centres as part of the state’s pain and palliative care policy (see box).

Project Snehadhara (palliative care offered under Indian system of medicine) was piloted in two to three panchayats in just three districts of the state, namely Thrissur, Thiruvananthapuram and Kasargod.

Dr Menon, who along with Dr Krishnan, is in the Snehadhara team for the Mullurkara panchayat in Thrissur, says that they visit patients thrice a week. “Each day we are able to visit homes of at least six patients,” she says.

But how do they find their patients? Dr Menon explains that earlier they used to attend palliative care home visits of the allopathic PHCs. “So we know a lot of cases and we intervene where we feel we can make a difference. The patients also make requests for ayurvedic treatment in the palliative care unit,” she says. 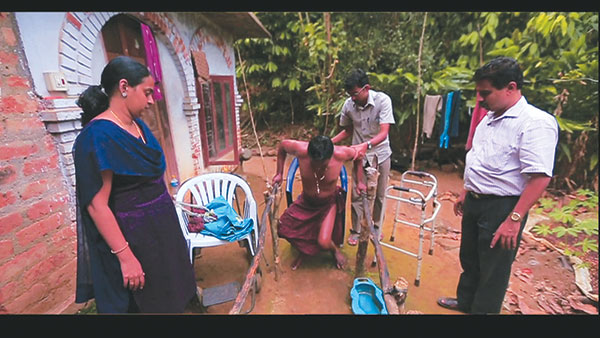 One of the areas where there has been immediate relief is in the case of bed sores suffered by bedridden patients.

“Patients who are bedridden often get bed sores or pressure sores. These can actually worsen the condition of patients and even prove fatal for them. We could heal many patients with bed sores using ayurveda,” says Dr Menon.

Rukmini Amma, a 75-year-old diabetic, suffers from obesity and weighs about 85 kg. You can’t enter her room as the place stinks of urine. Her daughter takes good care of her and has installed a closet in her room itself. But she refuses to use it as her sores and obesity limits her mobility.

“Her sores had turned into ulcers between and under her buttocks”, recalls Dr Menon. “We had first met her during our visits with palliative care doctors from the PHC. We decided to introduce ayurvedic treatment for her. Her daughter was called to the dispensary. She was asked to boil triphala in water and wash her wounds regularly with it. Some other medicines were also given under the palliative care plan. Within two to three weeks she was totally healed,” says Dr Menon.

“She was of course asked to continue with allopathic medicines for diabetes,” she adds.

The story of Abida and Ali from Kannampara village in Mullurkara also had a positive ending thanks to ayurvedic medicines.

Working as daily wage labourers with the railways, the couple suffered from a stroke, which paralysed one side of their body. Their condition was pathetic, especially Ali’s. He had a pot belly and suffered from constipation. He could relieve himself just twice a week and that too with the aid of medicines. 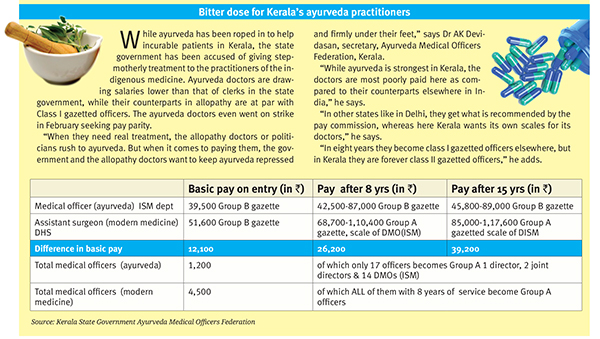 “When he was included in our list of patients, we gave him medicines for bowels and he was soon having daily motions. His stomach [pot belly] also vanished. We go once a month, but he keeps asking for us,” says Dr Sheeja, adding that the couple stay next to the house of the attendant who is in the Snehadhara team.

“They are well off so we have advised them to admit themselves as in-patient and take further treatment. We have also prescribed medicines to them which they can buy since our free medicines are meant only for the very poor,” she says.

Dr Sheela Karlam, district medical officer (DMO), Thrissur Indian School of Medicine (Ayurveda), says that the Snehadhara has evolved from a project piloted about two years ago in Idukki district panchayat. “That was a great success and in 2015 the government for the first time included it in the regular plan funded schemes,” she adds.

“The government, however, confined it to three districts and the DMOs were asked to select panchayats where it would be used most effectively. I decided to confine the project in this district to two panchayats,” she recalls.

Dr Geeta, a medical officer who does home visits in Avinissery panchayat in Thrissur district, says that out of 116 patients who have registered themselves for Snehadhara, she has been able to visit the homes of 72 since December when the scheme was started. While palliative care is usually associated with diseases like cancer, only 14 of these 116 were cancer patients.

She gives the instance of Rani who was recovering after a surgery for the tongue cancer. Post surgery she had lost her appetite and weighed just 36 kg. She wanted help from the ayurveda doctors. Fortunately, she was able to walk and didn’t need home care. So she came to the clinic and took medicines each month. In due course of two months she recovered her appetite and gained more than four kilos, says Dr Geeta.

Dr M Suresh, medical officer, who is part of the earliest ayurveda palliative care project started by the Idukki block panchayat in 2013, says that it was purely a panchayat initiative. It is still continuing in 25 panchayats, including two tribal areas.

A doctor at the block level is dedicated only for home visits here, he says. Since many areas are not accessible by road, the doctor and health workers often have to go by foot to reach the homes of patients, adds Dr Suresh.

The Kerala government is already in the election mode and the next government is expected to be sworn in in May. But the health department feels that the efforts to offer services of the different streams of medicine in palliative care would go on irrespective of the election results.

“The scheme will continue irrespective of any change in government,” says the joint director of the Indian System of Medicine VN Gopinathan in Thiruvananthapuram.

It started as a project of a block panchayat in Idukki. But it was so successful that it was decided to allocate plan funds for it in three districts, he says. Now there will be no going back, he adds.