For many, the term ‘AI’ still evokes the image of either a Terminator-type robot or a disembodied, talking computer many times smarter than humans. And more often than not, the human race invariably needs to be rescued from their clutches, preferably by a bunch of easy-on-the-eyes Hollywood stars. Fortunately, the reality is considerably less dramatic and more benign. A conscious computer or super-intelligent robot is what experts refer to as Artificial General Intelligence or Singularity and we are still about 40 to 50 years away from that phenomenon.

However, narrow AI is already in our midst – in our smart phones talking to us (Siri, Cortana), giving us recommendations (Amazon and Netflix), giving financial advice (Schwab’s Intelligent Portfolio) and winning game shows (IBM’s Watson). The common thread among all these different activities is the fact that they are replicating what a reasonably smart human being can do – sensing, reasoning and acting. Put simply, AI is the ability of machines to perform functions similar to that of a human mind. It is a sub-field of computer science and is aimed at developing a set of computational technologies that are capable of doing things that are done by people.

There is no doubt that AI could be harnessed for the benefit of humanity from healthcare to climate change and humanitarian crises. But there are many risks and challenges that need to be considered and mitigated before embracing it wholly.

The AI start-up ecosystem in India has included a few truly innovative experiments. For instance, GreyOrange designs and develops warehouse automation and technology solutions and offers products like Butler, a fleet of mobile robots for moving materials in the warehouse more efficiently, Sorter, a fully automated sortation system to sort and divert outbound packets and GreyMatter, a software platform for end-to-end intelligent order fulfilment.

Similarly, NetraDyne is a machine learning and deep learning company that focuses on computer vision and its applications to automotive and unmanned aerial systems navigation and collision avoidance. It also works on automated analysis of visual data collected by drones for verticals ranging from agriculture to site inspections.

Bengaluru-based start-up CropIn, uses AI to maximise per-acre value in agriculture. With its ‘smartfarm’ solution it is possible to geo-tag plots of farm-land to find the actual plot area. It also helps in remote sensing and weather advisory and scheduling and monitoring farm activities for complete traceability.

The police in Punjab and Uttar Pradesh are using facial recognition systems with options like face search and text search. PAIS has a database with more than 100,000 records of criminals housed in jails across Punjab. Trinetra, a product of Gurgaon-based start-up Aqu that the UP Police is now using, has a database has approximately 5 lakh criminals.

Scarcity of big data: The most powerful AI machines are the ones that are trained on supervised learning. This training requires labelled data – data that is organised to make it ingestible for machines to learn. However, the availability of well labelled, feature-rich local data sets is extremely limited in India. A few government bodies make some data sets available but they are limited in number and scope.

Lack of clean data: For data to be used to train AI, it needs to be recorded in consistent, machine-readable formats for accuracy and to ensure that it does not present the algorithms with unintended biases. This is a particularly big problem in India as a lot of its data is not digitised or is in unstructured format.

Data localisation: The act of storing data on any device that is physically present within the borders of a specific country where the data was generated is known as data localisation. Free flow of digital data, especially data which could impact government operations or operations in a region, is restricted by some governments for security concerns. However, some experts oppose the move as it is seen as hindering the flexibility of the internet and adding to the cost for global companies who have to maintain multiple local data centres.

Limited Technical Capacity: AI algorithms are usually very complex, often requiring thousands of calculations – sometimes even more – computed every second. With the development of cloud and distributed processing over the past decade, it became possible to process big data algorithms, ushering in the current age of AI-powered data analytics. However, as demand for more powerful processors increases, bottlenecks will start emerging, making it difficult for enterprises to adopt the technology.

Impact on jobs: The rapid advance in AI technology has sparked concerns about how it would impact employment. There is fear that as AI improves, it could supplant workers creating a pool of unemployable humans who cannot compete economically with machines. While there is no definitive way to predict the scale of job losses or quantify the new jobs that will be created, various studies have attempted to address this question with varying results. For instance, the study by Frey and Osborne predicted that some functions within 47 per cent of jobs will be automated. A report on the OECD countries put the share of jobs potentially lost to computerisation at nine percent. The World Economic Forum’s 2018 report, however, predicts that a net of 58 million new jobs would be created due to the disruption caused by AI. Most studies1 consistently predict that the least well-off will suffer the most from automation. But a new study by Brookings, published in 2019, gives a different prediction. While stating that almost all occupations can be impacted by AI, it shows through a comparative textual analysis of text of AI patents and the text of job descriptions that it would affect better paid, white-collar occupations such as market research analysts, sales managers, computer programmers and personal financial advisors more than low paying, hands-on services such as personal care, food preparation or health care.2

Today’s AI suffers from a number of novel unresolved vulnerabilities. These include data poisoning attacks (introducing training data that causes a learning system to make mistakes), adversarial examples (inputs designed to be misclassified by machine learning systems), and the exploitation of flaws in the design of autonomous systems’ goals. They demonstrate that while AI systems can exceed human performance in many ways, they can also fail in ways that a human never would.

Among the threats to political security, the key one comes from the state. The state can use automated surveillance platforms to suppress dissent.

AI can also mislead and confuse. For example, creation of highly realistic videos showing inflammatory comments by influencers that they never actually made. Automated, hyper-personalised disinformation campaigns can be launched using AI. Individuals can be targeted in swing districts with personalised messages in order to affect their voting behaviour.

In addition to these threats which have a malicious intent, there are threats which are unintentional or system related. Take, for instance, algorithmic bias. Algorithmic bias occurs when a computer system reflects the implicit values of the humans who created it. While generally the blame for bias in AI is put on the training data, the reality is bias can creep in long before the data is collected as well as many other stages of the deep learning process – during the framing of the problem, collecting data, and preparing the data. For example, biases creep in during hiring decisions as Amazon found out that its internal recruiting tool was dismissing female candidates because it was trained on historical hiring decisions which favoured males over females.3

V. Towards a ‘Responsible’ AI

The need for ethics and laws to regulate AI is seen as critical for it to gain the confidence of the public. If AI leads to privacy violations, bias, or malicious use, or if much of the world comes to blame it for exacerbating inequality, the potential of AI would remain unfulfilled. Establishing confidence in its abilities to do good, and at the same time, addressing misuses, will be crucial.

This has prompted many countries to take pro-active steps to frame policies to regulate AI. At the same time, tech giants such as Google, Intel, and Facebook have declared ethical standards they plan to adhere to. India has also woken up to the need to regulate AI and has taken some small steps in that direction.

We need to keep in mind that AI is a tool that can be applied with good or ill intent. Therefore, it is important to think of the ethical implications of AI while designing it. Similarly, we need to find a balance between regulations that protect citizens while also not impeding technological breakthroughs. 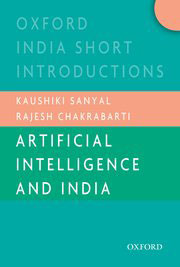 This article is based on excerpts from the book ‘Artificial Intelligence and India’ (Oxford India Short Introductions), by Kaushiki Sanyal and Rajesh Chakrabarti, Oxford University Press, 2020.
https://www.amazon.in/Artificial-Intelligence-India-Oxford-Introductions-ebook/dp/B08B43M548