The scrapping of Rs 500 and Rs 1,000 denomination currency notes has adversely impacted villagers who are now finding it difficult to earn their living. Murugammal, 45, has an unhealthy pale appearance. She has no money to go and get her further medical tests done. She goes inside her thatched hut to fetch an X-ray report. “I just had Rs 1,000, which I had spent on getting X-ray done from medical college situated more than 20 km from my village. The doctor advised me to get further tests done as he suspected some serious illness, but I have no cash even to take a shared auto or a bus to go to the hospital,” laments Murugammal.

People are struggling to draw cash in Puliyur Kandigai village to meet daily requirements due to inaccessibility of ATMs and banks. Most of the times the ATMs run dry. The village is about 40 km from the state capital in Thiruvallur district.
As a result of demonitisation, Murugammal’s daily life is hit hard. Her husband Suresh is an agricultural worker. He gets Rs 300 as wages. But daily income is not ensured. The only son of the couple passed away at the age of 30. Now Murugammal and Suresh are shouldering the responsibility of bringing up their grand-daughter, Sowndariya, who studies in class II in a nearby government school.
“With all this responsibility, what can we do without cash,” asks Murugammal.
These villagers have to travel 5 km to reach the closest ATM, which nowadays is mostly out of service.
Thirty-eight-year-old Dhanalakshmi of nearby Ayathur village is a member of milk producers association. She is managing her home by borrowing money from friends. Many of the members of the association have not got their payment yet. “The secretary of our association could not withdraw sufficient cash from the bank due to a limit on withdrawal so we are unable to get payment. Today I have no cash at all,” she says.
Dhanalakshmi is not the only one who is having lots of problems.  Allamelu, 42, and Latha, 33, who are daily wage earners are struggling to exchange Rs 500 notes. They are still getting wages in demonitised denomination. 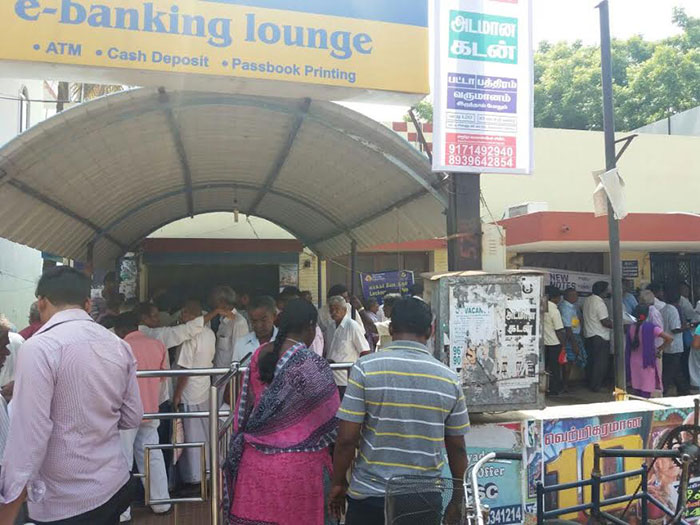 Unwilling to stand in serpentine queues at banks, Sulochna, 26, chooses to buy her daily needs on credit. “If I go to the bank and stand in a long queue, I won’t be able to go to work and will lose my daily wage for the day,” she says.
Fortyfive-year-old Ashok of Thiruvallur district goes from village to village on his two-wheeler to sell red chilies and tamarind. Given the current situation, he is buying chilies and tamarind on credit from Koyambedu market, which is close to 40 km from where he stays. He says as cash has become scarce, sale of his items have gone down from Rs 2,000 per day to around Rs 500.
Perumal, 32, who runs a grocery shop in Ayathur village, says most people are purchasing their daily needs on credit. “Even I was forced to buy goods worth Rs 24,000 on credit, in bulk, for my grocery outlet,” he says.
The lament is similar from fish seller Kuppana, 62, of nearby Gajerikulam village. For the past one week he has been carrying two new notes of Rs 2,000, but there are no takers for it. The rural branch of a nationalized bank is located almost 7 km from the village.
Bank staff are apprehensive of a law and order crises if notes in small denomination do not arrive soon.
A bank manager, who asked not to be named, shows a bundle of soiled Rs 100 notes. “We are getting bundles and bundles of soiled notes from RBI. We have no option other than to recirculate these notes as there is no cash in the bank,” he says.
According to the branch manager, as of now Rs 500 new notes have not come in banks in Chennai, whereas in other metros Rs 500 new currency notes are arriving. “Once Rs 500 new notes comes in the market, things would be manageable as exchanging Rs 500 would be easier than exchanging Rs 2,000,” he adds.