A century-old swashbuckling page-turner is an ‘amazing find’

Young Parsi’s World War I memoir, translated from Gujarati, is a rollicking read The First World War: Adventures of Nariman Karkaria
Translated by Murali Ranganathan
With a Foreword by Amitav Ghosh

With an explosive growth in publishing in India over the last decade or so, there are more new releases than new public issues in the stock market of the early 1990s – several a week. Like the companies issuing new shares back then, most books are not destined to be in currency beyond a year. But there were gems even back then. Every once in a while, a book comes out that reminds readers why they are addicted to reading in the first place. In recent weeks, ‘The First World War: Adventures of Nariman Karkaria’ is that book.

It’s not a new work. Nariman Karkaria (1894–1949) wrote it in Gujarati about a century ago. But his ‘Rangbhoomi par Rakhad’ – the only First World War account written by an Indian to have been discovered thus far – is largely forgotten in his native language too. 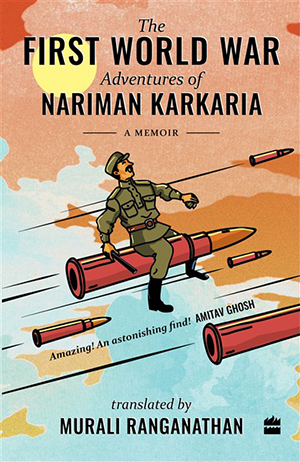 Karkaria, a young Parsi from Gujarat, had always wanted to see the world. So he left home as a teenager with fifty rupees in his pocket to do just that. After working in Hong Kong and Peking for a few years, in 1914, when war was in the air, he decided to volunteer for the British Army. Passing through China, Manchuria, Siberia, Russia and Scandinavia, he reached London early in 1915 and managed to register as a private with the 24th Middlesex Regiment. He was now a Tommy.

Incredibly, Karkaria saw action on three major fronts in the next three years. In 1916, he was in the trenches at the Battle of the Somme. After convalescing from an injury, he was sent off to the Middle Eastern Front where he fought in the Battle of Jerusalem in 1917. He was then transferred to the Balkan Front in 1918, where he served in Salonika. After being discharged, he returned to India and wrote a book in Gujarati about his years of travel and adventure, which was published in 1922.

The credit for bringing it back to life goes to Murali Ranganathan, a Mumbai-based historian and translator. Ranganathan’s research centres on the nineteenth century, with a special focus on Mumbai and western India. His translation, from Marathi, of ‘Mumbaiche Varnan’ was published in 2008 as ‘Govind Narayan’s Mumbai: An Urban Biography from 1863’. With equal felicity, he has turned to Gujarati.

The book is, as Amitav Ghosh writes in the foreword, “in every sense a unique work, in the story that it tells, in the swashbuckling manner of its telling, and not least, in the excellence of Murali’s translation, which convey’s the writer’s spirit so vividly…” Ghosh’s blurb says it all: “Amazing! An astonishing find!”

Karkaria joined the British Army during World War I and saw action on three different fronts. On returning home – Navsari, near Surat in south Gujarat, he shared his amazing adventures with many listeners and then started writing a column in a Gujarati newspaper. The column pieces were compiled in the form of a book. “One part autobiography, one part travelogue and three parts war memoir, the book manages to hold its own in a very crowded field of first-hand accounts written by soldiers who participated in the First World War,” writes Ranganathan in his introduction.

“A hundred years ago, in 1922, Nariman Karkaria published his First World War memoir in Gujarati. It is fitting that its English translation, ‘The First World War Adventures of Nariman Karkaria’, is being published on the centenary anniversary,” Ranganathan says in a release prepared by the publishers. “Never flinching from describing the horrors of war, Karkaria manages to retain both his sanity and his sense of humour during his five years in the British Army. The book sets a hectic pace as it takes us on a romp across China, Russia, and Europe with a detour in the Middle East. Written in the Parsi version of Gujarati and containing innumerable words that have never seen the inside of a dictionary, I had more fun than I bargained for during the translation. Besides, chasing the elusive Nariman Karkaria in the archives was exhilarating.”

Rahul Soni, Executive Editor, HarperCollins India, echoes Ghosh in terming this work as “truly an astonishing find”. “Imagine: more than a hundred years ago, a 16-year-old boy leaves his small-town Indian home to see the world, gets himself to China where he hears about an exciting war being fought on the other side of the world, decides he must be a part of it, travels over land across all of Asia and Europe to get there, enlists and becomes a soldier – and that is not even the most amazing part of the story! Not only does he then go on fight on three major fronts in three years, he also lives to tell the tale. A tale that eventually disappears in the mists of time, until it is unearthed almost a century later by Murali Ranganathan,” Soni says in a release.

“This is the only known book-length first-person account from an Indian serving in the First World War – and Murali has pulled off two great feats here – first, as a researcher, having excavated this text, and then as a translator, turning out a brilliantly readable English version of it.”