The Life and Times of George Fernandes 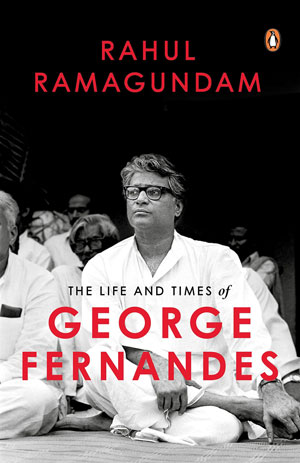 American linguist and public intellectual Noam Chomsky began his three-week India tour in late 2001 with a series of public lectures in the capital. As he was about to begin the first of them, the Ficci auditorium was already overcrowded but a man walked in, went to the front row and sat down. As Chomsky berated the US foreign policy in the aftermath of 9/11 and raised the question of human rights, the man listened on. When the speech ended, he left the venue quietly. That India’s defence minister would go to a public event as just another member of the audience – no fanfare, no security personnel – is unthinkable. But it would be exactly what one would expect if the minister was George Fernandes, the one whose official residence had its gates open all the time without any security personnel manning them.

Barely a few weeks later, he visited Gujarat that was ravaged by communal violence. As the army patrolled Ahmedabad, Fernandes defended the state administration against allegations of bias. In parliament, he said what had happened in Gujarat had not happened for the first time in the country and cited the Delhi violence of 1984 to silence Congress critics. When Prime Minister Vajpayee could make only one visit of the state and Home Minister Advani, who also represented Gandhinagar in the Lok Sabha, shied away from visiting the state for several weeks, it was Fernandes who made several visits to Gujarat as the representative of the central government.

It would be facile to say that his transition from an advocate of socialism to an apologist of cultural nationalism mirrored the transformation of Indian politics. In his case, it was his anti-Congressism-at-any-cost that often placed him in strange company.

Even by the standards of Indian politics that is blessed with a disproportionate number of mavericks, George Fernandes was an outlier. As the subject of a biography, he would be equally fascinating and challenging. Rahul Ramagundam spent more than a decade probing archives and talking to a large number of people – beginning with Fernandes himself in 2009. From the rich material, he has fashioned a gripping narrative in ‘The Life and Times of George Fernandes’ (Penguin, supported by New India Foundation).

Beginning with Fernandes’s childhood in the Mangalore of the 1930s and culminating in the fall from grace after the Tehelka sting and the coffingate in the early years of this century, this is “the story of India’s tortuous post-Independence making and the role of George Fernandes in it”. But it is, above all, the story of a unique life. A young man who could have become a priest turned to socialist trade union activism, and went on to lead some of the biggest strikes in India. A trade unionist who went on to defeat stalwarts in elections. A husband and father who sacrificed the joys and comforts of family life for his perilous missions. And a man who was consumed by a different kind of politics that came to dominate India after the advent of Indira Gandhi.

It was Mrs Gandhi and the Emergency that propelled Fernandes on the national stage. Travails began for him in June 1975, when he went to Goplapur-on-sea in Odisha, after much cajoling from his wife, Leila Kabir, to spend some time with the family at their mansion there. It would end with his astounding victory from Muzaffarpur in March 1977 while he was still in jail. Three chapters, running into about 100 pages, detailing Fernandes’s travails during these two years are a master class in biography-writing, as Ramagundam weaves an engrossing account, while sticking to sources, of the man on the run and the hunt to capture him. This section has more twists and turns than a Bollywood movie. More importantly, it is rich with telling details and images that make the writing come alive and lift this work above the recent spate of biographies of our post-independence leaders.

For detailing, consider the books mentioned in the section: To train and prepare a young Girija Huilgol, Fernandes prescribed a reading list: ‘MILA 18’ by Leon Uris, ‘Is Paris Burning?’ by Larry Collins and Dominique Lappiere, ‘The Moon is Down’ by John Steinbeck. (Much later, Jaya Jaitly would say he gave her British Labour leader Shirley Williams’ ‘Politics is for the People’.) In June 1976, as he was taken from Tihar to the district jail in Hissar, the books and medicines he had brought along were confiscated. What had he taken along for prison reading? Six works of Alexander Solzhenitsyn, one each by Fredrick Forsyth and Norman Mailer, a copy of ‘The Bermuda Triangle’ and the latest ‘Reader’s Digest’. Later, he “read the Bhagavad Gita ‘at least one hour every day in the morning’ and learnt Sanskrit grammar to read it expertly”. (Unwittingly or otherwise, he was doing precisely what Mahatma Gandhi and Sardar Vallabhbhai Patel used to do in Yeravda jail in Pune in 1932-33.)

Fernandes was a man of paradoxes. Ramagundam, who teaches history at Jamia Millia Islamia, does full justice to all aspects of his personality and seeks to answer the question: What explains Fernandes? “George’s consuming passion about defeating the Congress, bordering on hysterical obsession, entailed negligence of all other issues … His outlook drew from Lohiaite non-Congressism but had been hardened as well by his brushes with the Congress governments, even if he admitted that all governments, irrespective of the regime, were bad per se. His attitude was something like, ‘Let the country face the chaos but defeat the Congress’.”