Unbounded: My Experiments with Law, Physics, Policing and Super 30
By Abhayanand 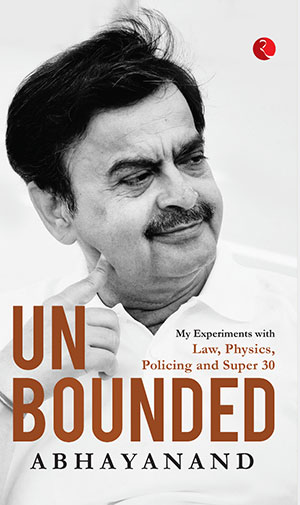 Abhayanand has been one of India’s most unconventional and celebrated police officers. He is also well known for having created the 'Super 30'. Being a full-time policeman, a full-time physicist, a full-time educationist and more, he reformed the badlands of Bihar. ‘Unbounded’ is a policeman’s tribute to his Force with a riveting story of grit, guts and gumption. Empowered with never-seen-before pictures, this book is a must read for everyone.

Abhayanand, a 1977 batch Indian Police Service officer of the Bihar cadre, was the 48th DGP of the state, following in the footsteps of his father, who was its 28th DGP. Since his retirement in 2015, he lives in the lap of nature, in a village on the outskirts of Patna.

What does it take to head the police department in a state with an intriguing political backdrop? How did a policeman move unarmed and fearlessly for 37 long years in Bihar? Can a tough taskmaster be a humanist at heart?

This book explores such compelling questions through the eyes of Abhayanand. Entering the world of police with the mindset of a physicist, he became a very unconventional police officer.

This is a tale of how his scientific mind remained ‘unbounded’, egging him to remain innovative in tackling crime. Through real incidents and experiences, the author, in his unique style, narrates how he used law over the muscle power of police in obliterating some of the most heinous crimes in the most unusual ways. He also presents a bird’s-eye view of the criminal justice system and the sociopolitical ambience of our society.

Bihar’s former director general of police (DGP) became a household name for the impact he created, so much so that criminals of all hues—from bahubalis to conmen—dreaded Abhayanand, not for his gun but for his intelligence and his steel grip.

The book also clears the mist surrounding the grand social experiment popularly known as ‘Super 30’, which he conceptualised and implemented in order to help underprivileged students make it to the prestigious IITs. Thereafter, he also created an equally successful ‘Rahmani 30’, which taught underprivileged Muslim students. This is the riveting story of a policeman, a physicist, a teacher and a humanist.

Crime is essentially an economic activity.

Have you ever wondered why criminals who loot tonnes of wealth remain poor, while there are people in society who have successfully accumulated enormous amounts of wealth and property with no ostensible source of income?

Let me explain this through one of my earliest experiences of nearly four decades of my policing career. A heinous dacoity gets committed in a small town of Bihar. Wanton violence and loss of a lot of property occur. Police is swift in detecting the crime, nabbing the criminals and recovering an insignificantly small part of the looted property. This becomes a success story for my seniors as well as my subordinates. I am unhappy. I am unsettled because I can’t stop thinking about the rest of the property that we could not recover.

Why didn’t the criminals have the entire loot? Where did the balance go? Who are the beneficiaries of the major part of the loot?

As a young police officer, I would often wonder why dacoits committed dacoities. The life that they led was far from cosy. Their activity was fraught with danger, including death in a police encounter. For what was it worth?

When any crime gets committed, be it a petty theft, kidnapping, gruesome murder or even a riot, the media is immediately ablaze. The focus is entirely on the details of the incident, how it can be politicized and which administrative machinery should be blamed. This script runs unexceptionally for every such case. In the end, they might even find out the ‘reasons’ behind the crime. What we don’t understand is that these reasons are just the symptoms of a plague that engulfs the roots.

I kept looking in the hope to find answers to these nagging questions. As years rolled by and as I gained more experience, I was able to observe some connection between this missing share of the loot and the ill-gotten wealth in the society. The shape and form would change, but the source essentially remained the same. The blue-collared criminals would graduate into white-collared ones.

I could see clearly that crime generates black money, and concomitantly black money fuels crime in society. The preponderance of black money in the economy of a State is a sure recipe for a journey towards a black alley. It is unfortunate that the police department is neither designed nor trained to track the trail of black money created in the wake of the series of crimes. We are traditionally trained to investigate, detect crimes, and bring offenders to justice. I, too, grew up in this school of thought and passed it on to my juniors.

With its evolution over the years, we now have given a creative name to the output of this cycle—‘money laundering’. We as a society are creating white-laundered assets of criminals. The consequence of this is very evidently visible, yet we choose to behave like ostriches. This money laundering has created another by-product, which I call ‘social laundering’—forming a class of people who are economically, and hence, socially powerful. These people have so much power that even the most honest policeman is not able to take them on.

My only silver lining was the Prevention of Money Laundering Act (PMLA), 2002. Unfortunately, this Act does not provide police with any power whatsoever. I felt so handicapped.

As the ADG (HQ), I tried to convince the CM that the State Assembly could also pass its own equivalent of PMLA. I had examined this issue and was convinced that the only vires that had to be kept in mind was: ‘no conflict with the Parliamentary legislation.’ I stuck to my point but was thwarted on the grounds of legislative competence.

The CM, however, agreed to request the Government of India to delegate some power to a designated officer in the state government as is the home secretary in the Unlawful Activities (Prevention) Act (UAPA). The request was made, but it never saw the light of day.

In my tenure as the DGP, I saw another CM for a few months only. I again discussed the issue of legislation, but there was no visible interest shown.

The fight against crime begins with the legislature. This is the organ of the State that creates the weapon with which the police fights crime. There was no weapon that I could use against black money. In my tenure of six to seven years as ADG (HQ) and DGP, I got a more positive response from the judiciary than the legislature in my efforts at creating such weapons at the state level. The only role I could play was that of a catalyst for the Enforcement Directorate (ED), the agency created under the PMLA for the execution of the Act.

The process that began was tortuous.

Bihar Police gathered relevant data and documents and made a formal proposal to the ED to initiate action against all hues and colours of gangs operating across Bihar. These included gangs of kidnappers, bootleggers, the ones who indulged in hooch tragedies, flesh trade, and the list went on. The police and the ED worked in tandem and in complete unison. Soon, ED had what it needed to pass confiscation orders of properties of illegal wealth and laundered white assets of gangsters.

Results were visible, and the impact on the psyche of the criminals was palpable. They were stunned because they had never expected this response from any police force. Bihar was perhaps the first state to have experimented with this idea in this form.

The media got curious, as they also had never seen anything like this before. The intellectuals in the society sang praises, as they felt this process was attacking the root of the disease.

Unfortunately, the police still hasn’t been given any power under the PMLA, but nothing stops them from being the driving force, making it worthwhile. It is high time that the mission statement of the police gets modified from ‘prevention and detection of crime’ to ‘detection of black money and prevention of laundering thereof.’