Excerpt from Mrinal Pande’s new history: Nationalist in pre-independence era, but mofussil afterwards; Hindi print media came into its own in the 80s GN Photo (For representation purpose only)

The Journey of Hindi Language Journalism in India: From Raj to Swaraj and Beyond

In India, the English-language media is considered the ‘national media’, while the language press remains ‘regional’.  However, from the 1980s onwards, demographic changes and growth in literacy in the Hindi heartland broadened the market for Hindi newspapers.

Well-known journalist and commentator Mrinal Pande – who was the first woman to become editor-in-chief of the multi-edition  Hindi  daily ‘Hindustan’ – has authored a comprehensive history of Hindi-language journalism in India: from its early days as nationalist newspapers in the colonial period, its subservience to the English print media in the early decades of independence and the fillip it received in the post-Emergency 1980s when an inclusive Hindi, propped up by regional dialects, became the best vehicle for furthering Indian democracy. 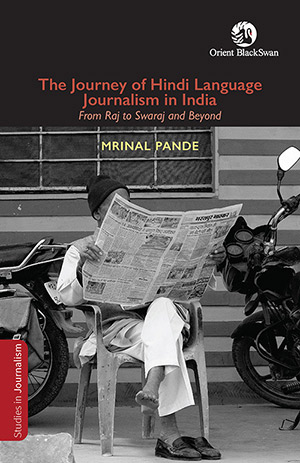 The book also focuses on the ongoing digitisation of all media, the increasing influence of social media platforms, and heavy reliance on advertisements.

Examining the close connections between politics, the corporates, and newspaper/news channels, the book asks: Can editorials continue to care for individual rights and local cultures, given their proximity to political and corporate lobbyists? How far will our Constitution-given freedom of information and speech stretch if media laws are amended?

Here’s an excerpt from the book:

It is a truth universally acknowledged in the market that readership data is the basic currency used to buy and sell media space. Seventy per cent of the media’s revenues are earned thus. But until the early 1990s, when anecdotal wisdom, not hard data, drove the game, India was a very different place for the Hindi media. In my long career as an editor, I handled various monthly and weekly Hindi magazines and the multi-edition Hindi daily, Hindustan, for two of India’s biggest media houses. All through, I heard various chiefs of marketing tell me that I should excuse them for not reading the ‘product’ themselves, as they did not read Hindi. But, they were always quick to add, they regularly checked with their barber, driver, ayah (nanny), khansama (waiter or cook) or house guard, and when asked, all of them said that it was a good read. The marketing managers also agreed that their ideal reader was not a ‘person like us’. It was someone who read Hindi only because they could not read English. Two well-known owners confided that they had deliberately chosen to retain their successful English publications’ name for their Hindi product, as it gave them an upmarket image in the English-crazy Hindi heartland. One of them told me that the aspirational small-town Hindi reader today must love to win friends and influence people among those they saw as having ‘arrived’. So by quoting the name of this Hindi magazine when talking about their reading habits, one could easily lure people into believing that the magazine being named was the English version.

By the late 1980s, from TV sets to denim jeans, the most coveted items for personal consumption for India’s upwardly mobile, urban middle classes were the imported ones. As ‘mind products’, in the new manager-ese fast becoming popular, Hindi newspapers and periodicals, even though they were registering vast sales, were considered somewhat lowbrow. Hindi print media was, to the uppermiddle-class India to which most young owners, ad agency executives and managers of major publishing houses belonged, something consumed by a low visibility, high financial risk universe: clerks, drivers, small shop owners, nannies, dhaba-wallahs (people who run wayside eateries) and housewives. When they fanned out to agencies offering space for ads, they basically promoted the house English dailies and threw in a special offer in the shape of a simultaneous placement of the ad in the Hindi daily for almost half the price.

Indeed, some of them felt truly mortified by the prospect of handling a Hindi product. Around the year 2000, at a group promotional function, the then marketing manager, I was told, did not wish to be photographed with the lower-grade marketing staff of the Hindi paper for fear of tainting her image as a smart, young marketing manager among her colleagues, and downgrading her worth in the market.

The Cunning Passages and Whispering Corridors of the Hindi Belt The Indian markets in the Hindi belt have harboured within them age-old cunning passages and whispering corridors. Brilliant young editors were men (myself being the sole exception, more or less): S. P. Singh of the Ananda Bazar Patrika Group driving a news weekly, ‘Ravivar’, Prabhu Chawla of the Hindi ‘India Today’, Manohar Shyam Joshi of the Hindustan Times Group’s weekly, ‘Saptahik Hindustan’, Rajendra Mathur, editor of the Times Group’s Hindi ‘Navbharat Times’, Prabhash Joshi, who launched the Hindi ‘Jansatta’ for the Express group, and scores of others dotted the field. They were never given their due until some of them began appearing on TV and became overnight celebrities in the field of news analysis and debate. But still, a glaring lack of proper staff and in-depth coverage of financial and corporate issues caused distortions in business reporting in Hindi and continues to this day.

The social snobberies of the managers and space sellers of Hindi media did not allow them to see how serious business opportunities had been slowly developing in the last two decades of the twentieth century in Tier 2 cities like Kanpur, Jalandhar, Jaipur, Pune, Nagpur and Raipur. Local business reporters, being largely absent, and the visible or invisible pressures on editors (and/or direct orders to bureau representatives from the managers/owners) to keep major sources of corporate and political advertising happy, often led to slanted interpretations, inaccuracies or plain untruths with no clear mention of sources. This was the time of the business boom of the mid-1990s, when IPOs (Initial Public Offerings) were increasing and verifiable business news were badly needed in Hindi among average, middle-class Hindi media consumers. But most CEOs and ad managers in mega publishing houses continued to strategise about how to attract more readers for their English dailies and cut costs for the Hindi dailies, which they were reluctant to promote despite visible proof that colour TVs, soft drinks, and all manner of white goods were being bought by the middle classes in small-town India and the rural rich in villages.

Gradually, the ambivalence of the Hindi print media towards advertising (based initially on a Gandhian worldview and later on class bias) was discarded. Around the mid-1990s, the larger sales figures of Hindi papers began to be too visible to ignore. As a matter of fact, the annual Indian Readership Surveys were also throwing up figures showing that in each part of India, vernacular print media was far outselling English, and stirrings finally began in the usually placid world of owners and managers. The capitalised billings for Hindi rose by over 30 per cent by 1998 (MRUC 2019b).

Two years later as the new millennium arrived, the advertisers’ worldview underwent a total sea change. In 2001, India’s decadal census highlighted a dramatic growth in literacy rates in the country. Among the most backward northern ‘BIMARU’ (Bihar, Madhya Pradesh, Rajasthan and Uttar Pradesh) states in the Hindi belt, Madhya Pradesh and Chhattisgarh (included in this grouping after its formation) registered almost a one-fifth decline in illiteracy within a decade and in Rajasthan, literacy rates jumped by over 22 per cent, when the national average for rise in literacy for the same period was a little above 13 per cent (RGCCI 2001). Television, first seen as an enemy, had proved to be a great friend of the print media, in that it made people more eager to read newspapers and extend and verify information. According to the annual National Readership Survey, there were 131 million readers for Hindi print in 1999. By 2002, their numbers had grown to 155 million, and by 2005, to 200 million (Ninan 2007: 15). So here was incontrovertible proof that by the new millennium, when the West faced a fast shrivelling of its print media, India had emerged as the largest publisher of print in the world with close to 6,700 publications and over 260 million copies distributed daily.