How to make elections more meaningful

Book Excerpt: ‘The Power of the Ballot’ celebrates Festival of Democracy in all its varied aspects 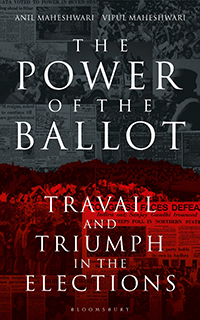 The Power of the Ballot: Travail and Triumph in the Elections
By Anil Maheshwari and Vipul Maheshwari
Bloomsbury, 382 pages, Rs 699

India’s democracy is known to be messy, boisterous, and noisy. With all its faults, it continues to function well. The day of elections is the day this democratic spirit is celebrated. The Election Commission of India rightly branded it as ‘Desh ka Mahatyohar’ – a sort of Festival of Democracy. And Indians love elections – to the extent that they may be even called Homo Electionus.

Anil Maheshwari, who has spent five decades in journalism, and Vipul Maheshwari, a prominent advocate in the Supreme Court, have authored a book that celebrates this festival in all its varied aspects. In 31 short pieces, the book covers the whole gamut of India’s elections. Here is one of the essays, focusing on the much-needed changes in the election system:

Given the distortions in the system, manning the elections, Navin Chawla, a CEC, admitted:

“Electoral reforms in India are long overdue. Yet, no government or political party has chosen to seriously address the proposals made by the ECI. Over the years many committees and commissions have been set up by various governments to study the issues but their recommendations gather dust. This is a pity because these reports were thoughtful, incisive and the result of painstaking work, where a large number of stakeholders were consulted and their views taken on board. Some of these reports are now too dated to have any reasons, but the spirit of their advice remains valid, which is to move the country towards cleaner politics by offering recommendations to reduce, if not altogether eliminate, the ills beginning to affect the body politic.”
[See: Chawla, Navin. 2019. ‘Every Vote Counts: The Story of India’s Elections’. New Delhi: HarperCollins, p. 226.]

Meanwhile, the ECI has also proposed to the government to extend the electronically transmitted postal ballot system (eTPBS) facility, so far available to service voters, to eligible overseas Indian voters. In a letter to the legislative Secretary in law Ministry on 27 November
2020, the ECI said with the successful execution of the eTPBS in the case of service voters, it was now ‘confident’ that the facility could also be extended to the overseas electors. But the government is yet to take a decision on the move as it will need wider consultations with all stakeholders before a final call is taken. [See: https://eci.gov.in/files/file/9236-proposed-election-reforms] The role of ECI and the need for various electoral reforms have become a moot point. The ECI has published 25 of the main recommendations for electoral reforms. Some of the recommendations are:

1. Aadhaar–voter ID linkage to weed out duplications and misrepresentations from the electoral rolls

4. Registration of new voters and change of address with one single form to address the confusion created

5. Starting online registration facilities at the school-or college-level for all prospective voters at 17 years of age so they can be enrolled in the electoral roll as soon as they become eligible at 18

6. The ECI also recommended four cut-off dates in a year to enrol as a voter—1 January, 1 April, 1 July and 1 October; while the Law Ministry has suggested two dates—1 January and 1 July (currently, only those who turn 18 by 1 January of that year are registered as voters)

7. The ECI has proposed to give out electronic versions of the voter ID card—EPIC—for the convenience of voters

9. Imposing a ‘silence period of 48 hours’ before polling on social media and print media

10. Giving ‘remote’ voting rights to domestic migrant workers out of them one, six and seven were accepted by the Government in December 2021.

“With the 73rd and 74th constitutional amendments in 1992, Parliament created SECs to conduct panchayat and municipal elections. The State Election Commissioners are appointed by the respective state governments and do not function under the ECI. Unfortunately, in recent times, the elections conducted by the State Election Commissioners, at least in some states, have come in for harsh criticism. Many state Commissions, such as in West Bengal and Andhra Pradesh, use the ECI’s electoral rolls as the basis for their elections. Some other states use the ECI’s rolls with modifications. It was agreed at a meeting of the State Election Commissioners with the ECI, in April 2000, that duplication in the preparation of rolls was unnecessary and wasteful. Not only that, it caused confusion in the minds of voters.” [See: Krishna Murthy, T.S. 2008. ‘The Miracle of Democracy: India’s Amazing Journey’. New Delhi: HarperCollins, pp. 68–69.]