‘The Boy Who Wrote the Constitution’

Excerpt: This fact-based drama on Ambedkar’s own recollections of his childhood can be transformative for children as well as teachers and parents 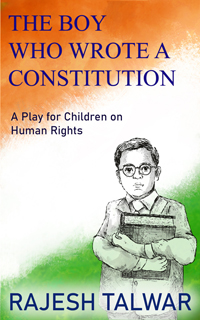 How can we acquaint children better with the life of Dr. Babasaheb Ambedkar? How about a play on his childhood? Rajesh Talwar, a lawyer and UN legal affairs officer (among many other things), has done just that. His latest, ‘The Boy Who Wrote a Constitution’ (Ponytail Books) is releasing on April 14, the birth anniversary of Dr. Babasaheb Ambedkar.

A fact-based drama based largely on Ambedkar’s own recollections of his childhood, it can be transformative for children as well as their teachers and parents. Talwar has used the fabulous device of weaving together major events from Babasaheb’s life story with scenes in which five children react to his life, struggles, and achievements in terms of their own identities.

‘The Boy Who Wrote a Constitution’ is a play that seeks to inform children, and simultaneously have them meaningfully engage with the challenging boyhood and growing-up years of the person who came to write the Constitution of India, Bhimrao Ramji Ambedkar.
Here is an excerpt from the play:

Solanki: Dr Ambedkar, sir, three days ago you have moved a proposal for the passing of the Constitution.

Solanki: Let me just say how proud our community is of you. (to the audience) Today we can truly say that our community has produced in Dr Ambedkar a great devotee, a great saint and a great philosopher.

The men seated on the stage clap as does the audience.

Ambedkar: Thank you for your kind words, Mr Solanki, but in truth I do not deserve such high praise. There were many illustrious people associated with the drafting of the Constitution.

Solanki: With respect sir, you do deserve the praise I have offered and much more. (pause) We have many journalists in the gathering here today. I will leave Dr Ambedkar to answer any questions that anyone might have.

First Journalist: Dr Ambedkar, I’m from the Times of India. Our paper is of the view that with your background and qualifications, you were the best person to be put in charge of the drafting of our Constitution. Oftentimes though, the best person is not chosen. How did this happen?

Solanki: Do you know why that happened?

Solanki: It was because everyone in that Committee knew that you were head and shoulders above anyone else in terms of your competence and abilities for this task. That is why! Once you were in the Drafting Committee you could not be ignored.
At this remark, a further round of clapping ensues.

Ambedkar: I will take this opportunity to express my gratitude to the Constituent Assembly and to the Drafting Committee for reposing in me so much trust and confidence, for choosing me as their instrument and giving me the opportunity for serving the country.

Second Journalist: I work for The Statesman,  Calcutta. Dr Ambedkar, sir, do you consider yourself to be a religious person?

Ambedkar: Let me respond to your question in one line. I like the religion that teaches liberty, equality and fraternity.

Second Journalist: Could you say a few words to us of the merits or demerits of this Constitution?

There is laughter and clapping from the audience.

Second Journalist: If that is the case what will happen if you find the Constitution being misused?

Ambedkar: (looking serious) If I find the Constitution being misused, I should be the first to burn it.

Third Journalist: Dr Ambedkar, I am Jaswinder Kaur from The Tribune. Sir, the Constitution will soon become the law of the land. Could you speak to us of any of your concerns and fears moving ahead?

Ambedkar: Thank you. That’s an excellent and important question. Let me speak to you of three fears that I have. The first fear is of the lack of unity within us as a people.

Third Journalist: Could you please elaborate?

Solanki: You are saying that a Constitution is important but the people are more important.

Ambedkar: Exactly. A second thing that concerns me is our tendency to worship our heroes irrationally and blindly. There is nothing wrong in being grateful to great men who have rendered life-long service to the country; but there are limits to gratefulness. In India, Bhakti plays a part in politics unequalled in magnitude to the part it plays in the politics of any other country in the world. Bhakti may be a road to salvation of the soul; but in politics, Bhakti or hero-worship is a sure road to degradation and eventual dictatorship.

Fourth Journalist: Peter Chase from The New York Times here. Sir, could you say a few words to us about the rights of women under the proposed Indian Constitution?

Ambedkar: I myself measure the progress of a community by the degree of progress that women have achieved. They will have equal rights under the proposed Indian Constitution.

Fourth Journalist: As a follow-up question, could you speak to us more generally about the move towards greater equality under the Indian Constitution?

Ambedkar: On 26 January, 1950 we are going to enter a life of contradictions. In politics we will have equality and in social and economic life we will have inequality. We must remove this contradiction at the earliest moment or else those who suffer from inequality will blow up the structure of political democracy that the Constituent Assembly has so laboriously built up.

Fourth Journalist: Could you say a few words about the problem of caste?

Ambedkar: Yes, I appeal to all Indians to be a nation in the social and psychological sense of the word by discarding the notion of caste. Castes have brought about separation in social life and created jealousy and antipathy between caste and caste.21

Solanki: Let me take this opportunity to thank all those who attended today. We will have more such discussions in the future.

The panelists on stage and the audience start to leave. The lights fade and in a few moments a beam of light focusses only on Ambedkar, who is now sitting very close to the edge of the stage.

Ambedkar: (monologue, speaking to himself) All those years ago I remember Masterji in school telling me how destroying certain books of the past that taught discrimination was important but not enough. More than two decades ago, we did burn the Manusmriti, but as Masterji said, what would create a far bigger impact would be to create a new document that would override evil and superstitious documents of the past. Is the Constitution such a document? Will it be enough? What does the future hold for my people? Time alone will tell.