A long road to diplomacy

Is Dhola-Sadiya bridge, in the northeast, India’s strategic answer to China? An aerial view of the Dhola-Sadiya bridge across the Brahmaputra

When India’s longest bridge, the 9.15-km Dhola-Sadiya over the Brahmaputra river, connecting Assam to Arunachal Pradesh, was inaugurated by prime minister Narendra Modi on May 26, China reacted angrily. As quoted by a news agency, China’s foreign ministry cautioned India to “exercise restraint” over building infrastructure in Arunachal Pradesh, a region which it considers its own. Mandarins of South Block, which houses the ministry of external affairs, were however unruffled by China’s outburst.

“They [China] keep on passing comments against India. In April, they threatened us with retaliatory measures when the Dalai Lama visited Tawang and other places across Arunachal Pradesh. But we keep on doing things unperturbed. We are building roads, bridges and other infrastructure in the northeast, because we are committed to bringing development to the region,” says an officer, who requested anonymity, in an unusual show of confidence that was usually missing a few years ago, especially when it came to speaking on China.
Sources, however, frankly admit that the infrastructural work being carried out in and around Arunachal Pradesh is more of a strategic kind. But this work, which has a direct link with the country’s security, has met with indifference of successive governments and bureaucratic apathy for years. “Roughly speaking, from 1992-93 onwards, some activity on border infrastructure building was started, but it was very slow. Before this, the successive governments at the centre, the army and bureaucracy were averse to development of roads and bridges along the border areas for several reasons: first, they thought that improved infrastructure would be advantageous to China’s PLA troops, and second, infrastructure in border areas mean they have to be protected,” says Nitin Gokhale, a senior defence and strategic analyst, who is currently with the Vivekananda International Foundation, a Delhi-based think tank.
In 2005, the United Progressive Alliance government headed by Manmohan Singh came up with an ambitious plan – special accelerated road development programme for northeast (SARDP-NE). The plan was launched after consultation with the chief ministers of all northeastern states, including Sikkim. SARDP-NE envisaged construction of a over 1,600 km road in the northeast, and included improvement of border infrastructure facility.
In 2013, the government pumped more money into the SARDP-NE and increased the road construction target to about 10,141 km – a gigantic task which, according to a document from the ministry of road transport and highways, was divided into two parts. In the first phase, as per the document, 6,418 km road was to be built by June 2016 and for this a total sum of '33,688 crore was earmarked. Despite this, only about “1,000 km have been built”, states a document published on the PIB website on February 5, 2013, indicating the snail’s pace at which connectivity programme of high strategic importance moved in the past one decade in the country.
While Pushpita Das, an expert on border security and management, attributes the tardiness on road construction activity to factors like land acquisition, bad terrain, climate and lack of technology, P Stobdan, a well-known strategic thinker who is attached with the Institute for Defence Studies and Analyses (IDSA), has a different take. “In terms of border infrastructure, you can’t see things in isolation. The situation in the country… your political culture and democracy, all things are so dysfunctional that even your street in Delhi is not clean. You can’t blame China for not building roads in India. Why you just talk about border infrastructure… you go to any office in Delhi… things are pathetic there,” he says bluntly.
Stobdan, who is known for taking the bull by the horns, adds, “China’s build up [of road and strategic infrastructure along the Indo-China border] is systematic and sustained, whereas we neglected it for years.”
Agrees Maj Gen (retd) Sheru Thapliyal. He says that while China has developed a vast network of border infrastructure in all the three sectors – eastern, middle and western – with roads, railway line and communication network, India has remained “sluggish” in laying infrastructure along the Line of Actual Control (LAC). As per the ministry of home affairs, from Jammu and Kashmir in the north to Arunachal Pradesh in the east, India and China share a 3,488 km border.
Under the NDA government, over Rs 40,000 crore have been allocated for the development of a road network in the northeast region, said Jitendra Singh, minister of state for the development of the northeast region (DoNER). Speaking to a select group of journalists in Imphal recently, Singh, who is also the minister of state in the prime minister’s office, said that “all infrastructure projects are progressing at a very fast pace and by 2020 the benefits of easy connectivity between the northeastern states and the neighbouring countries will start flowing into the region.”
Meanwhile, the ministry of road transport and highways has even decided to “take up the challenge of completing the task of building all road projects under phase I of the SARDP-NE in the next four years”, reveals a senior official of the ministry, adding that the centre has also started implementing phase-II of the plan, which envisages building 3,723 km road.
Amid this assurance, a new twist in the tale emerges. For the very first time, Japan has been roped in for the infrastructural build-up in the northeast. Locked in prickly relations with China over Senkaku Island and others, Japan’s JICA (Japan International Cooperation Agency) has taken up two road projects – one in Meghalaya and other in Mizoram. 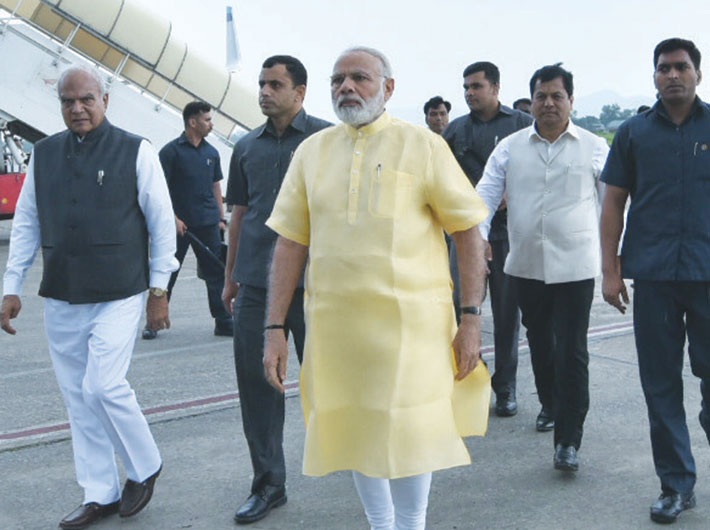 Prime minister Narendra Modi arriving in Guwahati on May 26. During the visit, he spoke of the role of the northeast in India’s Act East policy, and the push for infrastructure development for that purpose.

If sources are to be believed, JICA has also been approached for providing technical assistance for laying roads and other infrastructures like bridges and airports in the mountainous and seismically fragile Arunachal Pradesh. To confirm this, when Governance Now contacted JICA through telephone and e-mail, the agency refused to part with any information.
The bigger picture, however, is that despite a push from the centre for the development and connectivity in the region, there are still “some elements in the country’s defence establishment who are preoccupied with the old mindset and feel that if border areas remain undeveloped, Chinese troops will find it difficult to enter the Indian territory during confrontation,” reveal sources, while talking about the controversy surrounding the 2,000 km mega-infrastructure project that will connect Tawang with Vijaynagar. The project faced silent but forceful protests from the army last year.
The director general of military operations (DGMO) of the army objected to the project’s alignment as it was running close to the unmarked Indo-China border. Besides, there were other reasons too. “The army’s submission to the government was that the connectivity could be used by insurgents to slip in and out of the country. After incorporating some views of the army, the controversy surrounding the project has been resolved and the project is on now,” was the cryptic explanation from a senior South Block official. It reeked of overcautiousness on the part of the Indian defence establishment. A bit of this cautiousness can be seen in the Border Roads Organisations (BRO) construction activity also. Of 61 roads of 3,417 km length entrusted with this arm of the defence ministry for construction along the India-China borders in 2012-13, only 22 roads of 707.24 km length were built till December 2016.
In a written reply to Shashi Tharoor in the Lok Sabha on December 16, 2016, minister of state for defence Dr Subhash Bhamre admitted that “there are certain delays in execution of road projects”. However, he attributed reasons for the delay to “hard rock stretches, limited working season, difficulties in availability of construction material, delay in forest/wildlife clearance, and delay in land acquisition.”
And yet there is a feeling among strategists that India is of late on the move on its connectivity programme in the region. Take the case of the Dhola-Sadiya bridge. The ministry of road transport and highways cleared a feasibility study in August 2003. Construction, under SARDP-NE, began in 2011 at a project cost of '950 crore. Deadline for completion was 2015. “This deadline was not met because of land acquisition problem,” VK Rajawat, the project in charge and chief engineer of National Highways and Infrastructure Development Corporation under the ministry, said. “The issue was resolved  only after the NDA came to power, and the bridge construction started,” Rajawat told Governance Now. However, by the time the bridge was built, the cost escalated to '2,056 crore.
“Improved border infrastructure means addressing strategic asymmetry between India and China on one hand, and on the other it means further cooperation between them on trade and commerce front,” says Major Gen (retd) Thapliyal.
His views are echoed by Alok Bansal, a security analyst who is gung-ho about the benefits of the Dhola-Sadiya bridge for the connectivity-deficit northeast in general and security personnel in particular. “This bridge is a strategic asset of vital importance. It will facilitate movement of defence cargoes, including tanks and other heavy military equipment in border areas at a short notice,” he says.
Another dimension to the strategic aspect will be added when the 4.94 km rail-cum-road Bogibeel bridge will be open to the public in 2018. It will connect Dibrugarh in upper Assam to Dhemaji district, which touches Assam-Arunachal border.
shankar@governancenow.com
(The story appears in the June 16-30, 2017 issue of Governance Now)